Doubling Down on a Failed Strategy

David Vine, a TomDispatch regular, is associate professor of anthropology at American University in Washington, D.C. His latest book, Base Nation: How U.S. Military Bases Abroad Harm America and the World, has recently been published as part of the American Empire Project (Metropolitan Books). He has written for the New York Times, the Washington Post, the Guardian, and Mother Jones, among other publications. For more information, visit www.basenation.us and www.davidvine.net.

Amid the distractions of the holiday season, the New York Times revealed that the Obama administration is considering a Pentagon proposal to create a “new” and “enduring” system of military bases around the Middle East.  Though this is being presented as a response to the rise of the Islamic State and other militant groups, there's remarkably little that’s new about the Pentagon plan. For more than 36 years, the U.S. military has been building an unprecedented constellation of bases that stretches from Southern Europe and the Middle East to Africa and Southwest Asia.

The record of these bases is disastrous. They have cost tens of billions of dollars and provided support for a long list of undemocratic host regimes, including Saudi Arabia, Bahrain, Qatar, and Djibouti. They have enabled a series of U.S. wars and military interventions, including the 2003 invasion of Iraq, which have helped make the Greater Middle East a cauldron of sectarian-tinged power struggles, failed states, and humanitarian catastrophe. And the bases have fueled radicalism, anti-Americanism, and the growth of the very terrorist organizations now targeted by the supposedly new strategy.

If there is much of anything new about the plan, it’s the public acknowledgement of what some (including TomDispatch) have long suspected: despite years of denials about the existence of any “permanent bases” in the Greater Middle East or desire for the same, the military intends to maintain a collection of bases in the region for decades, if not generations, to come.

Thirty-Six Years of Base Building

According to the Times, the Pentagon wants to build up a string of bases, the largest of which would permanently host 500 to 5,000 U.S. personnel. The system would include four "hubs" -- existing bases in Afghanistan, Iraq, Djibouti, and Spain -- and smaller "spokes" in locations like Niger and Cameroon. These bases would, in turn, feature Special Operations forces ready to move into action quickly for what Secretary of Defense Ashton Carter has called “unilateral crisis response” anywhere in the Greater Middle East or Africa. According to unnamed Pentagon officials quoted by the Times, this proposed expansion would cost a mere pittance, just "several million dollars a year." 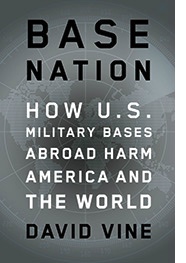 Far from new, however, this strategy predates both the Islamic State and al-Qaeda.  In fact, it goes back to 1980 and the Carter Doctrine. That was the moment when President Jimmy Carter first asserted that the United States would secure Middle Eastern oil and natural gas by “any means necessary, including military force.” Designed to prevent Soviet intervention in the Persian Gulf, the Pentagon build-up under Presidents Carter and Ronald Reagan included the creation of installations in Egypt, Oman, Saudi Arabia, and on the Indian Ocean island of Diego Garcia. During the first Gulf War of 1991, the Pentagon deployed hundreds of thousands of troops to Saudi Arabia and neighboring countries. After that war, despite the disappearance of the Soviet Union, the U.S. military didn't go home. Thousands of U.S. troops and a significantly expanded base infrastructure remained in Saudi Arabia and Kuwait. Bahrain became home to the Navy’s Fifth Fleet. The Pentagon built large air installations in Qatar and expanded operations in the United Arab Emirates (UAE) and Oman.

Following the 2001 invasion of Afghanistan and the 2003 invasion of Iraq, the Pentagon spent tens of billions of dollars building and expanding yet more bases. At the height of those U.S.-led wars, there were more than 1,000 installations, large and small, in Afghanistan and Iraq alone. Despite the closing of most U.S. bases in the two countries, the Pentagon still has access to at least nine major bases in Afghanistan through 2024.  After leaving Iraq in 2011, the military returned in 2014 to reoccupy at least six installations. Across the Persian Gulf today, there are still U.S. bases in every country save Iran and Yemen. Even in Saudi Arabia, where widespread anger at the U.S. presence led to an official withdrawal in 2003, there are still small U.S. military contingents and a secret drone base. There are secret bases in Israel, four installations in Egypt, and at least one in Jordan near the Iraqi border. Turkey hosts 17 bases, according to the Pentagon. In the wider region, the military has operated drones from at least five bases in Pakistan in recent years and there are nine new installations in Bulgaria and Romania, along with a Clinton administration-era base still operating in Kosovo. ...