The Battle Over Bike Lanes in Washington DC 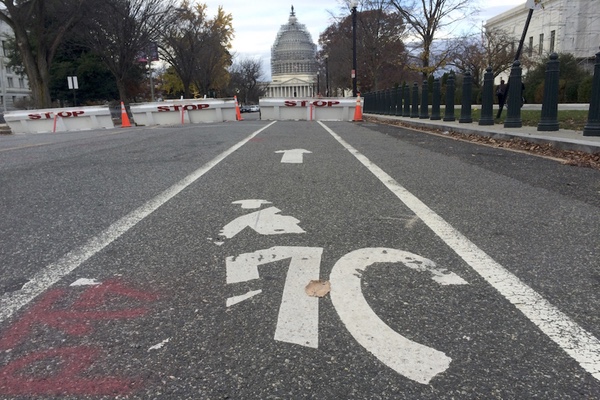 Bike lanes on Capitol Hill south of the U.S. Supreme Court. Photo by the author.

Bicycle lanes don’t cause gentrification and they are not necessarily products of gentrification. Yet, judging by the adversarial situations that have emerged in cities across the United States over the past decade, bike lanes appear to be inextricably tied to debates over whether gentrification is beneficial or damaging to neighborhoods and people.

In late 2015, urbanists and cyclists squared off in Washington, D.C., against African American church pastors and their congregations over proposed bike lanes in the city’s Shaw neighborhood (named for the Civil War Colonel Robert Gould Shaw, who commanded the famed 54th Massachusetts regiment of African American soldiers memorialized in the 1989 movie, Glory). Urbanists and cyclists argue that the bike lanes would improve safety and bring spillover benefits to neighborhoods. Opponents argued that the bike lanes would harm the churches by taking valuable street space mainly used for parking.

The race- and class-charged cyclists versus churches divide isn’t about better infrastructure, bikes, cars, and parking. It’s about space. The cyclists and city want to use space that historically has been unencumbered and used by neighborhood residents. At its most fundamental level, the debate turns on how public space is allocated and which uses are privileged over others.

Painted lines, bikes, and lycra-clad riders are symbols of political, economic, and demographic change in neighborhoods that have histories of disinvestment, benign neglect, and displacement. Bike lane proponents frequently don’t see beneath the paved street surfaces and building facades and they don’t easily grasp the symbolic significance bike lanes embody. Opponents, on the other hand, use the public engagement processes urban planning affords stakeholders to mount vigorous objections to encroaching change that historically has resulted in displacement. Middle ground often is difficult to find in these polemicized and often racially charged urban debates.

Though battles over bike lanes in gentrifying neighborhoods have erupted in New York City, Portland (Ore.), and Los Angeles, the polemics in Washington are set against a unique urban historical backdrop. For more than a century, Washington’s neighborhoods have undergone successive waves of creative destruction in the name of social reform, blight clearance, urban renewal, and since the turn of the millennium, hyper gentrification. 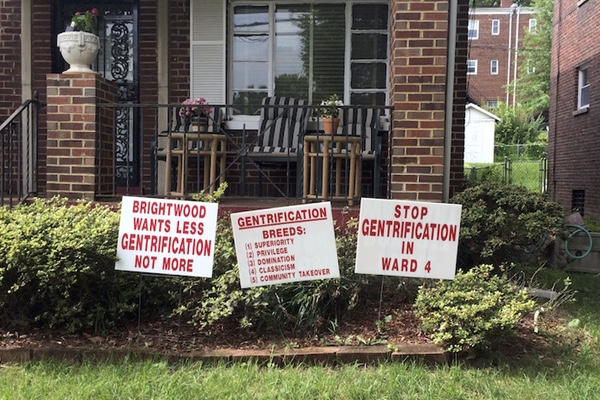 Signs in the front yard of a Brightwood home, a few blocks away from the signs illustrated above, opposing gentrification. Photo by the author.

Many of Washington’s changes have been driven by Congress and the federal government. This puts Washington in stark contrast to other old cities where politics and policy are local issues. For its entire history, federal authorities have used the city as a living laboratory for large-scale social and architectural engineering programs. The heavy federal hand guided by District outsiders is a layer above and beyond the typically local external forces in other cities that guide redevelopment projects.

The bike lanes proposed in Washington in 2015 would run north to south along Sixth and Ninth streets in the city’s northwest quadrant. They would run cut through Shaw, where in the twentieth century Jim Crow segregation concentrated African American homes, businesses, schools, and churches. It’s where the city’s answer to Harlem, the fabled U Street district, emerged. And, it’s where civil unrest erupted after Dr. Martin Luther King Jr.’s assassination in 1968.

Shaw is an urban land use artifact that is part organic development and part imagined community. African Americans who began concentrating there in the first half of the twentieth century did so because of displacement from other parts of the city due to gentrification or because of racially restrictive deed covenants prohibiting African Americans from owning and occupying properties in neighborhoods like Georgetown or Chevy Chase.

By the Cold War, the area was rebranded as an ambitious urban renewal district centered on the Shaw Junior High School. Like other Washington neighborhoods at the end of the twentieth century, Shaw was distressed and ripe for the redevelopment that never materialized under urban renewal. By 1970, African American residents were following whites to the suburbs. Building abandonment and neglect made Shaw an attractive area for private-sector redevelopment. In the first decade of the twenty-first century, residential and commercial displacement accompanied new waves of wealth and residents: gentrification.

Bike lanes, many observers note, often are caught in the middle of gentrification debates. In neighborhoods where street repairs, trash pickup, and police protection were difficult to secure before gentrification, the sudden appearance of basic services and new amenities like bike lanes are palpable symbols of change. As the Shaw kerfuffle shows, Washington is not immune.

Ross is part of a community of professional and avocational urban planners who write the Greater Greater Washington blog. It’s a site for which I’ve occasionally written since 2010. The blog regularly covers bike lanes and transportation issues and its authors frequently find themselves in heated verbal sparring matches with people Ross lumps into his NIMBY category: historic preservationists, gentrification opponents, and people perceived to be against developing cycling infrastructure. All, according to Ross oppose change out of fear or a desire to preserve social status.

Most of Greater Greater Washington’s writers – and readers, judging by comments left in posts about the proposed bike lanes – find little merit in bike lane opponents’ arguments. In November 2015 I queried other GGW writers and editors about the bike lanes and asked if in their opinion there was any acceptable solution or compromise that resulted in the bike lanes not being built.

Most of the responses I received unequivocally stated that a resolution without bike lanes would be the wrong direction. Most of the answers cited studies about the relationships bike lanes have with property values; safety improvements; and, general neighborhood improvements. Few found merit in ways to accommodate cyclists in the public right-of-way that didn’t involve painted, dedicated space (bike lanes). One respondent wrote, “That's just a resolution recommending the status quo which is currently unacceptable.” Another wrote, “We should not make policy decisions based on fear or worry or on the out-sized power of a handful of (self-perceived) losers of that policy.” 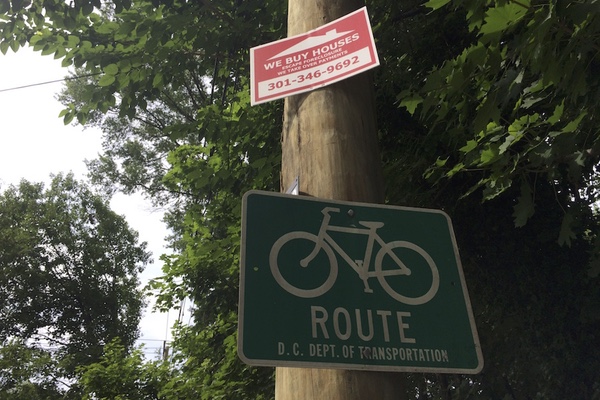 Bike route sign jockeying for attention with a “We Buy Houses” sign on a utility pole in Washington’s gentrifying Brightwood neighborhood. Photo by the author.

Much of the opposition to the proposed bike lanes has come from pastors from the United House of Prayer and the New Bethel Baptist Church. Comments made in an October 2015 public meeting focused on impacts to Sunday parking. Opponents strongly stated that they felt that the loss of parking spaces was unjust encroachment that would not benefit them or their neighborhood. United House of Prayer Pastor Robert Price III said, “We just think we have to protect what’s ours.”

Few among the urbanists calling for the bike lanes appeared to grasp that there are issues deeper than infrastructure, property values, and modes of transportation. One GGW writer published a post calling for empathy and compassion in understanding what bike lane opponents were trying to say. “Those of us who consider ourselves urbanists should look past how and what the churches are saying for a few minutes and think about why the churches saying it the way they are,” Aimee Custis wrote.

An understanding of history in Shaw and other urban areas where seemingly innocuous painted lines are proposed could help more urbanists like Custis see what other stakeholders are saying. Without context, urbanists like the GGW writer who replied to my email query will continue to make assertions based in assumptions, not historical fact.

“So if you wish to ascribe the history of displacement to those in the congregation, many of whom have decided to leave the City for whatever reasons, that is your choice,” one GGW author wrote to me. “This despite the fact that many long-time, in-towners have left the city for the suburbs for the same reasons as have others - bigger house, better schools, nice front lawn.  I would not debate that issue with you.”

The GGW author’s assertions underscore the basic problem in the bike lanes debate. The author – who chose to remain anonymous for this article – does not see the underlying conflict over contested urban space. He and other urbanists frame the debate in terms of infrastructure and economics.

Residents in neighborhoods with histories of serial displacement frame issues like bike lanes as ones of encroachment upon spaces they made their own over the span of decades. Urbanists who minimize neighborhood concerns by reducing them to NIMBYism or, as some in Washington assert, rich African American churches with large property holdings, exacerbate urban inequality issues by privileging their positions over the ones held by longtime residents. With bike lanes, it’s not so much displacement of people as it is the displacement of users competing for the same slices of urban space.