Do GOP Candidates Want Religious Freedom or the Closing of Mosques?  They Can’t Have Both.

John Fea teaches American history at Messiah College in Mechanicsburg, Pennsylvania.  He is the author of Was America Founded as a Christian Nation?: A Historical Introduction and blogs daily at www.philipvickersfithian.com

In the wake of the recent murders in Paris at least two GOP presidential candidates—Donald Trump and Marco Rubio—have said that American mosques should be shut down because they pose a security risk.  The assumption is that mosques serve as breeding grounds for ISIS, the Jihadist extremists who claimed responsibility for the Paris attacks and who have targeted the United States.

Last week Donald Trump said that the United States “will absolutely have no choice” but to close down mosques where “some bad things are happening.” Marco Rubio called for the closing of any place where “radicals are being inspired,” including mosques. Other GOP candidates have not been as overt as Trump and Rubio, but their attacks on the Muslim community in America, and their willingness to conflate all Muslims with ISIS, has been made abundantly clear. 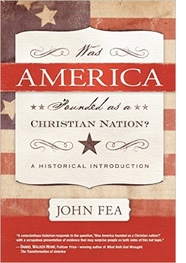 I am sure that Trump and Rubio realize that the closing of mosques, or any other religious institution or place of worship, is a direct violation of the religion clause of the First Amendment to the United States Constitution: “Congress shall make no law respecting an establishment of religion, or prohibiting the free exercise thereof.”

Not only are Trump and Rubio calling for the prohibition of the free exercise of religion among Muslims, but they are also implying that the United States is a Christian nation that has the right to threaten the right of non-Christians to worship freely. In other words, they are violating both the free exercise clause and the establishment clause.

How do these Republican presidential candidates justify these policies towards Muslims with their staunch commitments to religious freedom?

Until recently, conservative Christians rarely talked about religious freedom. When writing and speaking about religion and politics, many of them preferred to talk in terms of the United States as a “Christian nation.” Religious liberty was certainly important, and should always be defended, but this was a freedom usually invoked by religious minorities—Jews, Jehovah Witnesses, defenders of Native American spiritual practices—in a country in which Christianity was privileged.

The logic went something like this: “We are a Christian nation that welcomes and tolerates people of all religious faiths.”

Tolerance and religious freedom are not the same. A religiously free nation does not have an established church—either officially or unofficially. It is a place where adherents of every religion can worship God freely and openly without government interference.

Religious tolerance, on the other hand, implies that the government sponsors a particular version of religion—either officially or unofficially—but still allows people from other faiths to practice their beliefs. Several of the American colonies practiced this kind of religious toleration. For example, in Massachusetts Bay the Congregational Church was the established and official religion of the colony, but it eventually tolerated people who practiced other brands of Christianity.

Defenders of a governmental policy of toleration might respond to people of other faiths by saying, “We don’t agree with your beliefs, and we may not even like you being here, but we will tolerate you.” This is hardly a hearty endorsement of religious freedom.

But in the last year or so, the rhetoric of the Christian nationalists who defend something akin to religious toleration has changed. When Barack Obama pushed the Affordable Care Act through Congress, for example, Christians turned to the language of “religious liberty,” rather than the language of “Christian America,” to oppose the Obamacare mandate requiring employees of religiously based companies and ministries to provide employees with certain forms of contraception.

Many evangelicals, including most of the GOP presidential candidates, have also turned to religious liberty language to defend Kentucky county clerk Kim Davis’s decision to refuse marriage licenses to gay couples in the wake of the Supreme Court decision in Obergfell v. Hodges.

As the beliefs of traditional Christians continue to be challenged by the so-called “secular progressives,” more and more religious liberty cases will be brought before the courts.  But if the Christian Right is going to defend religious liberty, as they do every day on the campaign trail and in their various summits, conferences, and news outlets, they must be consistent.

The view of religious liberty currently espoused by Trump, Rubio, and others is just a new way of saying that the United States should be a Christian nation.  They want to defend the rights of Christians to practice their faith freely and without government intervention, but want to deny the same religious liberties to Muslims by closing their mosques.

It is time to stop the hypocrisy.