The Dirty History of White Supremacy

by Carl A. Zimring

Carl A. Zimring is Associate Professor of Sustainability Studies at the Pratt Institute. He is the author of Cash for Your Trash: Scrap Recycling in America and general editor of the Encyclopedia of Consumption and Waste: The Social Science of Garbage. His new book Clean and White: A History of Environmental Racism in the United States is available from New York University Press. 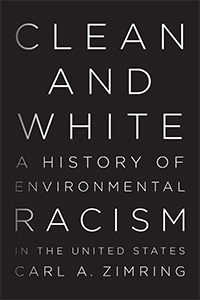 White supremacy is the organizing principle of the 2016 presidential race. It manifests in attacks on Mexican immigrants (caricatured by Donald Trump as invading rapists), Syrian refugees (denounced by most of the Republican field as potential terrorists), and the Black Lives Matter movement (denounced by Chris Christie and Scott Walker as a hate movement that threatens law and order). As President Barack Obama enters his final year in office, assertions of white identity as the organizing principle of domestic and foreign policy dominate the campaign to select his successor.

The virulence of the racism in this campaign is different from past campaigns in degree, but not in kind. New York Magazine columnist Frank Rich argued recently that the rhetoric is now merely explicit rather than implicit as “Trump is exposing the heart of a virtually all-white political party’s base by speaking its most repellent convictions out loud and unambiguously rather than let them continue to be cloaked in the euphemisms of most of his ostensibly more respectable opponents.”

Rich’s argument is supported by observing both the recent and distant history of the United States, including systemic “birther” attempts (by Trump and others) to label Barack Obama as a foreigner in 2008, the use of African-American rapist Willie Horton against Michael Dukakis as a candidate “weak on crime” in 1988, and many, many virulently racist campaigns in the nation’s past.

Obama’s citizenship was not the only racial challenge to his 2008 campaign. Speaking to a reporter for the New York Observer about the crowded Democratic field in early 2007, fellow candidate and future Obama vice president, Joe Biden, described Obama as “the first mainstream African-American who is articulate and bright and clean and a nice-looking guy.”

The comment did not hurt Obama. Instead, it sank Biden’s presidential campaign. Many white observers (reportedly including outgoing President George W. Bush) were confused that an attempted compliment might get Biden into so much trouble. African-American journalists had little difficulty explaining the offense. In the Boston Globe, columnist Derek Z. Jackson wrote that Biden’s comments: “sparked a debate about unconscious stereotypes about white people still being shocked in the year 2007 that educated black people can speak, take baths, or aren’t running off with your purse.”

Jackson’s comment about taking baths underlined the truly offensive nature of the comment. Writing in the Washington Post, columnist Eugene Robinson politely admonished the Delaware senator. “I’ll leave it to Joe Biden to explain (or figure out) why he used ‘clean’ as one of a logorrheic string of adjectives describing his Senate colleague Barack Obama. I’m not sure his initial revision and extension of his remarks – that he meant ‘clean as a whistle’ – get him off the hook.”

Robinson noted that Obama’s inevitable reaction attempted to deflect the most incendiary aspects of the comment, focusing on the misperception of Obama as the first articulate candidate for president. Obama stated: “I didn’t take Senator Biden’s comments personally, but obviously they were historically inaccurate. African-American presidential candidates like Jesse Jackson, Shirley Chisholm, Carol Moseley Braun, and [Al Sharpton] gave a voice to many important issues through their campaigns, and no one would call them inarticulate.” As Robinson noted, Obama did not reference the “clean” remark at all, nor its implications. Biden’s choice of words implied that Obama’s oratorical skills were certainly above average, and while the senator from Illinois had already established himself as a superb speechmaker, in context the compliment implied most men of African heritage were not good speakers. But why did Biden think to call Obama clean? The way that comment was received indicated that calling an African American clean somehow separated an exceptional individual from the norm – a norm where African Americans were considered less than clean. No mystery as to why Jackson and Robinson drew offense; the mystery is what prompted Biden to think of the term.

Whether conscious or unconscious, Biden’s choice of words revealed the troubling history of the United States’ particular system of classifying dirt. Rooted in the slave trade, white supremacy evolved to justify subjugation and act as a bulwark against the social upheaval of abolition and mass migration. The Ku Klux Klan was the most visible and extreme representation of white supremacy in the years after the Civil War. The KKK mingled Christianity and white identity in a toxic mix that affected who people elected to office and how blacks and whites made a living. The KKK used sex to demonize black males. The KKK’s terrorism was only the most extreme version of this racial construction. State legislatures wrote miscegenation laws that based public health on white purity at risk of pollution.

The politicization of biology extended beyond sexuality to produce newly corrosive explanations of skin color in the late nineteenth and early twentieth centuries. In high and low culture alike, Americans identifying as white found new ways to justify subjugating non-white people. These justifications shared the Klan’s obsession with purity to conflate white identity with sanitation at a time when the language and science of sanitation were lauded as saving American civilization.

These ideas about race were expressed in the halls of academe. Sociologists such as John R. Commons and Edward Alsworth Ross saw new immigrants and newly-freed African Americans as racial inferiors to native-born whites. Ross, in his book The Old World in the New (published on the eve of World War I), laid out a complex and occasionally contradictory racial hierarchy so involved that he ranked Jews from different parts of Europe. Ross claimed that the type of Jew depended upon the region, with Jews from Galicia being the lowest, people whose town “is but a hideous nightmare of dirt, disease, and poverty.”

The popular culture was obsessed with racial classifications and advertisers capitalized on them. Several soap and cleanser manufacturers boasted of products so effective that they made black, red, or brown features appear white. The ultimate proof of a cleaner was the claim that it could actually whiten skin by removing pigment. Lautz Brothers published advertisements with white men washing young African American boys with their soap. In both of these images, the blackness was literally washed away by the white soap. The ads bore the caption: “beat that!” Several other companies advertised soap that literally washed dark pigment off of the skin of African Americans, Native Americans, and Turks.

The consequence of these attitudes was that blacks and other minorities were forced to live in segregated communities and work in dangerous and dirty jobs. The more white Americans worried about dirt and disease the more inclined they became to employ others to handle wastes. As I discuss in my book, Clean and White: A History of Environmental Racism in the United States, these were jobs too dirty to be done by white people.

The Americans who suffered resisted subjugation. Watching the rollback of Reconstruction across the South, Booker T. Washington championed elevated hygienic standards as a way of uplifting the lives of African Americans. His “gospel of the toothbrush,” hygienic instruction at the Tuskegee Institute, and the founding of National Negro Health Week may all be seen as deliberate attempts to debunk the stereotype. In the twentieth century, the organization of African American janitors in New York City and Chicago under the Service Employees International Union in 1920 and the walkout of African-American sanitation workers in Memphis after two of their colleagues were killed by substandard equipment in 1968 mark expressions of dissent with the racialized waste labor markets that emerged. The Memphis strike attracted Martin Luther King’s involvement; the Nobel Peace laureate died aiding a sanitary workers’ strike. By the end of the twentieth century, community leaders, churches, and academics joined to protect vulnerable people of color subjected to toxic wastes. The attitude that white people were above handling or living near waste had produced toxic constructions of race.

These constructions continue to shape racism in the United States. Biden’s 2007 comment seems innocuous compared with the explicit racism voiced by Donald Trump eight years later. It is, however, part of a continuum in American history of white identity built upon the fear of contamination, a dirty history that continues to inform our politics and society.