This 98-Year-Old Historian’s Got Advice for You

Vaughn Davis Bornet is a professional historian who worked for many years at RAND. His doctoral work was interrupted when the Navy called him to duty on September 25, 1941; Barracks Officer at Naval Air Station, Alameda for several years, he got out only on December 31, 1945. His book of patriotic orations and essays is "SPEAKING UP FOR AMERICA" (iUniverse, 2011). His brand new book is "LOVERS IN WARTIME, 1944-1945." 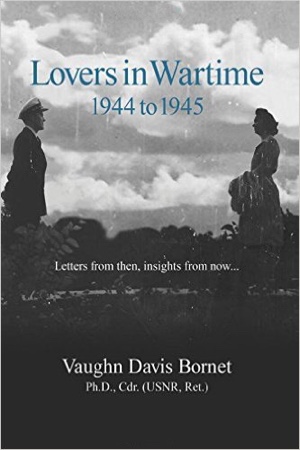 It does seem safe to say that most historians (and readers of history books) get preoccupied with writing or reading accounts about other people. Here we have a plea that the history crowd give thought to gathering together old letters and turning them into readable publications about The Past. Having published four versions of a book about his close family’s creation during wartime, this 98 year old historian now seeks to “spread the word” on the importance of piecing together family accounts likely to qualify as history. Lovers in Wartime, 1944 to 1945, took three years and boasts four typefaces. As you will soon see, this Emory, Georgia, and Stanford scholar and World War II veteran wants YOU to assemble and write your own family history, using those letters saved long, long ago.

After you tell me you saved “only” two dozen letters of those you exchanged, half a century ago, words between one of you far away in uniform, and the other moping back on the home front, please don’t think you convinced me that you two aren’t eligible to be part of “history.” It’s trite, but true, that quality not quantity matters most.

If you follow my guidance you are going to see your long saved letters, beautifully typed, bound with spiral or plastic, and under a light brown cardboard cover. There will be an appropriate photo from the distant past. This happy result will have a decided impact on one and all! How do I know this?

On my sad and lonesome birthday, October 10, 2012, I sat and contemplated a very large brown envelope that contained 209 letters exchanged between myself and a 20-2l year young lady during that year of war, 1944-45. She had been successively (1) my new acquaintance Beth, (2) my distant but increasingly dear lady friend for three months, then (3) my wife, expecting a new addition, (4) at last a well rounded university graduate, and (5) finally, a beginning housewife. From these attentively crafted late night letters would come a 296 page paperback and hardcover book and a large print version that ran 80 pages more. Even a Kindle edition turned up.

You, the reader, may well have saved love letters rich with sentiment, apprehensive letters from a military base, messages about travel overseas that involved danger, notes about life under miserable circumstances, maybe communications about hospitalization when wounded, or …. All are meaningful, and the good ones can be assembled, letter after letter, in a “publication.” They will become part of history. Equally important, your children and friends will show you their gratitude.

If a historian, do not print out your product without taking at least a stab at writing your version of a yearbook entry or two about the big events you refer to now and then in your letters. I wrote 13 essays to accompany our letters. (Don’t go that far!) Earlier I was paid to author formal encyclopedia articles embracing the years 1956, 1957, and 1960; my 1928 effort became a chapter inside a book. It could be said that the essays written for Lovers in Wartime were routine for me, as it turned out. Maybe you need not be so comprehensive given how much existing prose centers on Korea and Vietnam. An extended stay on your part in Walter Reed would hardly warrant full essays on hospitals, but prose evaluation in retrospect might still serve well.

This being said, a few brief essays you may create to fit well with your letters of long ago (offering context) will be surprisingly welcomed by those friendly readers in the know you are bound to attract. Why not begin now? My own large book treated a monumental year in human history. It contained D-Day, activity on bases like the Naval Air Station, Alameda, war on most continents, our difficult advance across the Pacific—and my efforts to run the Fleet Barracks as Lieutenant Bornet.

Given my higher education and the subjects I formerly taught and researched, I did not hesitate to offer memories of our family’s reaction to use of the atom bomb. While I was not fighting deep among the islands, I was hoping not to transfer “out,” so my tone was sometimes somber. I offered in careful prose my retrospective view that few in uniform in the United States in August, 1945 wanted to invade the Japanese homeland in autumn, 1945. All thought it would be fiercely defended in the manner we had faced recently in Peleliu, Iwo Jima, and Okinawa—even the Philippines. We had learned beyond doubt that Japan was a dedicated enemy. Without deep thought, we saw that the new and incomprehensible atomic weapon was serving our wellbeing.

As for guilt, we had been numbed by the years of bombings in England, Europe, Russia, and—yes, Pearl Harbor. Sometimes in the Pacific our losses had approached fifty percent. We were used to inflicting enormous casualties. We had fire bombed Tokyo. One island we expected to take in four days had instead taken seventy-four! As one in uniform before, during, and after Japan forced us into major war, who served as both an enlisted man and officer, I feel I write these provocative words as a surrogate for a vast array of Americans who shared my life on active duty in that day.

What I am suggesting is that “your little book” is entitled to convey truths about which You are quite confident. Historians who weren’t there will just have to try hard to grasp how you felt then about war waged in North Africa and Italy, the dangers we faced bombing Japan from China; the miserable cold of Korea so many endured years later; the mistakes made in Vietnam; and other matters contemporaries focused upon. Such events may get only silence these days, but reference to them may well turn up deep in “those letters we kept.”

Do not forget that here is an opportunity to place in permanent position that handful of pictures you and your loved ones took and treasured. You cannot possibly guess what new generations in your family will feel as they suddenly look on the healthy and smiling companions you lost back then. Your slender and muscular body of those years is pictured. There’s that sergeant or commanding officer you always said you hated. “So that’s the barracks you lived in.” “Surely gasoline wasn’t really 13 cents a gallon on the base during rationing?” ”Did you two really love each other as much as you say?”

Clear back in 1995 I put to bed my 300 page illustrated reminiscence, An Independent Scholar in Twentieth Century America. Here was a fully professional attempt (in the third person like Lincoln Steffens and Henry Adams in their day) to portray the past as I lived it. A Harvard journal thought it very good; but it’s not a model for or recommended to everybody. For you, a satisfactory publication may turn out to be as little as fifty pages. It will be produced by the print shop on the corner in several dozen copies; the cost (after professional typing) may be only, say, a hundred dollars all told.

What you, the reader, put together may really turn out to be invaluable, even though it may seem at first glance to border on irrelevant. No matter. “Give it your best shot!” History is largely comprised of anecdotal material. What difference does it make that you then wrote on cheap paper with an ordinary fountain pen or even a borrowed pencil.

Your memories—in your filed letters and in your head—carry some weight. The book title Everyman His Own Historian was chosen by the great Cornell scholar Carl Becker in my day and was much noted. He didn’t know that would be the case, but his slogan as coined for and addressed to an elite assemblage has been lasting. As quoted here it remains pregnant with meaning. It is my considered opinion that those words can and should be applied to YOU.