Rockwell Stensrud is the author of Newport: A Lively Experiment 1639-1969 (Redwood Library Press, 2007) and Inventing Rhode Island: Six Lives (Parenthetical Press, 2014). This past September he penned another piece for HNN: “There’s a Reason Newport Should Be Celebrated.” 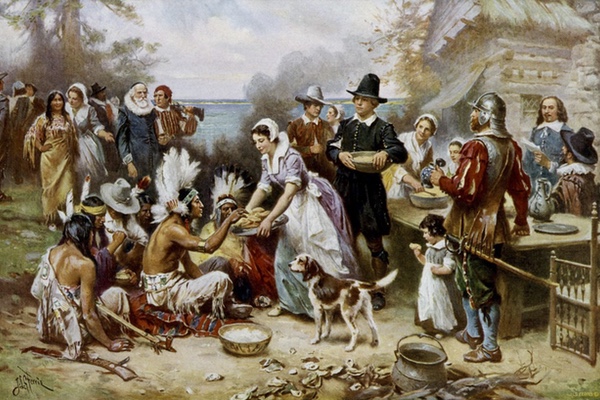 “Do you know the difference between a Pilgrim and a Puritan?”

That’s a sure-fire ice-breaker when party conversation comes to a halt. You’re likely to get a range of answers, many humorous, mostly wrong.

Once past that hurdle, your follow-up will probably yield as many misfires: “Who hosted the first Thanksgiving?”

Be sure to give your interlocutor sufficient time to frame his or her response. It’s important not to appear bemused.

Then, quickly: “Who attended the first Thanksgiving?”

The confusion has been manufactured. Pilgrims and Puritans have been melded together as one magical species by mythmakers in Massachusetts, identified by their broad-brimmed black hats and stylish buckle boots. In our mind’s eye there’s a man with a turkey slung over his back, on his way to the First Thanksgiving with some friendly Native Americans.

That image needs some fine-tuning.

They were all Protestants, Pilgrims and Puritans alike; they differed in doctrine and the intensity of their demand for reform. While both adhered to the teachings of John Calvin and abhorred the tenets of Jacobus Arminius, a significant conviction distinguished one group from the other: Pilgrims were radical Puritans who had abandoned local parishes and formed their own congregations because the Church of England was not devout enough for them. They were called Separatists. Their renunciation was an ecclesiastical insult to the monarch as head of the Anglican Church and a sure ticket to the Tower of London if they were caught in an illegal service. Around a hundred Separatists left England in 1607-08 in search of religious freedom in the Netherlands; many of them later migrated to America in 1620 aboard Mayflower.

The Pilgrims arrived in New England in November 1620, after a difficult 66-day crossing, with few provisions. They were not prepared for the harsh winter, and they had few agrarian skills or hunting acumen. These geography-challenged self-exiles (whose intended destination was not Cape Cod) would likely have died had it not been for the good graces of the English-speaking Indian Squanto who, along with local Wampanoags, taught them how to fish and live off the land.

The others were mainstream Puritans, or Nonseparating Episcopalians, who retained attachment to the English Church but were determined to rid it of remnants of Roman Catholicism. Their prospects of escaping the prosecutorial wrath of King Charles I and Bishop William Laud were looking grim, so, in 1630, John Winthrop led some 1,000 English Puritans in the initial wave of the Great Migration to form the Massachusetts Bay Colony, north of Plymouth. For those who believed in simple Sunday services based on the Bible, without the intrusion of rejected rituals, it was time to leave the home country.

Over the next decade, thousands more Puritans migrated to Massachusetts. The simpler, reclusive Pilgrims stayed close to home while the more aggressive, land-hungry Puritans spread out within the Bay Colony and into Connecticut, New Hampshire, and Maine. Winthrop and the magistrates stifled dissent, mandating that the orthodox Congregational covenanted church was the only road to heaven. They tied up church and state so thoroughly that colonists could never escape the stranglehold. Those who were found guilty of heresy or had the good sense to evade Boston’s dragnet founded Rhode Island so they could pray as they pleased.

The Pilgrim Saints were conciliatory, inclusive. They were at peace with their decision to defy the Crown as a matter of religious principle.

Bay Colony Puritans had another view of America: they were certain of their God-given superiority and ruled New England as they pleased.

The divide between Pilgrims and the Great Migration immigrants was deeper than it appeared. Contrary to the Bay Colony’s assurances to London that Boston’s ecclesiastical heart was still firmly beating in sync with the Church of England, communities formed blatantly Separatist congregations in defiance of the king. They accepted no bishops. Winthrop’s followers were living a lie.

Every child knows that the Pilgrims (the radical Separatists) hosted the First Thanksgiving. It’s hard to imagine Massachusetts offering a feast of thanks to local Native American tribes. They had no intention of sharing food or land. Indian tribes were an impediment, a distraction to be dismissed, an enemy to be defeated while they went about erecting their city upon a hill.

America celebrates Thanksgiving each November because of the Separatists. It is their defining foundational gift—welcoming, accommodating, communal. The sharing of food that we celebrate today started at that improbable feast in Plymouth.

The venison, turkey, corn, and squash served by the Pilgrims in the autumn of 1621 to Massasoit and some ninety Wampanoags was a gesture of appreciation for their help in sowing and reaping the settlers’ first harvest. It was a remarkable feat. During the first winter, Mayflower passengers had faced starvation or annihilation. They had little except a will to survive and the good sense to enter into a diplomatic and military pact with Massasoit. In just ten months the Pilgrims were able to produce sufficient food from the land, sky, and sea to feed one hundred people. That they could host a three-day festival of community and friendship so soon after such a fitful start was, for them, evidence of God’s blessing.

That Thanksgiving was a seminal achievement in international cooperation—but also an unfortunate harbinger of future relations. It took place at the very beginning of the cultural exchange when optimism was high, yet the celebrated feast was not repeated in the colonial era. Dissention and war won out, and a century later Europeans had driven New England Native Americans off their ancestral lands. Technology spurred the transformation, but the sheer number of immigrants simply overwhelmed the Indians.

Nearly 250 years later Abraham Lincoln revived Thanksgiving during the depths of the Civil War. Searching for a symbolic peace, an occasion that might draw the North and South closer together, on October 3, 1863, the president proclaimed that the last Thursday of November would henceforth be Thanksgiving Day. A very early American tradition was revived.