What Grade Does Ben Carson Get in Civics?

Among Ray Raphael’s nine books on the Founding Era are Constitutional Myths (2013) and Mr. President: How and Why the Founders Created a Chief Executive (2012). His most recent work is The Spirit of 74: How the American Revolution Began (2015), coauthored with his wife Marie. 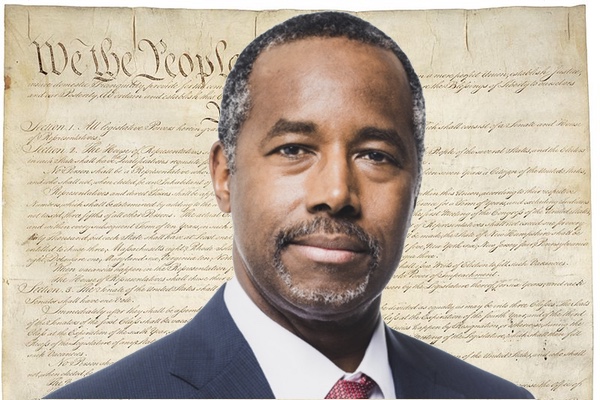 Bracing for yet another right-wing assault on taxes and federal powers, I opened Ben Carson’s latest bestseller—A More Perfect Union: What We the People Can Do to Reclaim Our Constitutional Liberties. At the outset, much to my surprise, I read that the United States Constitution was written first and foremost to grant Congress broad authority to tax as it pleased, a historical truth that many on the right prefer to ignore. Might this really be a balanced look at the Constitution?

Carson presents his book as a Constitution primer for those who have never examined the document. Calmly, as is his manner, he walks readers through the powers granted to the federal government: “From borrowing money to regulating trade to establishing an army, Congress has the right to do whatever is ‘necessary and proper’ to keep the country moving.” Bailouts are both constitutional and appropriate when bankruptcy “would have such a negative impact on the entire nation.” Income taxes? Perfectly legal, according to the Sixteenth Amendment. Eminent domain? “If the government can demonstrate that the property is needed for the public good and provides full compensation, the property owner has no recourse.” None of this is likely to win over Tea Party voters.

Carson feels comfortable in acknowledging federal powers because, “fortunately,” they are balanced by the Bill of Rights, which has “shielded us” from “further encroachments” by the government. Historically, this resulted from a grand bargain between Federalists and Anti-Federalists during the ratification debates. Although Anti-Federalists were “vocal in their opposition,” he writes, “they eventually assented to the creation of a strong central government, but they insisted on countering it with the first ten amendments to the Constitution, otherwise known as the Bill of Rights.” Taken together, the original Constitution and the Bill of Rights comprise a complete package: powers granted, liberties protected.

It’s an appealing narrative, but in fact there was no grand bargain. Anti-Federalists did not “assent” to the new Constitution, any more than anti-war activists assented to the Vietnam War or opponents of Obamacare assented to that legislation. Outvoted but angered in each case, dissidents continued their opposition. The struggle during the ratification debates did indeed result in the first ten amendments, but these, contrary to the wishes of Anti-Federalists, did not reign in federal powers in ways they deemed critical.

To quiet dissent and preempt a second convention, which would likely undo some of the work of the first, James Madison proposed amendments to the First Federal Congress. Working from the long list of propositions passed by state conventions, he deliberately selected those that would not weaken key powers of the federal government: no checks on federal taxation, a standing army, war making powers, etc. There was one exception. All states proposing amendments had asked for a declaration that powers not delegated to the federal government be reserved to the states or the people, the genesis of the Tenth Amendment. Technically, this did not alter federal powers—already, the federal government could only exercise those powers granted by the Constitution—so Madison ceded, but not entirely. Most state proposals wanted to reserve powers not expressly delegated to the federal government (New York said clearly), which would have negated any notion of implied powers and severely weakened the federal government. When South Carolina Anti-Federalist Congressman Thomas Tucker, observing that Madison had deleted “expressly,” moved to re-insert it, he was soundly defeated. Federal powers remained as they were, scarcely affected by Madison’s amendments.

Ben Carson did not invent the idea that a bargain between Federalists and Anti-Federalists produced the Bill of Rights, with both sides satisfied in the end. Nor is he alone in believing that the Bill of Rights, blended with the body of the Constitution, resulted in some loosely defined set of “Constitutional Liberties” that check federal powers in operational ways. These are mainstays of civics courses taught at every level. So, too, is Carson’s statement that “checks and balances” were instituted to “curtail federal power.” This is commonly stated in civics texts, even though the allocation of powers within the federal government is a very different matter than the extent or reach of federal powers. Insofar as they are related at all, checks and balances allowed for the extension of governmental authority. Precisely because the framers wished to strengthen the central government, they needed to guard against the consolidation of power within that government by instituting an extensive system of internal checks.

That Carson has channeled standard civics courses should come as no surprise. Like a school textbook, he addresses a broad audience by reducing complex political processes to simple renditions that please and inspire. The Constitution becomes kinder and gentler, its rough edges smoothed by the Bill of Rights. So, for walking his readers through high school civics, give Ben Carson an A. If I could grade the course itself, however, I would give it a D, or with grade inflation, and in the interests of national unity, perhaps a respectable C.

History is a different matter. “A little knowledge of history can go a long way,” Carson writes to open his second chapter. To illustrate this, he tells how his mother, in her search for a used car, made a wise decision: “With a little research, she was able to discover the history of the vehicle and learned that it was an absolute lemon.” Carson’s research, like his mother’s, is little. We can surmise his historical methodology by the sources he references: David Stewart’s The Summer of 1787, The Heritage Guide to the Constitution, Ayn Rand’s Philosophy: Who Needs It, History.com, Teaching American History website, National Archives’ lesson plans for Constitution Day, and so on. From these, and from such sources as “Thomas Jefferson Quotes” (on the Monticello website) and Respectfully Quoted: A Dictionary of Quotations, he extracts what we call today sound bites of the Founders, devoid of all context. Thomas Jefferson, who warned so often of governmental overreach, appears to be his favorite. It is no wonder that Carson makes no mention of President Jefferson’s strong-arm tactics to enforce the Embargo Acts, widely seen as the greatest application of governmental authority upon civilians until the Civil War. The sources he consulted would have no reason to report this.

“A little knowledge” is also “a dangerous thing,” but that popular saying does not appear in Carson’s book. The problem with drawing on “little knowledge,” in history, is that the process of selection —which “knowledge” to highlight—is entirely subjective, with none of the constraints that context inevitably imposes. Here, in his unbalanced selection of material, Ben Carson is at his worst. He complains about the “handouts and preferential treatment” that private interests receive “in return for campaign contributions,” but he says not a word about Citizens United and related decisions that have crippled campaign finance reform. By contrast, he goes on at great length about teachers in Nebraska being told not to call pupils “boys” or “girls” and other extreme instances of “Political Correctness.” In his closing “call to action,” he makes his most urgent appeal: “Are we willing to stand up against the PC police?”

Carson laments the use of the Fourteenth Amendment to expand federal debt but says not a word about its legitimization of corporate personhood. When discussing the Fifteenth Amendment, he complains that “society is still plagued by people who propose and enforce policies that encourage the descendants of the freedmen to accept a state of social dependency.” These “manipulative people,” he says, then offer “a few perks and promises” to cultivate “a significant power base” that will always vote their way. To be fair, he also condemns those who “try to disenfranchise minority voters by putting obstacles in their way,” but these evildoers are only “few in number.” Few in number, perhaps, but with sufficient influence to impose obstacles in several states—does Ben Carson truly not see this?

Carson is not alone. Slanted perspective is the signature tactic of political persuasion, and he is, after all, running for political office.