Flora Fraser is the author of The Washingtons: George and Martha, “Join’d by Friendship, Crown’d by Love” (Alfred A. Knopf, November 2015) 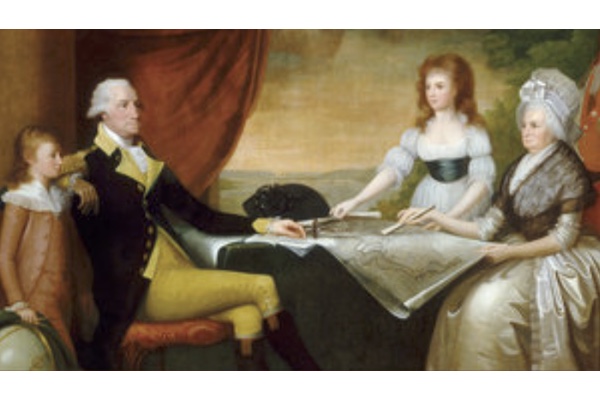 Some ten years ago I toured the Washingtons’ Virginia home, Mount Vernon, for the first time. Greatly to my surprise, my overwhelming impression was that the mansion, so decorous and elegant, had a very English atmosphere. The many American schoolchildren queuing to tour the national shrine might have served to dispel any such notion, but there was this justification: George and Martha stocked and embellished the house during the years of their marriage when they were content colonial subjects. Fresh from writing my book, Princesses: The Daughters of George III (2004), I had the heretical thought that the monarch and his wife, Queen Charlotte, keen sightseers, would have enjoyed a visit here. 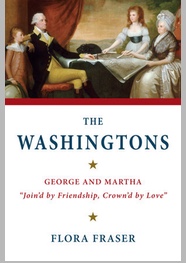 Back in London, I began to read about George and Martha and about this conservative couple’s journey into radicalism. Encouraged by my American editor, Robert Gottlieb, I resolved to write a book about their forty-year marriage.

The University of Virginia’s publishing project, The Papers of George Washington, Digital Edition was a rich source to mine. I was fascinated to learn that Martha was with George in makeshift winter headquarters every one of the eight years of war. She was at Valley Forge in 1778, when word came that France was newly the United States’ ally. She was at Morristown in 1780 in the hard winter, when officers and men in the tents were buried like sheep under snow. She was at the general’s side at Newburgh, New York in the spring of 1783, when news came that Britain had declared an end to hostilities. I toured these revolutionary sites with enthusiasm. Tramping through snowdrifts at Jockey Hollow, Morristown in late December 2012, I was thrilled that conditions replicated those of 1779 -1780.

As I travelled around America’s eastern seaboard, it became important to answer this question. Why would Washington ask his wife, time and again, to commit to arduous journeys from Virginia to join him in rough lodgings? When he was elected commander-in-chief in the summer of 1775, he was concerned that his wife would be lonely at Mount Vernon without him. He reassured her, from Philadelphia, of his devotion to her: “You may believe me, my dear Patsy . . . I should enjoy more real happiness and felicity in one month with you, at home, than I have the most distant prospect of reaping abroad, if my stay was to be Seven times Seven years.”

Washington was lonely and out of sorts without Martha. He ended by asking her to come to him. By late December, she was charming congressional and diplomatic visitors at headquarters, and bearing the vicissitudes of war with aplomb. She wrote to a Virginian friend, “some days we have a number of cannon and shells from Boston and Bunkers Hill.” It became an established fact that Martha would join her husband at the close of each campaigning season, and leave him before the opening of the next. Officers and aides welcomed Martha’s presence in camp. Her husband’s mood softened and his spirits improved. General Nathanael Greene wrote home to his wife in Rhode Island from Morristown headquarters in the spring of 1777: “Mrs. Washington is excessive fond of the general and he of her. They are happy in each other.”

At the close of the war George submitted to Congress “Lawful” expenses for reimbursement. He included “Mrs. Washington’s travelling Expenses in coming to and returning from my winter quarters annually . . . .” He had been obliged to eschew any visit home to Mount Vernon by “the embarrassed situation of our [national] affairs”. He therefore judged his wife’s travelling expenses—£1,064, 1 shilling—“the consequence of my self-denial” and a “Lawful” charge. Congress paid up.

Martha told her brother-in-law Burwell Bassett in December 1777: “he [George] cannot come home this winter but as soon as the army under his command goes into winter quarter he will send for me. If he does, I must go.” The call came, and she headed north for headquarters at Valley Forge, Pennsylvania. Accustomed to a luxurious home with every comfort, she shared tavern bedchambers with George for long months and inhabited cramped, rented rooms in New Jersey, Pennsylvania and New York State. When there were not enough secretaries to copy correspondence, she lent a hand. At dinner with the “family,” as the commander’s aides and secretaries were known, she sat on camp-stools to eat off tin plates.

Martha rarely complained in her correspondence. There was always the danger that letters might be intercepted by the enemy. Once only, she dropped her guard. She was describing, in 1780, the recent atmosphere at the Morristown headquarters to her brother-in-law, Bassett: “There was not much pleasure there from the distress of the army and other difficulties …. The poor General was so unhappy that it distressed me exceedingly.”

The eight years of war strengthened both Washingtons’ characters, and bound them together as a couple. Martha’s son, Jacky Parke Custis, died from ‘camp fever’—typhus—contracted at the siege of Yorktown. Washington, usually the dutiful servant of Congress, deferred participation in victory celebrations to support his wife. But both George and Martha travelled shortly after to headquarters at New Windsor, New York. The fight for independence was too important to let private grief obtrude for long. Long after the war, following her husband’s death in 1799, Martha commissioned a memorial miniature of George as a keepsake. In this delicate image, he appears not as the president, but in uniform. Washington had been a colonial officer when he courted Martha in the late 1750s. She chose to remember him during those brutal, heady, dramatic years twenty years later when he had been commander of the Continental army and she, his rock and support.