Timothy Snyder is the Housum Professor of History at Yale University and a member of the Committee on Conscience of the United States Holocaust Memorial Museum. He is the author of Bloodlands: Europe Between Hitler and Stalin, which received the literature award of the American Academy of Arts and Letters, the Hannah Arendt Prize, and the Leipzig Book Prize for European Understanding. His latest book is Black Earth: The Holocaust as History and Warning (2015). (Image on the HNN homepage of Auschwitz is by Michel Zacharz AKA Grippenn[1] (Own work) [CC BY-SA 2.5], via Wikimedia Commons.) 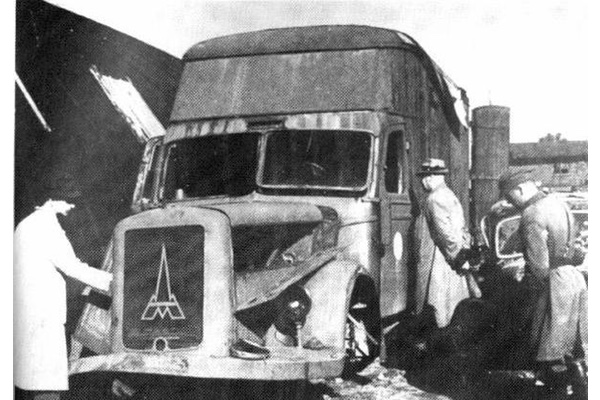 "Destroyed Magirus-Deutz furniture transport van Kolno Poland 1945" by original uploader in the Russian Wikipedia was Zac Allan, and then Jaro.p - Gas Van in EinsatzgruppenArchives.com archived by Wayback. Originally from the archives of the Polish Ministry of Justice. Was printed in Gerald Fleming: Hitler and the Final Solution. Berkeley : University of California Press, 1984.. Licensed under Public Domain via Commons.

Related Link 60 Minutes:  A priest is determined to find forgotten victims of the Holocaust whose bodies lie in unmarked mass graves in the former USSR

For Germans, Auschwitz was a way to limit responsibility. Germans could say that they had not known what had happened inside its gates. The fact that millions of Germans saw the Holocaust as it unfolded as mass shooting in the East could go unmentioned.

For Soviets, Auschwitz was a way to westernize responsibility. In the mass shooting in the East, the German collaborators were Soviet citizens. This is a brute fact more easily displaced than explained, in the USSR then and in Russia now. 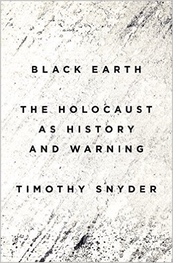 For Poles, Auschwitz was a way to introduce victimhood. The camp was indeed built to punish Poles, and by the end of the war non-Jewish Poles were indeed its third-largest victim group (after Hungarian Jews and Polish Jews). Places such as Treblinka, where larger numbers of Polish Jews were killed, were neglected and forgotten.

In the West, Auschwitz can render the Holocaust an abstraction. Whether presented as the endpoint of a German plan, the consequence of dehumanization, or the endpoint of modernity, it has become the anchor of a negative teleology rather than a historical time and place.

Historians of Germany have long argued the killing fields must be explained before the iconic death facility at Auschwitz. The facility, horrible as it is in its own right, is part of a sequence that began elsewhere. The use of gas, which tempts us away from history towards philosophy or literature, was an improvisation that followed rather than preceded the beginning of total killing.

Germans murdered about a million Jews by gunfire in the occupied USSR by the end of 1941. The recruitment of locals was meant to reduce the psychological impact on Germans. Gas served the same purpose. The exhaust pipes of trucks were refitted so that fumes were piped into the hold. At Chelmno the innovation was to park the vans. At Belzec, Sobibor, and Treblinka, the innovation was to remove engines from vehicles. The use of hydrogen cyanide (Zyklon B) rather than exhaust fumes at Auschwitz was another link in a chain of murderous learning.

If we chart Auschwitz as a place within the historical geography of war and occupation, we apprehend some of the causes of the Holocaust. We quite rightly see Auschwitz as evidence of the totality of the Nazi aspiration to eradicate Jews. It can also help us to see some major preconditions to the realization of that vision: a resource war in eastern Europe, and the destruction of European states.

Auschwitz was built as a site of concentration for slave laborers, one of many such as German power moved east. The main Nazi war aim was the conquest and exploitation of the black earth of Ukraine to secure land and food for Germans in perpetuity. It was this goal that propelled millions of Germans to the east, and brought the homeland of world Jewry under Germany control. This was one precondition of the Holocaust: the colonial war of 1941.

When Germany betrayed its Soviet ally and invaded the USSR, its forces first reached the lands that had just fallen under Soviet control: eastern Poland and the Baltic States, doubly invaded and doubly occupied. This confrontation created the political openings for the mass killing that begin in 1941.

Jews were murdered at extremely high rates, at least 95%, as German power extended beyond the zone of double state destruction eastward into the prewar Soviet Union, and then westward to lands of occupied Poland where the state had already been destroyed.

Auschwitz became a killing site in 1943, after most of the Polish, Baltic, and Soviet Jews under German power were already dead. It was to be the site of death for the Jews still alive in sovereign states throughout Europe. About a million Jews would be gassed to death there, a stupefying figure. Yet most of the Jews living in such places in 1943 would survive the war.

Once the Germans tried to kill Jews beyond the zones of statelessness, they encountered political barriers. In general, the proportion of Jews killed in the Holocaust rose as the sovereignty of their states was compromised. The history of each country is specific, but the general rule holds.

Auschwitz is correctly seen as the symbol of the Nazi aspiration to kill all Jews under German control. Properly located in time and space, rethought historically, Auschwitz can help us understand the sources of that control – and its limits. Rather than abolishing political history, Auschwitz demands it.