The Horror the Constitution of 1787 Protected Wasn’t Just Slavery. It Was the Domestic Slave Trade.

Calvin Schermerhorn teaches history in Arizona State University’s School of Historical, Philosophical, and Religious Studies and is author of the new book The Business of Slavery and the Rise of American Capitalism, 1815-1860 (Yale, 2015). He also authored Money over Mastery, Family over Freedom: Slavery in the Antebellum Upper South (Johns Hopkins, 2011) and co-edited Rambles of a Runaway from Southern Slavery, by Henry Goings (Virginia, 2012). His research focuses on slavery, capitalism, and human trafficking.

●  Sean Wilentz responds to his critics

●  Was the Constitution of 1789 Anti-Slavery or Pro-Slavery? By Ian J. Aebel

●  Why this argument matters so much By Mary Sarah Bilder

One nearly overlooked theme in the current debate over the Constitution and slavery is the extent to which the 1808 Clause and federal powers under the Commerce Clause made the domestic slave trade and economic nationalism contiguous. Proslavery was the default setting in American constitutional law, and Americans’ confidence in the perpetual value of enslaved property was correspondingly strong. Since Sean Wilentz’s valiant defense of the Constitution as an antislavery document, debate concerning slavery and the federal Constitution has rightly focused on the expansion of cotton country and slave populations and the three-fifths clause. But Congress regulated rather than chipped away at the domestic slave market despite its power to constrict or cut that trade, closing a city slave market just once. Abolitionist Henry Stanton contended in 1839 that “the internal slave trade is the great jugular vein of slavery; and if Congress will take the same weapon with which they cut off the foreign trade, and cut this vein, slavery would die of starvation in the southern, and of apoplexy in the northern slave states.” Yet Congress dared not do any such thing. In 1840, U.S. wealth in slaves amounted to $977 million, which today would have an economic power value of $10.8 trillion or 62 percent of 2014 U.S. GDP. 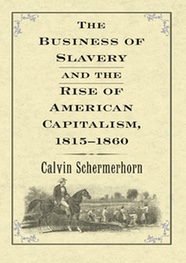 The most dynamic feature of how Constitutional authority made slavery national was the United States slave market. Article 1 Section 9 prohibited Congress from banning the importation of captives into the U.S. until 1808, which was the sole prohibition on policy as opposed to powers. In 1787, delegate James Wilson told his fellow Pennsylvanians that “I consider [the 1808 Clause] as laying the foundation for banishing slavery out of this country.” But his objective was ratification and not gradual abolition on the Pennsylvania model. Other supporters of ratification like James Madison predicted that the curtailment of the Atlantic trade “within that period it will receive a considerable discouragement from the federal Government, and may be totally abolished by a concurrence of the few States which continue the unnatural traffic.” Many Virginians who held that rosy prediction also held bondspersons that were readily saleable in the importing states of South Carolina and Georgia. And the lower South importers of Africans quickly turned to their countrymen for bound workers.

Instead of halting the resulting domestic traffic, Congress regulated it, requiring coastal slave ships to be above a certain tonnage. The domestic ports of Alexandria, Baltimore, and Richmond, among others, became like Whydah or El Mina, notorious slaving ports of West Africa. American merchants cooperating with American slaveholders began embarking African-descended captives below the decks of American ships on a “Second Middle Passage,” as historian Ira Berlin terms it, to the frontiers of cotton and sugar along the Mississippi, the Red, and eventually the Brazos rivers.

Closing the foreign trade conferred a legal monopoly on sales of slaves living in the republic to slaveholders within it. Upper South slaveholders profited from selling bondspersons to their lower South countrymen. And even when foreign shipments of captives were landed in the U.S. illegally, human cargoes were treated as captured property rather than kidnap victims, as the 1841 Amistad case illustrates. It was not until the Lincoln administration that federal authorities hanged violators of the federal ban, and in the meantime U.S.-flagged ships plied the transatlantic slave trade with near-impunity.

The defining characteristic of federal sovereignty in the early United States was authority to control trade at the border. American saltwater slavery operated within a vision of a national economy that contained the slave market. Once imagined in law, Congress tasked customs collectors and federal courts with policing it. Patterned on cargo manifests, most federal slave manifests included the heading, “Negroes, Mulattos, and Persons of Color,” transported on the seas “for the purpose of being sold or disposed of as Slaves, or to be held to service or Labour.” Federal law required masters of vessels to file customs manifest listing names, genders, ages, height, and “whether negro, mulatto, or person of colour,” along with names of consigners and consignees, to be cleared by federal agents at departure and certified by federal agents at arrival in a U.S. port. Surviving manifests furnish some of the most detailed vital records of African Americans before the Civil War. Federal authorities routinely treated African Americans murdered, raped, or who died as a consequence of the trade as perishable goods for whom the federal Constitution offered no protections.

And the interregional slave market interested many non-southerners, including New York bankers and New England shippers, who profited from the forced migration of over 1 million African-descended Americans over seven decades. The Missouri Compromise recognized the regional political center of that interest with a gentlemen’s agreement to ban slavery’s expansion north of Missouri’s southern border. States threw up and took down barriers to the domestic slave trade, but some of the most enthusiastic buyers of African-descended bondspersons were also the most ambivalent. Starting in 1829, Louisiana required certificates of good character to protect against black rebels entering the state. It banned the commercial importation of enslaved people in 1831. Mississippi wrote a prohibition against the domestic slave trade into its 1832 constitution. But demand for bondspersons led to widespread evasions. Louisiana lifted its ban so as to save slaveholders the trouble of evading it, and Mississippi rediscovered its ban in the wake of the 1837 financial panic in a rearguard effort to protect voters sunk in debt over their slave purchases.

After the hard times of the early 1840s, confidence in high slave prices was bolstered by owners’ ability to take bondspersons across state lines. Texas opened to U.S. slavers. Congress closed the slave trade in the District of Columbia in 1850 as part of a compromise that included the Fugitive Slave Act, one consequence of which was to treat African Americans accused of being fugitives from slavery as such until proved otherwise. And the 1857 Dred Scott decision affirmed slaveholders’ property rights in bondspersons no matter where they were within the republic and its territories. In the 1850s the U.S. slave market surged, and by 1860, wealth in U.S. slaves was a little over $3 billion, which has the economic power value today of $12.1 trillion today, or 69 percent of 2014 U.S. GDP.

By 1860, the domestic slave trade was a distinguishing feature of U.S. economic nationalism, and even the Republicans pledged themselves to safeguard it by zealously prosecuting violators of the international trade. Deep South slaveholders’ horror of a Republican administration’s upsetting the political economy of slavery was ill-founded, despite rhetoric to curtail expansion and reverse Dred Scott. But even the 1860 Republican platform said nothing about using the commerce power to disrupt the existing slave market. To the disgust of abolitionists like Frederick Douglass, Abraham Lincoln’s party was more interested in protecting freedom and white opportunity in the North than interfering with slavery in the South. It is only as we mark the 150th anniversary of the Thirteenth Amendment writing chattel slavery out of the Constitution (except for punishment for a crime) that an argument to the contrary makes much sense.