What Does Ben Carson's Popularity Say About GOP Voters?

Ben Carson, an African American neurosurgeon, has been climbing fast in the polls. A Monmouth University survey released on August 31 showed Carson tied with Donald Trump in Iowa at 23%. Ben Carson’s recent surge in popularity suggests a need to reconsider assumptions about white resistance to black political leaders, including Barack Obama. Perhaps the familiar claim that whites’ opposition to Obama has firm roots in racial prejudice has been overworked. While prejudice is a factor, resistance to Obama may be generated, to a considerable degree, by political gamesmanship -- the tendency of partisans to accentuate negative characterizations of opposition candidates in order to win elections and achieve policy goals.

Ben Carson’s warm reception among Republicans reflects what might be called the Sidney Poitier Appeal. In the popular 1967 movie, Guess Who’s Coming to Dinner? Sidney Poitier plays a medical doctor who wants to marry the white daughter of a prominent businessman (played by Spencer Tracy). Poitier’s character, a true gentleman, is admirable in every way. He is an accomplished physician who performed ground-breaking research in medicine. Nevertheless, the girl’s father objects to a black-white marriage involving his daughter. Some movie reviewers complained that Poitier’s movie role seemed unrealistic, because his character was too perfect.  But Director Stanley Kramer and screenwriter William Rose had a reason for loading the dice. They left audiences with no legitimate reason to sympathize with the father. If viewers objected to the marriage, Kramer and Rose wanted them to recognize that prejudice influenced their judgment. 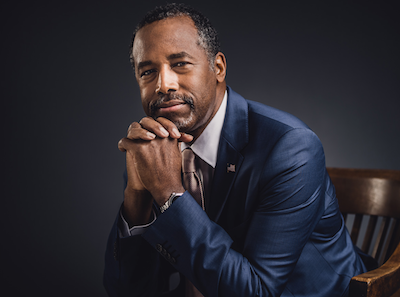 In many respects Ben Carson has enjoyed a Poitier-like appeal with voters. Like Poitier’s character in the movie, Carson is handsome, soft-spoken, intelligent and refined. He does not draw attention to race unless others force him to deal with the subject (much like Poitier’s character). Ben Carson served as Director of Neurosurgery at the Johns Hopkins hospital. He achieved fame through pioneering work separating conjoined twins. In the movie Poitier plays a doctor that has been developing innovative medical initiatives in Africa. CNN and Time identified Ben Carson as one of the nation’s foremost physicians and scientists. In Guess Who’s Coming to Dinner? Poitier is a renowned physician whose work supports the United Nations’ programs in underdeveloped countries.

This is not the first time that Republicans have displayed strong interest in a black candidate for the White House. In 1995, a year before the election in which Bill Clinton ran for a second term, many Republicans wanted to name General Colin Powell as their party’s candidate. In 2012, Herman Cain, a businessman and radio show host, briefly surged in the field of Republican presidential candidates.

Gallup polling over several years reveals notable changes in public attitudes about a black candidacy. Pollsters asked American subjects if they would choose a well-qualified black candidate for president. In 1958 just over a third of the Americans surveyed indicated they would vote for such an individual. That support climbed to around 50% in the early 1950s. It grew to almost 70% in the late 1960s, and it reached 95% in 1999.

In spite of data showing growing national acceptance of a well-qualified black president, resistance to Barack Obama’s leadership has often been expressed in language that hints at racial antipathy. Why doesn’t Obama benefit from the Sidney Poitier Appeal, much like Ben Carson does presently? Obama’s biography is impressive. Rising from a humble background, Obama became a Harvard Law graduate. Law colleagues selected him for their program’s most prestigious student position, president of the Harvard Law Review. Obama became a celebrated author and an inspiring speaker. He is an exemplary husband and father. Americans who do not agree with his policies ought, at least, to accord him a modicum of respect.

Yet in the 2012 election President Obama was the target of numerous damning commentaries, and he fared very poorly in some regions of the country. Opposition in Kentucky, West Virginia, Oklahoma, Arkansas and Alabama was so strong that it appeared to involve more than just disapproval of his policies. Many whites there seemed fundamentally distrustful of a black leader. Mitt Romney was considerably more successful in attracting votes from whites across the country (especially white males). To win, Obama needed strong support from Latinos, African Americans, Asians, single women, and other groups.

At first glance, Obama’s difficulty with white voters seems to reveal the persistence of racial prejudice. Bigotry is certainly an element in the fierce resistance Obama has faced over the course of his presidency. Yet the recent history of American politics suggests other factors, including gamesmanship (the art of employing various tactics to gain psychological advantage), have been significant factors in stimulating opposition to him.

In the modern, media-driven field of presidential campaigning, attacks on character have become standard fare. Partisans work assiduously to portray candidates of the other party in starkly negative terms. These days, patrons of conservative media outlets frequently hear claims about Barack Obama’s supposedly “failed” presidency.  Democrats know how to play this political game. Their strategists effectively portrayed Mitt Romney as a heartless capitalist well before Romney could shape his image.

Republican gamesmanship has been abundantly evident in recent years and months. When Hillary Clinton worked as Secretary of State, partisans on the right did not exert much energy criticizing her. Now that Mrs. Clinton is campaigning for the White House, GOP partisans blast her often as an ineffective and scandal-ridden leader.  Currently, Republican strategists say almost nothing about Bernie Sanders, perhaps hoping that he will emerge as the Democrats’ choice. If that happens, they will hammer Sanders as a radical socialist and claim his policies will destroy American jobs and create a recession. If Sanders, a white man, wins the nomination, he will become a victim of political gamesmanship as much as Barack Obama has been over the past seven years. The demonizing will not be the same as in Obama’s case, and race will lack relevance. Sanders will, nevertheless, serve as a frightful villain in the opposition’s political narrative.

The record of gamesmanship in American presidential politics suggests that Barack Obama could receive more generous treatment from Republican leaders after he leaves the White House. The drum-beat of negative commentary directed at him in current politicking will likely become muted after he steps out of the presidency. Who knows? Perhaps some of Obama’s erstwhile political enemies will treat him like a statesman when he is no longer the Chief Executive.

Currently, Ben Carson’s impressive biography makes him look like a strong candidate in the GOP’s primary competition. In some respects his appeal with Republican voters resembles the attraction of Barack Obama in 2008 when the young Democratic candidate inspired trust and hope. But Carson remains a long shot in the GOP’s primary race. Like Donald Trump and Carly Fiorina, Ben Carson is profiting from lack of association with the Washington Establishment. Pundits are now giving his candidacy detailed attention. In the long run news about Carson’s political inexperience and controversial stands may undermine his campaign. Whatever the outcome, Ben Carson’s recent surge in the polls raises an intriguing question: might white Americans’ opinions about race, including those of white conservatives, be considerably more elastic and open-minded than many political observers think?