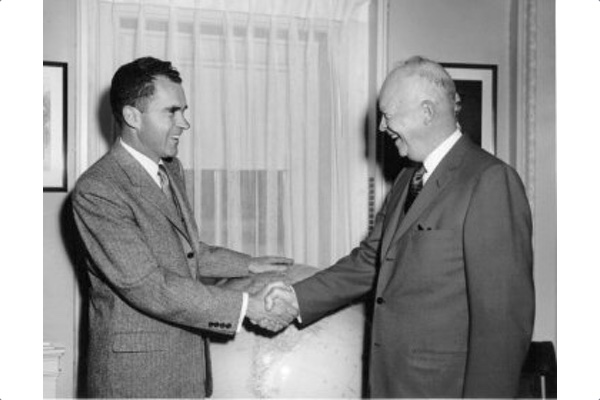 The myth that Dwight Eisenhower and Richard Nixon were at best inattentive to civil rights—and at worst outright racists—did not begin with Eisenhower’s presidency. Such accusations were made against Eisenhower in 1948 when he testified for the Army concerning African-American soldiers. The National Association for the Advancement of Colored People attacked Nixon throughout his congressional career. The first scholarly books on Eisenhower’s civil rights record (such as James Duram’s A Moderate Among Extremists (1981) and three years later, Robert Burk’s The Eisenhower Administration and Black Civil Rights) were uniformly negative. But Stephen Ambrose, in his otherwise admiring Eisenhower biography, cemented in the historical record the idea that Ike’s greatest failure as president dealt with his civil rights policies. Ambrose went so far as to invent a fable that Eisenhower told a racist joke at a legislative leaders meeting. Later, in the Pulitzer Prize-winning book Parting the Waters,Taylor Branch relied on Ambrose’s account and embellished that imaginary incident into an embarrassing and despicable habit of Ike’s. 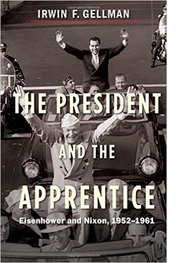 Michael Mayer has challenged this allegation against Eisenhower since the 1980s with a string of scholarly articles, culminating in his massive 2009 book The Eisenhower Years. David Nichols furthered this effort with the publication of A Matter of Justice (2007), in which he clearly demonstrates that Eisenhower actively pursued a positive civil rights program. In fact, from Abraham Lincoln’s administration until Lyndon Johnson’s, Eisenhower was the most assertive president the United States had on civil rights. Timothy Thurber’s Republicans and Race (2013) significantly helped to reverse the myth of Eisenhower’s lack of interest in civil rights. My own recent book, The President and the Apprentice, shows that Eisenhower took major measures to advance civil rights and that Nixon was the administration’s chief spokesman for the cause.

Despite these major efforts by Mayer, Nichols and Thurber to alter the conventional wisdom, a strange inertia still dominates. Many textbooks and historians perpetuate the myth of Eisenhower and Nixon’s racism and push it further into the outrageous.

Emmanuel Gerard and Bruce Kuklick’s Death in the Congo was published earlier this year. In it, the authors wrote: “Eisenhower had little sense of the ambitions of people of color anywhere. A genteel disdain also pervaded his civil rights politics at home. Richard Nixon led the Republicans in his sensitivity to Africa and its connection to domestic issues, although Nixon also regularly spoke about the ignorant natives overseas and, at home, the Colored, or the nigs” (p.56). These allegations are not substantiated by any source note. They cannot be, because nothing in this passage is historically accurate.

Two scholars at leading universities produced this book; it was presumably peer-reviewed by qualified readers; and it was published by Harvard University Press. In spite of these impeccable credentials, it still presents erroneous beliefs as unquestioned fact.

Eisenhower was deeply concerned with civil rights throughout his presidency. Shortly after he entered the White House, he desegregated the capital and ended segregation in the armed forces, implementing Harry Truman’s executive order. Ike ordered Army troops to Little Rock, Arkansas, to enforce school desegregation in 1957, the same year his administration steered through Congress the first federal civil rights legislation since Reconstruction. The five men he appointed to the Supreme Court were all strong advocates of racial equality. He certainly did not regard civil rights with “genteel disdain” and did not refer to African Americans in derogatory terms.

As for Nixon, he did not “regularly” speak “about the ignorant natives overseas.” In an administration with many advocates of desegregation, he was the most active and vocal, arguing that if the United States did not improve on racial equality, it could not credibly preach democracy to developing nations. As for the allegation that Nixon routinely used the terms “nigs” or “niggers,” I have examined virtually every document related to the Nixon vice presidency at his presidential library in Yorba Linda, California. I challenge anyone, including the two authors, Harvard University Press, and its outside readers, to provide any proof that Nixon used those terms during his vice presidency.

If this were an isolated case, it would not be worth protesting, but it is not isolated. Gerard and Kuklick felt comfortable making such an assertion without attribution; Harvard University Press’s outside readers apparently did not question this falsehood; and the press’s internal editors let it stand because it reflects the conventional wisdom.

When “everybody knows” that Eisenhower and Nixon did not care about civil rights, there is no need to think any further. But if we are satisfied with what “everybody knows,” there is no reason to do any historical research. Too many historians refuse to do the necessary research because they have forgotten that complacency is the death of understanding. If we do not constantly check our conventional wisdom against the verifiable facts, we will never learn anything.