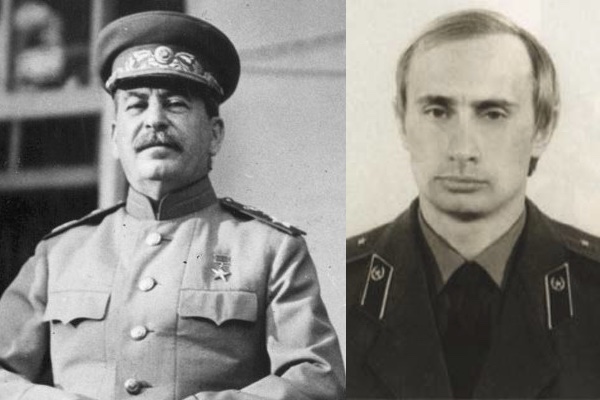 One Night in Winter (2014) is a historical novel set in the Soviet Union of 1945. Its author is Englishman Simon Sebag Montefiore, who has also written two excellent non-fiction books on Stalin, as well as other historical and fictional works. After finishing this recent novel, I began thinking about similarities and differences between Stalinist Russia in 1945 and Putin’s Russia in 2015 and how U.S. policies should react to Russia.

But first some words about the book. Among the useful ancillaries provided with the 458-page novel is a supplement called “History: Facts and Fiction,” where Montefiore tells us which characters are real and which are fictional and that his aim “is to make the atmosphere as authentic” as he can. “Some of the Soviet leaders, generals and secret policemen are based on real people and the details of their personalities, sometimes even their words, are accurate.” His depiction of Stalin is, for example, completely in keeping with the facts known about the Soviet leader, facts that Montefiore has demonstrated a thorough knowledge of in his two biographical works on Stalin.

At the beginning of the book the author also provides a list of the novel’s main families (chiefly fictional) and political, military, and secret police leaders (overwhelmingly real-life figures like Stalin and Lavrentia Beria, who headed the NKVD, forerunner of the KGB). Two actual events provided the basis for the fictional plot that Montefiore so skillfully weaves around all these characters.

The first was the shooting and suicide of two Moscow teen lovers in 1943. The NKVD discovered the young man’s notebook in which he pretended to appoint a mock government including two teenage sons of Anastas Mikoyan, one of Stalin’s chief officials. The sons were both “arrested on suspicion of being members of an anti-Soviet conspiracy,” and sent to the infamous and dreaded NKVD prison, the Lubianka.

The second event was the romance between a young Russian woman and a British Embassy officer who translated for Churchill at his meetings with Stalin. When she later attempted to leave Russia to join him abroad, she was poisoned on a train, returned to Moscow, arrested, and sent to the Gulags.

Montefiore takes the liberty of linking these two events together and changing some of their details—moving the shooting, for example, to 1945 and making the foreign officer an American—but his novel remains true to the spirit of life among the Soviet elite in late WWII Russia. He is especially good at capturing the atmosphere of a Moscow school attended by many of the elite children, of the Lubianka prison and of Moscow’s streets, homes, and offices in 1945.

Beside relying on his own Stalin: The Court of the Red Tsar, where he provides details on the Mikoyan sons and other children of leaders, the author also acknowledges his debt to historian Orlando Figes’ The Whispers: Private Life in Stalin’s Russia. In this historical work, Figes mentions a school director and some kind teachers that bear some similarities to characters in One Night in Winter, one of whom teaches the poetry of Pushkin.

Montefiore’s novel is a real page-turner full of intrigue and insights about Stalin and the Soviet elite and their children; but it is also, says the author, “about private life–above all, love.” Moreover, students of history can also learn much about Soviet schooling, Stalin’s relations with all his political and military subordinates, and about their attitudes toward him. It might seem incredible to most Western readers that Montefiore’s elite parents, who include some top political officials, could fail to protest the arrest and incarceration of their children, but the reality was not far from the fiction presented here. Not only did Mikoyan tolerate the arrest of his sons, but so too did Foreign Minister Molotov accept that of his wife, Polina, whom Stalin distrusted partly because of her Jewish origins.

Many of the novel’s adults seem to accept Stalin’s view that “You can’t make an omelette without breaking eggs,” that “toughness is a Bolshevik virtue,” and that mistakes are sometimes made, but that Stalin was still a great wartime leader.

This belief brings us back to the popularity in Russia of Stalin (then and today), as well as of President Putin. When we Westerners look at all of Stalin’s crimes, some portrayed in Montefiore’s novel, we ask ourselves, “How could Russians support such a tyrant?” How could the arrests, murders, and mass incarceration of millions of innocent people be justified or Stalin’s tolerance and promotion of such evil individuals as the rapist Beria?

Today, like Stalin, Putin is also overwhelmingly supported by the Russian people. But he is no Stalin, and the Russia he rules over is only about three-fourths the size of the former Soviet Union and no longer includes territories like today’s independent Ukraine. And for all his faults and the vilification of him in Western media, the “crimes” of Putin pale in comparison to Stalin’s. And yet the admiration of Russians for both of these leaders tell us something important about the Russian public, seventy years ago and still today.

Look at two recent Russian polls, one on Stalin and one on Putin, both conducted by the respected and independent Levada Center. The first occurred in March 2015 and asked those polled, “How would you react if, for the 70th Anniversary of Victory Day [May 9, celebrating the defeat of Nazi Germany], a monument to Stalin were erected?” Only 25 percent responded negatively, more responded positively, and many were indifferent. When asked, “What is your attitude toward Stalin?” more respondents expressed “respect” or “sympathy” than hostility, disgust, or other negative feelings. When asked whether they agreed or disagreed that “Stalin should be considered a state criminal,” only 25 percent agreed and more than 50 percent disagreed.

A Moscow Times summary of the poll concluded that Stalin’s popularity had increased since 2000, partly due to Putin’s efforts. The paper also quoted the head of Memorial, an NGO dedicated to the rehabilitation of Stalin’s innocent victims: “It is a very alarming sign. It is telling not only in terms of attitudes to Stalin but in terms of the relationship between the individual and the state. Stalin is perceived as a symbol of a powerful and mighty nation, and the fact that he and all his policies were anti-human remains a secondary consideration.”

Although a substantial minority of Russians still find Stalin’s terror appalling and inexcusable—and similarities between Stalin’s years in power and those of Putin should not be exaggerated (as they sometimes are in the West)—nevertheless the increasing popularity of Stalin suggests some links with Russia’s current president. The Levada Center’s polling on Putin indicates that his approval ratings between January and July 2015 have ranged between 85 and 89 percent. Like many Russians, Putin views Stalin less harshly than do most Westerners.

At a November 2014 meeting with history teachers, Putin told them “The cruelty of the leadership likely played a certain role [in winning WWII] as well. We could, of course, argue about this and give political assessments. It’s just hard to say whether we could have won the war if the leaders had not been so cruel, if they were more like those in Nicholas II’s time [1894-1917]. It’s very hard to say. And what would the consequences have been if we’d lost? The consequences would have been simply catastrophic.” This sounds very much like one of Stalin’s favorite sayings mentioned above, “You can’t make an omelette without breaking eggs.”

At one point in One Night in Winter we read of Stalin’s thinking shortly after Nazi Germany had been defeated: “Stalin lay back on the divan, inhaled on the cigarette and closed his eyes for a second. The country was devastated, surrounded by enemies, infiltrated by agents, agents, threatened by America. Discipline was essential.”

Former KGB officer Vladimir Putin apparently sometimes has similar thoughts—and, most importantly, so do many contemporary Russians. In Mr. Putin: Operative in the Kremlin (expanded ed., 2015), by Fiona Hill and Clifford Gaddy, the authors write: “The first key to Vladimir Putin’s personality is his view of himself as a man of the state, his identity as a statist.” They also describe his political “system”: “Loyalty is ensured through blackmail. Corrupt, even illegal, activity will be kept secret as long as the individual continues to play the game. People are rewarded with money and other perks for working for and within the system and for performing well in the tasks that Mr. Putin has set out for them.” And if anyone betrays Putin, he is not reluctant to disgrace him.

The head of Memorial may fear that too many Russians place the strength of the state above individual rights, but Putin also does. And like Stalin, he also distrusts the United States and associates strengthening his own power with the welfare of the country.

In dealing with Russia today—or the Soviet Union in the past—too often we have just demonized their leaders. But given the popularity of a Stalin or Putin in their own country, we need to recognize that strong, forceful rulers are admired more there than are those who would insist on individual rights. A 2013 Levada Center poll indicated that Lenin and Stalin were still viewed much more favorably than were the more democratic Gorbachev and Yeltsin. Too often in the past, including in Iraq, American policymakers have ignored political cultures and public opinion that is different from our own. Any effective U.S. foreign policy must not just vilify leaders, whether Saddam Hussein or Putin, but recognize and try to understand why so many foreign citizens think differently than we do.

The U.S. Ukrainian policy, for example, should not merely ignore the results of Russia’s backing of its president. Two June 2015 Levada Center polls indicate how strong it is. The first poll indicates an 87 percent Russian approval of the annexation of Crimea and a strong backing of Russia’s Ukrainian policy: A majority of respondents desire that eastern Ukraine (presently a conflict zone between Ukrainian government forces and separatists backed by Russia) either become independent or part of Russia. The second poll reflects the extent to which Russians share their president’s distrust of the USA: 86 percent of those polled believe that “the USA uses the current difficulties in Russia to turn it into a secondary power.” One of Russia’s most astute observers, Dmitri Simes, believes that Western sanctions against Russia have led to the following result: “Many have rallied around the flag and embraced Putin as a ‘father protector’ defending the country against foreign onslaught.”

One Night in Winter helps us to better understand Russia seventy years ago, and how Russians could view Stalin so favorably, despite “the cruelty of the leadership” (to use Putin’s term). Western policymakers need to learn a similar lesson regarding Putin’s Russia today.