How Watergate’s E. Howard Hunt Made Me a Better Historian

by David A. Horowitz

David A. Horowitz teaches U.S. political and cultural history at Portland State University. He is the author of America’s Political Class under Fire: The Twentieth Century’s Great Culture War (2003), The People’s Voice: A Populist Cultural History of Modern America (2008), and a recently released personal, political, and professional memoir, Getting There: An American Cultural Odyssey. 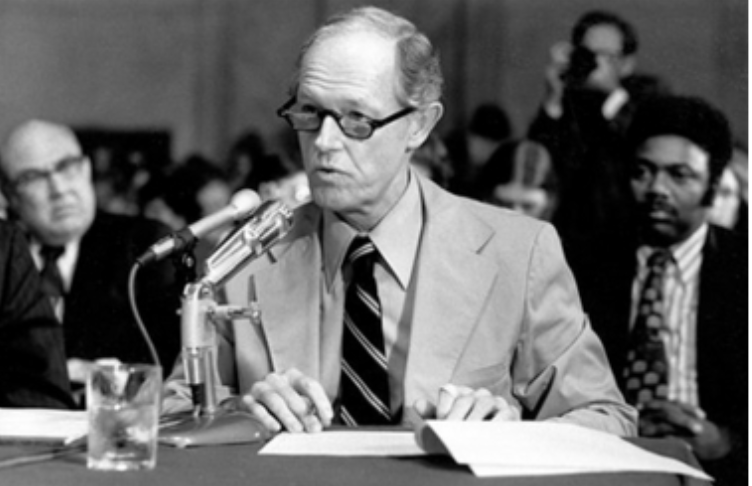 Forty years ago this September, I sat in the visitor’s lounge of the federal correctional facility at Eglin Air Force Base in the Florida Panhandle with convicted Watergate conspirator E. Howard Hunt. A twenty-one year CIA veteran and political action officer during agency operations in Guatemala (1954) and Cuba’s Bay of Pigs (1961), Hunt had teamed up with former FBI agent Gordon Liddy to direct President Richard Nixon’s infamous White House “Plumbers.” The team’s illegal break-ins and wiretaps had culminated in the forced entry at the headquarters of the Democratic National Committee at Washington, D.C.’s Watergate complex. Hunt now was serving a thirty-month to eight-year prison sentence.

As a young history instructor at Oregon’s Portland State University, I had fixated on the Watergate saga. My weekly column for the student newspaper even had predicted Nixon’s demise as early as October 1973. Intrigued by the convening of a Select Senate Committee to investigate intelligence agency abuses in 1975, I arranged to spend my first sabbatical leave compiling reports on the hearings for two small-circulation Oregon periodicals.

Through a Portland contact, I found myself lunching at the National Press Club in early July with David Beckwith, the lead correspondent of Time magazine’s Washington bureau. When I spied a blown-up photo of E. Howard Hunt on the dining room wall, I remarked that it certainly would be interesting to talk to him.

Pulling a letter out of his pocket, Beckwith said he had just heard from Hunt.

Convinced that Time had run a sympathetic profile of him during his early period of incarceration, Hunt now sought additional coverage to facilitate an appearance before the Senate Committee and the chance of early parole. Yet Beckwith had little interest in sustaining the relationship. As a historian interested in the CIA, he proposed, I should go to see him.

Once Hunt received assurances that Watergate issues were off the table, a requirement mandated by federal Judge John Sirica, he approved the visit.

My first question concerned speculation that the CIA sometimes acted as a “rogue elephant.” Hunt dissented. He always believed that techniques such as covert entry, wiretapping, and the falsification of documents, standard procedures in overseas missions, he said, were in the national interest as long as they received approval from higher authorities. He placed foreign assassination attempts in the same category. Hunt attributed recent disclosures of CIA domestic spying to leaks from operatives who never received promised promotions or transfers during tough duty assignments in Vietnam. He claimed the war had vitiated the agency by asking it to do too much in a conflict the nation was unprepared to win. Nevertheless, he warned that publicity about CIA abuses would result in a loss of American prestige, economic deprivations on a scale not presently imaginable, and reduction of the United States “to a dismembered octopus that flaps feebly now and then.”

As visiting hours expired, Hunt said he had enjoyed our conversation and said he was free the next day. The following morning, our conversation returned to domestic spying in the late Sixties, which Hunt defended because of widespread radical violence and pressure from President Lyndon Johnson. When I noted that as a participant in campus protests, I saw little threat to social order, he replied he sometimes felt that way about Watergate targets.

Nevertheless, in either case, he added, it was not his judgment or mine that counted.

Hunt was a reflective man with a sense of history who enjoyed political dialogue, even with someone whose politics ran counter to his own. My profile presented him as an unreconstructed conservative who believed the West had been enervated by war, pleasure seeking, and pervasive consumerism. Yet I saw Hunt as perceptive enough to realize events had overtaken him. Despite his animated demeanor, I noted, much of his talk conveyed a sense of loss.

As our second session extended into the afternoon, I asked if prison had changed his mind about anything. Yes, he answered, two things. First, he had learned there was little harm in marijuana, which mellowed out the institution’s population and kept the peace. Second, he did not believe people should do time because of a financial dispute with the Internal Revenue Service. As I ran out of questions late in the day, Hunt assumed a decidedly fatherly tone. Respectful of my Jewish upbringing and intellectual pursuits, he promised a “real” interview upon his release.

“Sirica’s my rabbi,” he explained as we parted.

As I typed up my notes back in Alexandria, Virginia, I realized that my best shot at conveying the essence of Hunt’s worldview was to let the subject speak for himself. This involved something of a transformation for a “radical” historian who had joined the chorus of critics demonizing the Nixon White House’s end run around American democracy. Yet Hunt taught me that even one’s opponents could be capable of honesty, humility, and intellectual vigor. I began to appreciate that historians served best not as parties to particular disputes, but as thoughtful and even empathetic observers who explained the terms of debate. In the end, I would come to realize, the craft of history offered the chance to develop general insights and broad perspectives on the paradoxes and ironic contradictions of human culture.

The lessons learned from my encounter with Howard Hunt would penetrate my subsequent scholarship on the 1920s Ku Klux Klan, New Deal opponents, pre-Pearl Harbor noninterventionists, post-World War II anticommunists, 1960s racial segregationists, and latter-day critics of the Washington political class. At the same time, Hunt’s unreconstructed conservatism conveyed the warning that personal and political alienation, however compelling a theme in literature and the creative arts, made a poor start for effective politics. Without a degree of respect for those outside one’s immediate reference group, I would come to realize, professed agents of change, whether left or right, faced imminent marginalization. Mobilizing the American people required the ability to sustain an optimistic faith in their capacities.