George Whitefield, Hero of the Revolution?

Jessica M. Parr is a historian specializing in race and religion in the early modern British Atlantic world and is the author of Inventing George Whitefield: Race, Revivalism, and the Making of a Religious Icon published earlier this year by University Press of Mississippi. She currently teaches at the University of New Hampshire at Manchester.

In 1781, as the American Revolution raged, a Connecticut magazine reported that a spectral George Whitefield (1714-1770) had appeared over a regiment of British troops, including Benedict Arnold. So frightened were these British regulars, the magazine claimed, that they burned their British finery. Those familiar with the consumer politics of the Revolutionary period will recognize the political statement implicit in the burning of British goods. With refinement, British clothing, textiles, and other goods had become attractive to well-heeled colonists, who emulated the latest London fashions. As T.H. Breen and others have noted, the wearing of British fashions became problematic during the Revolution. Textiles and other factories began to crop up in the northeast, the start of an American industry. 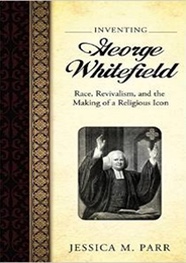 In this context, a ghostly Whitefield literally scaring the pants off of British solders has two important implications. The first is related to the consumer politics described above. The Anglican evangelical missionary had been well-known in life for criticizing material excess, from his classmates at Pembroke College, Oxford, to English planters in the southern British American colonies. The “vision” implied a lack of piety and virtue on the part of the terrified soldiers. The second was in claiming Whitefield as a defender of the American cause.

Benedict Anderson has described nations as “imagined communities.” For evangelical Americans, that meant the construction of a national religious narrative from a very pluralistic colonial past. As a figure who advocated an un-walled church, and who tended to ignore denominational and geographic lines as inconvenient obstacles to the spread of his religious message, Whitefield was an obvious choice as an icon, or rallying point for American evangelicals, despite the fact that he remained a very international figure. From Whitefield’s death onward, American evangelicals drew Whitefield into a developing American religious culture.

Phillis Wheatley was perhaps the first to identify Whitefield as a “savior” of Americans, in her elegiac poem, following his death in 1770:

The fruit thereof was charity and love.

Towards America – couldst thou do more

Than leave thy native home, the British shore,

The 1772 publication of a memoir, by John Gillies also helped to underscore Whitefield’s connection with American religious culture. The Gillies memoir emphasized Whitefield’s extensive missionary travels in the British American colonies. Although the American Revolution was far from a forgone conclusion by 1772, there was already considerable precedent to considering a colonial culture that was separate from that back in the United Kingdom. Whitefield had been dead for five years by the time shots rang out at Lexington Green, but he was incorporated almost seamlessly into a religious narrative. Even Benedict Arnold, who was later to be haunted by a spectral Whitefield, visited Whitefield’s tomb with a contingent of Continental soldiers, who took souvenirs – talismans if you will – from the missionary’s coffin.

As independence was declared, and the new country sought to frame its new political and social identity, there was even more of a need to construct an American religious identity. Frank Lambert described this process as “a revolution of religion.” Part of this process was a desire on the part of evangelicals to tie piety into the American cause, making it a “holy nation.” Because Whitefield frequently discussed “tyranny” and “religious freedom” (although in a British context) in his writings and sermons, resonated with those who sought an American religious icon.

Whitefield’s tomb was the source of regular visits by pilgrims. In this sense, Whitefield’s remains were not unlike the bones of Revolutionary War soldiers who, as Matthew Dennis notes, were venerated, and cultivated “memory, nationalism, patriotism, and the agenda of the memorializers.” For Whitefield’s supporters among the American religious community, his memory took on a heroic property, which made independence a moral victory and tied him into the national narrative, Americanizing him. Whitefield remained a transnational icon, drawing evangelical pilgrims from around the world, but his centrality to American evangelical culture was lasting.