Victoria W. Wolcott is the author of Race, Riots and Roller Coasters: The Struggle Over Segregated Recreation in America (University of Pennsylvania Press, 2014).

The disproportionate policing of a group of black youths in McKinney, Texas has deep roots in the history of race and recreation in America. Swimming pools and beaches were among the most segregated and fought over public spaces throughout the country, in the North and the South. White stereotypes of blacks as diseased and sexually threatening undergirded this segregation. City leaders justifying segregation also pointed to fears of fighting breaking out if whites and blacks mingled. Racial separation for them equaled racial peace. White teenagers strengthened this belief by attacking black swimmers after activists or city officials opened public pools to blacks. 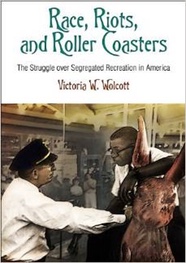 “When pools have been opened on a nonsegregated basis,” noted one legal scholar in 1954, “either under legal compulsion or by voluntary action, disturbances have resulted more frequently than in any other instances of desegregation.” Whites threw nails at the bottom of pools, poured bleach on black bathers, or simply beat them up. In the late 1940s there were major swimming pool riots in St. Louis, Baltimore, Washington, D.C., and Los Angeles.

And despite civil rights statutes in many states the law did not come to African Americans’ aid. In Charlotte, North Carolina, for example, the chairman of the Charlotte Park and Recreation Commission in 1960 admitted that “all people have a right under law to use all public facilitates including swimming pools.” But he went on to point out that “of all public facilities, swimming pools put the tolerance of the white people to the test.” His conclusion was predictable: “Public order is more important than rights of Negroes to use public facilities and any admission of Negroes must be within the bounds of the willingness of white people to observe order or the ability of police to enforce it.” In practice black swimmers were not admitted to pools if the managers felt “disorder will result.” Disorder and order defined accessibility, not the law.

Only after decades of persistent activism did these barriers begin to fall. But instead of whites and blacks swimming and playing together recreational facilities in American cities have been defunded and apartheid continues to mark the recreational landscape. By the 1970s the virulent racism so common earlier in the century had been replaced by a colorblind discourse suggesting that choices about where to live, work, and play were individual decisions separate from the legacy of racism. But there are moments when one hears the direct echo of those earlier struggles. In 2009, for example, the owner of a private swim club in Philadelphia excluded black children attending a Philadelphia day care center, saying they would change the “complexion” of the club. And now in a wealthy subdivision outside of Dallas police target black teenagers and some in the surrounding community make it clear they – the black children – are not welcome.

The McKinney incident occurred at Craig Ranch, a development in the affluent Dallas suburb. The homeowner association there limited attendance at their pool to residents and two guests. The appearance of a group of African American teenagers, who were attending a birthday party, emboldened at least one resident to call the police. Like the gated community in Sanford, Florida, where Travon Martin was shot, Craig Ranch is not a fully public space. The increase of gated communities and homeowners associations, what the political scientist Evan McKenzie calls “privatopia,” also led to the privatization of recreation. In the mid-1960s the Federal Housing Administration (FHA) openly discouraged public ownership of recreational facilities. Instead, they promoted private homeowner associations in planned developments with private pools and tennis courts.

It is not a coincidence that the rise of homeowners associations and gated communities coincided with the victories of the civil rights revolution. After the 1964 Civil Rights Act desegregated public accommodations municipalities followed different strategies intended to keep the racial peace through maintaining segregation. Some simply filled their pools in, leaving more affluent residents the option of putting in backyard pools. Public pools also created membership clubs and began to charge fees, which acted as a barrier to filter out those pool managers felt were “unfit.” And many cities defunded their recreational facilities, leaving all urban dwellers with little access to pools.

The racial stereotypes that justified swimming segregation, that young blacks were inherently diseased and dangerous, are not often openly expressed today. However, we still see their impact on our urban and suburban landscapes. Because through much of the twentieth century recreational facilities promoted themselves as “safe” and “clean” by excluding African Americans, when integration came whites devalued those spaces and fled to private pools and tennis clubs. In the past when white neighbors perceived a threat from young blacks they called on their teenage sons to attack the invaders and maintain segregation. Today they call the cops.