The Conservatives in Japan Who Are Refusing to Acknowledge the Crimes of World War II Think They’re Helping Their Country. They Are Sabotaging It.

Joyman Lee is an assistant professor of Chinese history at Pacific Lutheran University. 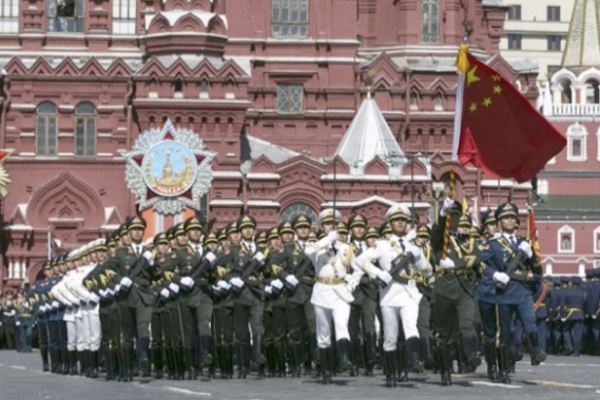 On May 9, 2015, Chinese president Xi Jinping was the chief foreign guest at the Victory Day Parade in Red Square, Moscow, which commemorated the seventieth anniversary of the end of World War Two in Europe. Units from the People’s Liberation Army were joining the parade for the first time, an honor usually reserved for ex-Soviet republics. As in the 1980 Summer Olympics, Western nations and Japan were boycotting the event to protest the Russian annexation of Crimea. Just over a week earlier on April 29, prime minister Abe Shinzō became the first Japanese leader to address the U.S. Congress. He acknowledged the suffering that Japan brought upon other Asian countries but chose his words carefully, and his message fell short of the “eternal condolences” that he claimed to offer.

Japan’s issues with history are not new to observers of East Asia. Since the 1980s, controversies such as textbook revisions, visits by senior politicians to the Yasukuni Shrine, and disputes over the number of victims in the Nanjing Massacre have rocked relations between Japan and other Asian countries, especially China and Korea. While the Chinese tend to speak with one voice on these issues, in Japan war memory is highly divisive and politicized.

As the historian Franziska Seraphim explains, much of this has to do with the Japanese state’s relegation of the question of war memory to the public. Although over two thirds of the Japanese military were tied down in China between 1937 and 1945, there is little consensus among the public as to whether the war in China was even a part of World War Two. The use of the term “Pacific War”– promoted partly by the American occupation authorities – has helped to obscure the war with China from view, and perpetuate a narrative in which Japan, not China, was the chief victim. Without a clear narrative to structure their personal experiences, the Japanese people see themselves as victims both of their military and government, and of overwhelming American force culminating in the atomic bombing of Hiroshima and Nagasaki.

Although no third country actively supports Japan’s position, China has not been articulate in its push for a convincing Japanese apology. On the issue of the Nanjing Massacre, the most effective crusader for the Chinese cause has not been the Chinese government or any Chinese organization but the Chinese-American writer Iris Chang, whose book The Rape of Nanking, provoked numerous death threats and the author’s eventual suicide. Periodically the Chinese government allows nationalist anger to come to the fore by permitting large-scale anti-Japanese protests and boycotts, but these protests are usually very brief out of fear that public anger will spill onto domestic issues.

The Cold War stands among the central reasons as to why Japan has not been compelled to address the war issue with more conviction. Whereas the political goal of European integration has helped to move forward Germany’s reconciliation with its European neighbors, no similar motive exists for Japan. The U.S.-Japan alliance and America’s reluctance to be directly involved in disputes over war memory further eliminates pressure “from above” for Japan to placate its Asian neighbors.

Yet, focusing solely on the American side of the Bamboo Curtain leads one to miss the full picture, as China’s emphasis on the sanctity of the postwar settlement holds considerable appeal to another global power, Russia. Beginning with the Russo-Japanese War (1904-05), Japan and Russia have had a history of bitter conflicts marked by imperial Japan’s attempt to annex parts of Siberia during the Russian Civil War (1918-22), the Nomonhan Incident/Battle of Khalkhin Gol (1938), and the Soviet-Japanese War (1945). In the last conflict Soviet forces crushed the Kwantung Army in Manchuria and detached southern Sakhalin and the Kuril islands from Japan. Survivors’ testimonies point to the targeted killings of Japanese soldiers and civilians by Soviet troops. Between 500,000 and 750,000 Japanese were held in Soviet prisoner-of-war camps, of whom 10 percent perished under harsh conditions.

With its self-perception as a “victim” of World War Two and an idiosyncratic view of the legality of the Soviet occupation, Japan has not come to terms with the loss of the Kuril Islands. To this day a slogan hangs outside the government offices of the northernmost Japanese prefecture of Hokkaidō calling for the return of the “Northern Territories.”

China also has its own history of conflicts with the USSR culminating in the 1969 border war. The issues facing Russia’s far eastern region around Vladivostok, such as rapid demographic decline, general economic malaise, and perceived influx of Chinese immigrants, also have the potential of destabilizing the two countries’ relations. Yet, in spite of the Qing dynasty’s considerable territorial losses to Russia, Beijing respects the emotional value that Russia attaches to territory, which is linked to Russia’s own history of state formation as an empire without clearly-defined borders. Russian anxieties are the most acute in the Far East, and in a speech in 2000 Putin questioned whether the region will remain Russian in the future. In response, Chinese migration to the region has been limited, which contrasts sharply with Japan’s irredentism over the Kurils.

Although the Chatham House policy analyst Bobo Lo has described Russo-Chinese links as an “axis of convenience,” the legacy of World War Two provides China and Russia with a vocabulary to articulate their common interests. When Japanese conservatives brush aside China’s insistence that the post-World War Two international order needs to be upheld as victors’ justice, they simply have not considered Russia’s position. Put simply, Japan’s rejection of the postwar settlement, including the question of war responsibility and the victors’ right to preserve the territorial status quo, makes it very difficult for Japan and Russia to come to a peace treaty, which will be necessary for improved relations between the two countries.

Held in Beijing shortly before the Victory Day Parade, the Lanting foreign policy forum organized by China’s foreign ministry focused on the need to uphold the postwar order. In doing so, it highlights the centrality of World War Two in China and Russia’s common platform, which is striking as the bulk of the USSR’s war was in Europe and not Asia. Yet, Japanese conservatives have simply not understood that Japan’s victimization narrative holds very little currency internationally, and that questions of victims’ redress and international relations are intricately connected. By precluding the possibility of redress based on goodwill, Japan has inadvertently forced China to strengthen its hand politically and strategically by reinvigorating Cold War alliances in East Asia.