Timothy Walch is a member of the Iowa Civil War Sesquicentennial Commission and a frequent contributor to “Iowa Heritage Illustrated,” the quarterly magazine of the State Historical Society of Iowa. He can be reached at Twalch47@gmail.com 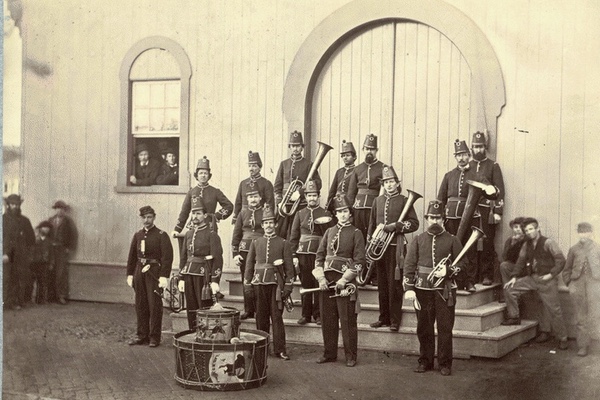 For four years the nation has been commemorating the 150th anniversary of the Civil War. We have recalled the battles and the bravery as well as history and the heroism of hundreds of thousands of Americans who gave their all to preserve the Union.

But in the remembrance of campaigns won and lives lost, we should not forget the importance of music. Many of you just read that sentence a second time. Music? Yes, we should commemorate the central importance of music in the legacy of the Civil War. We owe a lot to the young men who wielded bugles, fifes and drums, as well to those who fired weapons and charged the ramparts.

For most of us, Civil War music consists of a few patriotic songs. “Battle Hymn of the Republic,” and “Dixie” immediately come to mind. But Civil War music was more than these old chestnuts. In fact, music was an integral part of the war from recruitment to battle, to bereavement, and finally to homecoming. Music woke the troops at dawn and sent them to bed at night. More important, music stirred patriotic spirits, directed troops in battle, buried the dead, and celebrated victory.

The most elemental form of Civil War music was heard on the field of battle. The sound of fife, drum, and bugle gave instructions to the troops to advance or retreat among other actions. Through the smoke and confusion, these sounds provided direction and focus to the action at hand. Music also motivated men in the midst of battle. At the Battle of Gettysburg, for example, George Pickett and his men made their now infamous charge to the sounds of “Bonnie Blue Flag.” Waiting for them on Seminary Ridge, were Union troops listening to “The Star Spangled Banner.”

Beyond military operations, music also was an important part of life in camp and at home. The musicians within a regiment or brigade, for example, performed in parades, at concerts, and at other patriotic events. It is believed that there were more than 400 musical bands in the Union army and another 125 bands among the Confederate forces.

As the outcome of the war seemed assured, there were more songs about the impending Union victory. One of those songs, “Sherman’s March to the Sea,” was written as a poem by Samuel H.M. Byers of the Fifth Iowa Infantry. Byers had been a prisoner in Confederate camps for 16 months when he wrote the poem. The words were put to music by another prisoner and the song was smuggled North where it became a huge hit with both families and the troops. It remained popular long after the war and was played repeatedly for General William T. Sherman who, it is said, came to dread hearing it over and over again.

Although music might seem ephemeral to the outcome of the war, it would be wrong to dismiss its importance to both the North and the South. “The war catapulted music to a new level of importance,” stresses Christian McWhorter in his book, Battle Hymns: The Power and Popularity of Music in the Civil War, “More than mere entertainment, it provided a valuable way for Americans to express their thoughts and feelings about the conflict.”

So as we close of our commemoration of the war this month, let’s remember the musicians who did so much to add sound to our memories of a conflict that nearly destroyed our nation. If you listen closely, you can hear their contributions echoing across 150 years.