This Is What Bipartisanship Looks Like – In Case You’ve Forgotten 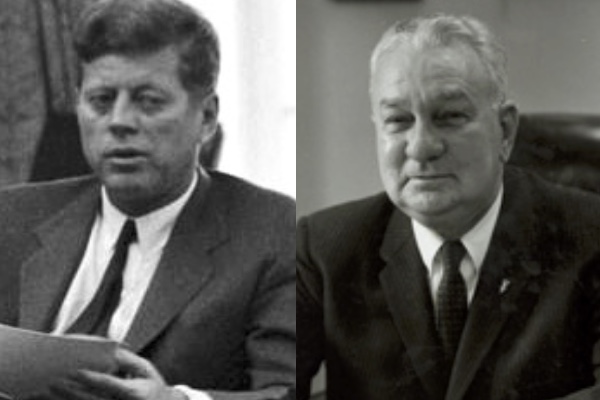 Bitter partisanship has always been commonplace in American politics. It is, nonetheless, notable that there are no signs today of across the aisle collaboration or civility, not to mention friendship, between national political leaders. President Obama once remarked that he liked House Speaker John Boehner, but the facial expressions and body language when the two men meet suggest something well short of mutual warmth. The camaraderie between President Reagan and Speaker Tip O’Neill apparently has no parallel in today’s Washington.

In the early 1960s, President Kennedy worked amicably and productively with GOP Senate Minority Leader Everett Dirksen and his reluctance to campaign for Dirksen’s reelection opponent in 1962 angered Democratic leaders in Illinois. House Minority Leader Charles Halleck was a different story. A self-described “100 percent Republican … gut fighter,” Halleck had been an intense partisan since the 1930s. A committed isolationist, he had voted against Lend Lease and the Draft, and quickly acquired a reputation for party loyalty and tough infighting. Halleck emerged as one of the most outspoken critics of JFK, especially on Cuba.

On October 22, 1962, Halleck and other congressional leaders were summoned to Washington from all across the country; some were flown to the Capital in military aircraft since Congress was not in session. The leaders met with the president just hours before he was to address the nation, and were stunned to learn that Soviet nuclear missiles had been photographed in Cuba. Halleck offered his support before the meeting began, but also told the president that he wanted the record to be clear—he had been informed—but not consulted. The meeting turned out to be extremely tense and confrontational. But, all the flak came from Democrats—most notably Richard Russell, chairman of the Senate Armed Services Committee, and J. William Fulbright, chairman of the Senate Foreign Relations Committee.

Senator Dirksen, on the other hand, was consistently supportive and Halleck openly questioned Senator Russell’s demands for an immediate invasion of Cuba, claiming that the congressional leadership had recently been told that “it would take us three months to take Cuba. Am I right about that?” “I don’t recall that,” Russell muttered irritably in response. When defense secretary Robert McNamara explained that an invasion of Cuba would require at least 2,000 bombing sorties, Halleck probed further, “Bombing sorties with what kind of bombs?” McNamara, strikingly, left the nuclear option open: “Initially, iron bombs.”

Halleck also pressed the president for clarification on the most essential point: “are we absolutely positive from these photos” that the Soviet buildup had now become offensive? “Yes,” JFK answered. “We’re sure of that?” Halleck reiterated. “That’s correct,” the president replied firmly. McNamara then assured Halleck, “you might question the missiles, but you can’t question the IL-28s.” Halleck responded bluntly, “What are they? What’s an IL-28?” Jet bombers, the defense secretary explained, “capable of carrying a 4,000-pound bomb load. … These without any doubt whatsoever are offensive weapons.”

Returning to his office after the White House meeting, the unsettled but politically savvy minority leader told an aide: “You remember my prediction a month ago? I said he’ll pull the rug out from under the Republicans on the Cuba issue” before the congressional elections. “Well, that’s what he’s done.”

However, there is a remarkable footnote to this episode, captured in the final moments of the once-classified tape recording of the meeting. As the participants were leaving the Cabinet room, Halleck approached President Kennedy alone and said: “Mr. President … I didn’t know what I was called in for. Happy to come. I’m glad you asked me. I don’t have the background to make these decisions. You do. And I’ve been glad to speak a piece or two here, but, whatever you decide to do….” “Well I appreciate that,” the president replied gratefully. “I guess,” Halleck concluded pensively, “that’s it.”

Unaware that the discussion had been recorded and clearly affected by the terrible choices facing the president, Charlie Halleck’s human empathy, at least briefly, trumped partisan politics. One has to wonder if any comparable private moments are occurring in today’s Washington.