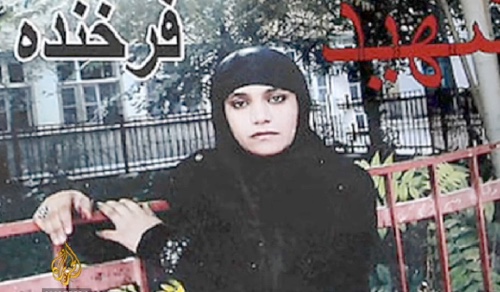 Afghans and people around the world mourn for the death of Farkhunda Malikzada, a 27 year old girl murdered by a fanatical mob. The death of Farkhunda is fresh on everyone’s minds and it has taken a couple weeks to process the events and what they mean for the war-torn country of Afghanistan.

On the 19th of March, Farkhunda, a dedicated student of religion, stood before the sacred shrine of Shah-do Shamshira and denounced its custodians for selling amulets. She was outraged by a practice she saw as superstitious, un-Islamic, and exploitative. Shortly after, one of the custodians of the shrine loudly accused her of burning a Qur’an, inciting an ignorant mob of men to descend on her like a pack of ravenous wolves.

Despite her protestations and declarations of innocence, she was stoned, beaten, and killed. Her body was repeatedly thrown from the roof of the building, run over by a car, thrown into a decaying river, and finally burned. Her life was taken and her body was desecrated. We are left asking, how could this have happened?

How could a group of men, raging against a supposed sacrilege, murder and desecrate the body of a person, especially that of a woman, despite how clearly both actions are forbidden in the very religion they were supposedly championing? The death of Farkhunda was a wakeup call. It stood in stark opposition to the image of Afghanistan as one of the few countries in the region with the highest number of female parliamentarians. It stood opposed to the progress made in rights and education for women.

Farkhunda’s death reminds us of the trauma and devastation of war that is all too real for Afghanistan. No platitudes about progress can deny that. For decades, Afghanistan has faced the horrors of war, for years it was subjugated to the oppression of the Taliban, and for the better part of the 2000’s it has faced the bombs and bullets of the United States and its allies. The effects of such violence are not easily erased.

Culture is the site of collective meaning and value that gives a nation cohesion. The culture of Afghans have been transformed by the violence they have suffered. The violence of war has penetrated into the very psyche of Afghans and distorted their values. War’s lessons are stark and its most enduring is a cultural logic that devalues life.

I am not proposing that all Afghans are violent. I am proposing that for generations Afghans have lived knowing that their lives hang in the balance. They lived in a society where their body was subject to the whims of the Taliban. They lived in a society where at any point a bomb might drop on their heads. They lived a life where nearly everyone lost someone to war. Life has a different meaning for such people. War has done violence to the culture and psyche of Afghans. It is a ravaging of the psyche that comes to light through the cracks in society. When tension and frustrations rise, it is the cultural logic birthed in war that inspires the mob.

This is how a book becomes more sacred than a young woman’s life. It is what gives voice to a mob. A colleague and insider within Afghanistan’s government has confessed the administration’s fears over this growing problem. He has admitted that violent gangs have begun to terrorize the capital city of Kabul. These gangs operate much like ISIS/ISIL does in Iraq. The mob that murdered Farkhunda included some of these people. Afghanistan’s government is struggling with the culture of violence that endures in these gangs and mobs.

Since her death, many have taken a stand. The calls for justice are ringing throughout the international community, Afghanistan, and those in the Afghan diaspora. But vindication for Farkhunda should not suppress the conversation about her victimization. Getting justice for Farkhunda is important, but ensuring that there are no more Farkhundas is as essential. In order to do this, Afghans must confront the cultural logic that remains rooted in their society.

This is Farkhunda’s message. She took a stand against the exploitation of the poor and desperate by those with religious authority. She challenged the custodians of the shrine and spoke up against ignorance. The culture of Afghanistan must be addressed, its values reassessed, and action taken to heal its trauma. Women must lead this movement. Men can be allies, but when it comes to women and their bodies, women are the ones with the right to lead the conversation and action. We saw the first stirring of this when Farkhunda’s body was carried during her funeral. For the first time in Afghan history, women carried the body and led the funeral. This was a momentous occasion that should give us hope.

In the coming conversation, let us not forget Farkhunda and her life. Farkhunda Malikzada was young, she was 27-years-old, she was an Afghan, and a dedicated Muslim. She was passionate, she was courageous, and she had a mission to stand up against those with authority and to educate and advocate for the vulnerable in society. She entered into a holy shrine to root out corruption and was killed by the violence and ignorance of a mob. Her life is quickly transforming into a hagiography. A religious woman standing against religious ignorance and exploitation. The transmutation of Farkhunda into a martyr is underway. Her cause becomes our cause.

Farkhunda had a mission to reassess what Afghans put value in. She pushed back against the superstition and exploitation of amulet-makers in an act that challenged what Afghans put stock in. Her death demands us to look at Afghanistan’s culture and what, as a society, holds the country together. What do Afghans choose to hold sacred and meaningful? Let us hope that they choose to value life. Let us hope Farkhunda lives on in her mission.