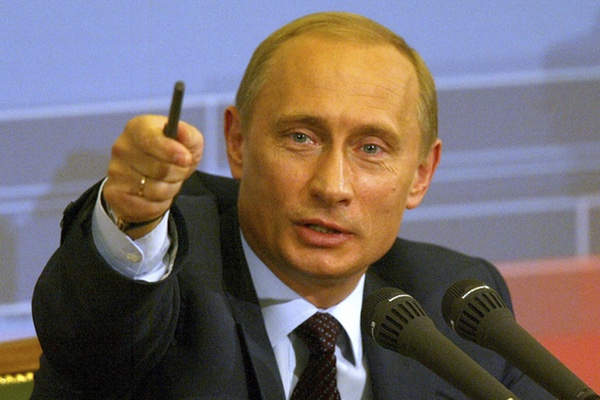 The fourth chapter of Mr. Putin: Operative in the Kremlin (expanded ed., 2015), an excellent work by Fiona Hill and Clifford Gaddy, is entitled “History Man.” The authors write: “Vladimir Putin is a self-designated student of history. He claims it was his favorite subject in school, and he remains an avid reader today. He also presents himself as a man of history with a special relationship to the subject.” But they also admit that like many other past leaders of his country—and one could add “of other countries”—he attempts to manipulate history for political purposes, and they add that “for Putin, history and the lessons it teaches reinforce the importance of serving the state.”

Like Peter the Great, Putin emphasizes the importance of strengthening the government and of state patriotism. As Hill and Gaddy write, “The first key to Vladimir Putin’s personality is his view of himself as a man of the state, his identity as a statist.” In addition to Putin being a statist and a “history man,” the authors sketch out four other “identities” that characterize him (“the Survivalist, the Outsider, the Free Marketeer, and the Case Officer”) and help explain his actions as a Russian leader.

Those in the West who see Putin as essentially the same man he was when he served in the Soviet KGB fail to recognize that, like many other Russians, he has been struggling for almost a quarter of a century to redefine “the Russian Idea,” what Russia is and should be. Soviet communist leaders, he realizes, made many mistakes, and he has no desire to restore communism. This does not mean that his KGB service did not affect him. It did, but so too did many of his other experiences during more recent decades. Hill and Gaddy, for example, claim that his present negative attitude toward the United States has been shaped primarily by his dealings with it during the last fifteen years.

In the chapter “History Man” there is a section entitled “Manipulating History: Putin and Stolypin.” Students of Russian history know that Stolypin was Tsar Nicholas II’s prime minister from 1906 until his assassination in 1911. Putin pictures himself as being like Stolypin in that both men came to power after troubled and uncertain times—in Stolypin’s case after Russia’s defeat in the Russo-Japanese War and the 1905 revolutionary unrest—and like the tsarist prime minister, Putin sees himself as a strong man but one who realizes the need for some reforms. On a trip to Kiev in 2013, Putin laid flowers at Stolypin’s grave, and in his December 2013 presidential address he referred to him as someone who was “capable of implementing major progressive reforms.”

Stolypin was more an authoritarian pragmatist than an ideologue. But how about ideology? In a future essay, I shall deal with the question of whether Putin is more of an ideologue, idealist, or opportunist, but here we shall consider some of the historical political ideas that have influenced him.

Despite stating in his millennium speech of December 30, 1999 that he was “against the restoration of an official state ideology in Russia in any form,” Putin (according to Hill and Gaddy) reformulated and adapted the Official Nationality ideology that existed under Tsar Nicholas I, who ruled from 1825 to 1855. That ideology can be summed up in three words, Orthodoxy, autocracy, and nationality.

On the occasion of Crimea completing the process of being transferred from Ukrainian to Russian rule in 2014, Putin stated: “Everything in Crimea speaks of our shared history and pride. This is the location of ancient Khersones, where Prince Vladimir was baptised. His spiritual feat of adopting Orthodoxy predetermined the overall basis of the culture, civilization and human values that unite the peoples of Russia, Ukraine and Belarus.” In various other ways he has also emphasized the centrality of Orthodoxy to Russian history and values and indicated that he has personally returned to the Orthodoxy which was cherished by his mother.

Under Putin the concept of autocracy has been replaced by “sovereign democracy.” According to Hill and Gaddy, “Sovereign democracy . . . is the epitome of a strong and powerful state, just as autocracy was in the tsarist era.” The new term is meant to suggest that “Russia is accountable and answerable to no one (certainly no outside power) apart from the opinion of the majority of its population.” Furthermore, the “universal norms of democracy are not Russian and have in fact damaged Russia’s political development. Russia must, therefore, return to a political system that is uniquely its own, that is sovereign and historically rooted.”

Putin’s emphasis on nationality also deviates somewhat from the way Nicholas I applied the principle: it is more inclusive and places less emphasis on the ethnic Russian nationality. Hill and Gaddy quote Putin as stating, “We are a multinational society but we are a single Russian nation, a united and indivisible Russia.” Putin knows his history well enough to realize the folly of exacerbating ethnic nationalism in a multinational country (as Russia remains even after the breakup of the USSR).

Regarding the influence of past Russian philosophers and thinkers on Putin, much nonsense has been written. New York Times columnist David Brooks has labelled Vladimir Solovyov [also transliterated as Soloviev and Solovev], Nikolai Berdyaev, and Ivan Ilyin as “Putin’s favorite philosophers” and indicated that reading them “is to enter a world full of melodrama, mysticism and grandiose eschatological visions.” A recent Politico essay title by Peter Eltsov, a professor at National Defense University, refers to writer Alexander Solzhenitsyn as “Putin’s Favorite Guru.”

“Favorite philosophers” and “guru” certainly overemphasize the influence of these thinkers on Putin and fail to acknowledge sufficiently the extent to which he is manipulatively cherry-picking their ideas.

In that Paul Grenier (on one of my favorite blogs, Johnson’s Russia List) has recently detailed how wrongheaded ascribing such influences are, especially in regard to the widely-respected philosophers Solovyov and Berdyaev, only a few additional comments are required here. Many years ago, at Georgetown U., I wrote a dissertation dealing with Solovyov’s opposition to Russian nationalists whom I labelled “Russophiles.” Putin has much more in common with them than he does with Solovyov.

Regarding Ilyin (1883-1954) and Solzhenitsyn, both of whom spent many of their later years in the West, the linking of them, although overdone, is not as far off the mark as it is with the two prominent earlier philosophers. Grenier acknowledges that “Putin regularly quotes” Ilyin and respects him, but also differs with him on some important points. Hill and Gaddy, who do not mention Solovyov, Berdyaev, or Solzhenitsyn, also admit that Ilyin has been “a favored reference point” for Putin, but the two authors’ words that “Putin has paid lip service” to some of Ilyin’s concepts suggest more manipulation than truth-seeking in Putin’s use of him.

Grenier notes that some of Ilyin's ideas “overlap with those of Solzhenitsyn, who was profoundly influenced” by Ilyin. In his Politico essay on Solzhenitsyn as a guru to Putin, Eltsov does not mention Ilyin, but quotes Putin as saying that many of his policies for Russia were “largely in tune with what Solzhenitsyn has written.” In noting the similarity of Putin’s criticism of Western values with that of Solzhenitsyn’s disparagement of them in his 1978 Harvard speech, Eltsov makes a legitimate point. Eltsov could have also mentioned, but did not, the writer’s admiration of Stolypin. But he goes too far in claiming that “recent political developments show that Putin indeed has followed many of Solzhenitsyn’s ideas, particularly in the area known as ‘the near abroad.’ ” Eltsov believes that Putin’s policies toward Ukraine mirror those of Solzhenitsyn, who also “saw Kazakhstan in the same light as Ukraine, suggesting that it was not really a separate state and that much of its territory is historically Russian.” Therefore, Eltsov concludes, “we might look to Solzhenitsyn’s writings for a clue as to where Putin’s next aggressive move might be: Kazakhstan.”

It would require a whole additional essay to deal with these statements. But Eltsov’s own words that “Putin chooses to follow only those ideas [of Solzhenitsyn] that fit his neo-imperialist and reactionary agenda” indicate that Putin is manipulating the Russian writer’s words for political purposes rather than treating him like a guru.

This manipulation is in keeping with Putin’s approach to past thinkers and history in general. At a November 2014 meeting with history teachers, he observed that they were meeting on National Unity Day, a Putin-created holiday emphasizing the importance of unity amongst the many Russian nationalities.

He referred to several historical events to buttress his emphasis. He observed that “National Unity Day honors the liberation of Moscow [in 1612] by militia members who were headed by an ethnic Tatar.” He declared that Russia lost World War I not because it was “beaten in battles on the front.” Rather, it was “torn apart from within.” He lamented the fact that many young people did not know of the heroes of World War II, that there are many examples of them, and that they included “soldiers of all different ethnic groups.”

He also contrasted the two world wars and hinted that maybe Stalin’s WWII domestic harshness was necessary to overcome the Nazis—and perhaps harshness is needed today to counter foreign threats: “The cruelty of the leadership likely played a certain role [in winning WWII] as well. We could, of course, argue about this and give political assessments. It’s just hard to say whether we could have won the war if the leaders had not been so cruel, if they were more like those in Nicholas II’s time [1894-1917]. It’s very hard to say. And what would the consequences have been if we’d lost? The consequences would have been simply catastrophic.”

Putin’s November remarks to historians also include criticism of the “Norman theory” that “statehood [to ancient Rus] came from outside” in the guise of Vikings. Putin also maintains that lack of political unity among Russian princes led to catastrophes like the Mongol invasion of the thirteenth century. The contention that the lack of a strong authoritarian ruler led to Russia being victimized by foreign powers is not a Putin invention. Rulers like Ivan the Terrible and Stalin also insisted on it.

Putin is far from unique among politicians, or even among professional historians, in attempting to manipulate history. But a true “history man” (or woman) is primarily a truth-seeker, one who puts discovering the truth before any political or personal causes, whether they are of an ideological, national, patriotic, class, ethnic, or gender nature. Philosopher and novelist Iris Murdoch in her The Sovereignty of Good writes of the “honesty and humility of the scholar who does not even feel tempted to suppress the fact which damns his theory.” Without denying that Putin believes much of what he says, he possesses neither the honesty nor humility of Murdoch’s hypothetical scholar. Politicians who do possess such virtues are rare—in any country. And even we professional historians must fight a constant battle to prevent our biases and causes from trumping truth-seeking.