This Is What Right-to-Work Means

Elizabeth Tandy Shermer is an assistant professor of history at Loyola University Chicago. She has published extensively about right-to-work laws in journals, edited collections, and her first book, “Sunbelt Capitalism: Phoenix and the Transformation of American Politics.” 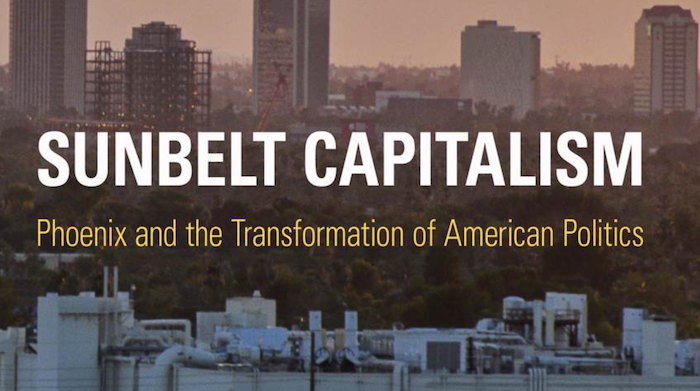 There’s something distinctly Midwestern about how Indiana, Michigan, Missouri, and now Wisconsin are passing right-to-work laws. Republican legislators (with significant business backing) introduced and narrowly passed these bills in 2012. Likewise, GOP governors were the ones to quickly, and without fanfare, sign them into law. Shock and protest in and outside the Midwest did not stop Republicans lawmakers in Missouri and Wisconsin from introducing right-to-work proposals in 2014. Presidential contender Scott Walker of course seems poised to sign any bill put before him. But not Missouri’s Jay Nixon, a Democrat unafraid to use his veto.

That’s not at all how the first right-to-work statutes were passed. Legislative maneuvering, gubernatorial grandstanding, and overtly enthusiastic business support would have kept these bills from being enacted in the 1940s and 1950s, when Southern and Western states were really the only ones passing these severe organizing restrictions.

These rules may not seem onerous but they are in fact dangerous and confusing regulations about all-important “union shop” membership clauses in contracts. Unions negotiate with employers to secure union-shop stipulations, which require employees to eventually join the local. That makes sense because non-members would still, by law, enjoy collective bargaining benefits, be covered under the contract that members negotiated, and be represented by the union during managerial disputes. All that work requires money, which necessitates dues. Union-shop rules ensure that everyone who benefits from the union helps pay for it (rather than free-ride on the contributions from others as happens without membership provisos). But these union-shop protections are ipso facto illegal in right-to-work states even if members want them. Under state right-to-work laws, a “person has the right to work, and to seek, obtain, and hold employment without interference with or impairment or abridgment of said right because he does or does not belong to or pay money to a labor organization.”

That guarantee certainly sounds benign, if not all-American. Who could be against the right to work, especially in a prolonged recession?

“Right to work” is in fact malignant, not just for organized labor but also a state’s economic health. Seventy years ago, when the first right-to-work referenda appeared, unionists warned that they only offered the “Right to Starve.” These rules may have been sold in the language of individual choice and opportunity but came at the expense of the strength to be found in the numbers of workers who wanted better wages and benefits as well as democracy on the shop floor.

When FDR signed the 1935 National Labor Relations (or Wagner) Act, he gave ordinary Americans the chance to make their own New Deal. One way was through organizing. Trade union leader John Lewis was among many who declared, “Roosevelt Wants You to Join a Union!” The thousands who did during the Depression and World War II reaped the benefits of collective bargaining, not an individual’s right to work. And union-shop clauses were one reason why many could finally buy what they built, which in turn lead to more postwar prosperity for all.

It wasn’t coincidental that, until recently, right-to-work laws were really only found in America’s southern half. There were unionized war production factories in these generally agrarian states. There would also be record high-unemployment as those plants shut down in the war’s final years. Citizens had flooded into whistle-stops like Phoenix, Dallas, and Atlanta but found themselves with nothing to do and unable leave. Local civic groups, usually Chambers of Commerce, could easily pitch restrictions on unions as a means to lure investment, and therefore jobs, back to desperate towns. Southern and Western boosters had help from manufacturers eager to find a non-union oasis from the unionized Steelbelt. These executives had helped the passage of Wisconsin’s 1939 Labor Peace Act, a model for early right-to-work laws. Its membership restrictions were not as strict and could be passed in a legislature that did not yet have to fear enraging working-class voters. Conservative Republicans, small business owners, and CEOs could not advertise their involvement in the mid-1940s when legislators and governors would also not dare enact the right-to-work. Too many voters considered labor rights the reason so many Americans had been lifted out of poverty in the Depression and World War II. So lawmakers turned bills into propositions and let the people decide. In 1944, Arkansans and Floridians approved the right-to-work but not Californians. Two years, later Arizona became the first western right-to-work state. The Supreme Court upheld that statute in 1948, a decision that extended to section 14(b) of the Wagner Act’s 1947 Amendments.

That subsection permitted states to pass right-to-work laws. Numerous initiatives cropped up across the country, not just in the South and West. Very few went the route today’s Midwestern Republicans are pursuing. That would have been political suicide, particularly in the Steelbelt, where labor rights had done as much to empower ordinary Americans at the polls as improve quality of life on the job and at home. Small business owners and manufacturing executives also could not openly support right-to-work initiatives. They still sent money to help the effort and did assert the right to work was about individualism, freedom, and opportunity.

So the first right-to-work push reached something of a stalemate by 1958. By then a low-wage arc of right-to-work states stretched from Arizona and Nevada all the way to the Carolinas. Executives, small businesses, and Republicans hardly abandoned foisting the right-to-work on their employees. They stopped pursuing it on Election Day and instead looked to courts.

Not today, of course. Midwestern Republicans and business leaders feel confident enough to pass right-to-work laws. Union membership has plummeted, even in the Rustbelt, which now makes it possible to be publicly opposed to unionism. Scott Walker’s popularity proves how politically advantageous it might be to reject labor rights. But even he knows enough not to turn right-to-work bills into propositions. They’d likely never pass, robbing him and other Republicans of proof that they can be tough on unions and a friend to business, whose donations they’ll need to keep getting reelected.

Will this Midwestern approach to the right-to-work help them win? Walker survived the recall that happened after he slashed the rights of public employees. But now he’s taken on the whole labor movement, which has the power to remind Americans, not just Wisconsinites, that the right-to-work really just guarantees the right-to-starve.