This Is When Muslims in the Middle East Turned to Extremism

Richard Drake is the author of The Education of an Anti-Imperialist: Robert La Follette and U.S. Expansion (University of Wisconsin Press, 2013). 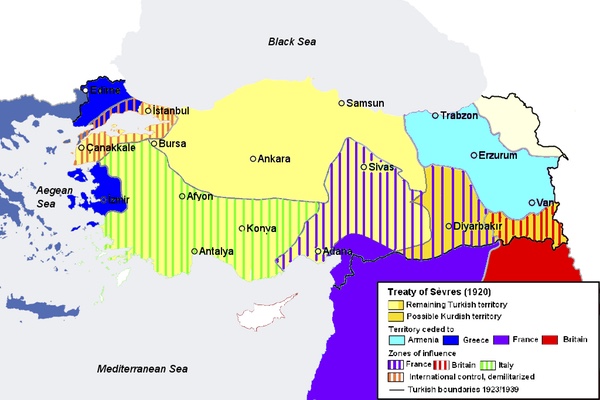 In his Messages to the World, Osama bin Laden identified the Treaty of Sèvres as the starting point of Islam’s vendetta against the West. Sèvres is one of the five treaties that concluded the First World War. Of the five, the Treaty of Versailles received the most attention at the time because it dealt with Germany, still, even in defeat, the strongest single power on the European continent and the chief worry of the victors.

The harshness of the Versailles Treaty, the continuing blockade of Germany, and the brutal military occupation of that country paved the way for Adolf Hitler and the Nazis, who are best understood as a revenge party. Had the Germans been treated differently at the end of the First World War, in accordance with Woodrow Wilson’s Fourteen Points, instead of with contempt and vindictiveness, their newly installed democratic republic would have had a much better chance to survive and to withstand the Nazis.

Similarly, Sèvres departed in every key respect from Wilson’s Fourteen Points. The President on 8 January 1918 had spoken loftily about the higher aims of America’s war policy. He wanted the war to result in a more democratic and peaceful world. His Fourteen Points included arms reduction, freedom of the seas, equality of trade, open diplomacy, and other liberal ideals.

Wilson made clear the applicability of his ideals to the Arabs. In the fifth point, he promised a world historical innovation: “a free, open-minded and absolutely impartial adjustment of all colonial claims.” The rights of colonial peoples would be strictly observed in the postwar reorganization of the world.

Wilson’s twelfth point spoke directly to the Arab situation: “The Turkish portion of the present Ottoman Empire should be assured a secure sovereignty, but the other nationalities which are now under Turkish rule should be assured an undoubted security of life and an absolutely unmolested opportunity of autonomous development.” The absolute absence of molestation would have been another historic first for the Arabs in modern times.

At the Paris Peace Conference, which began in January 1919, Middle East issues figured very prominently in the proceedings. In his monumental history of the conference, Woodrow Wilson and World Settlement: Written from His Unpublished and Personal Materials (1922), Ray Stannard Baker had the advantage of first-hand observation as the President’s personal secretary. He noted that when the distribution of the Ottoman Empire territories came up for discussion, the topic “raised at once the mouth-watering ambitions of France and Great Britain regarding the fabulous wealth of the Turks.” The fundamental causes and aims of the war could be surmised from the avidity of the haggling that followed.

T. E. Lawrence, another eyewitness to the Paris Peace Conference, recorded his impressions of the treachery that annihilated the legitimate hopes of the Arabs for independence. Seven Pillars of Wisdom, the account of his exploits as “Lawrence of Arabia,” is a book chiefly about betrayal, his own and that of Britain in dealing with the Arabs. He presents himself as a double agent, ostensibly fighting for Arab freedom while really working for the British Empire. “I was continually and brutally ashamed,” he confesses. He became a master of deception, but never deceived himself: “The fraudulence of my business stung me….I was raising the Arabs on false pretenses and exercising a false authority over my dupes….”

Lawrence wrote much of Seven Pillars between February and June 1919 in Paris where, frequently seen in an Arab headdress with his British uniform, he attended the Peace Conference. He described the negotiations as the culmination of deep-laid plans of imperialist exploitation. British and French colonial policy, enshrined in the secret Sykes-Picot agreement of 1916, completely eclipsed the rights of the Arabs, as he had feared all along would be the case. The Balfour Declaration granting a homeland to the Jews in Palestine set a second seal on the fate of the Arabs. Oil, empire, and Zionism formed an invincible combination against them. Violence erupted in Palestine in 1920. It has not finished yet.

That same year, in August, the Treaty of Sèvres made its long-deferred appearance, sixteen months after the Middle East first came up for discussion at the Paris Peace Conference. Sèvres took the form of a diktat even more draconian than the one inflicted on Germany. The Ottoman Empire ceased to exist, its territories stripped away by Great Britain, France, and Italy in blatant repudiation of the Fourteen Points.

The 433 articles of this 154-page-long document constituted a Christmas wish-list for the new imperialist masters of the Middle East. Article 231 in the Treaty of Sèvres, the number in the Treaty of Versailles announcing Germany’s responsibility for the Great War, assigned the same moral guilt to the Ottoman Empire: “Turkey recognizes that by joining in the war of aggression which Germany and Austria-Hungary waged against the Allied Powers she has caused the latter losses and sacrifices of all kinds for which she ought to make complete reparation.” The Allies acknowledged that Turkey’s current financial resources would not permit her to make cash reparations, in the German manner. In a gesture of solemn magnanimity, they offered to waive reparations in Turkey’s case, taking land, markets, and resources instead. In addition, an Allied Commission was to be set up to supervise the country’s finances; the term “supervision,” however, did not quite convey the true meaning of the economic enslavement that the Allies had in mind for the Turks.

An entire section of the Sèvres Treaty covered Syria, Mesopotamia, and Palestine. Syria and Mesopotamia would be recognized provisionally as independent states, “subject to the rendering of administrative advice and assistance by a Mandatory until such time as they are able to stand alone.” The advice and assistance of the two Mandatories, Britain and France, sparked immediate resistance by the inhabitants of those regions, some clearly identifiable repercussions of which are playing out today in Iraq, Syria, Gaza, and the West Bank.

The Treaty provision for Palestine included this passage: “The Mandatory will be responsible for putting into effect the declaration originally made on November 2, 1917 by the British Government and adopted by the other Allied Powers, in favor of the establishment in Palestine of a national home for the Jewish people, it being clearly understood that nothing shall be done which may prejudice the civil and religious rights of existing non-Jewish communities in Palestine or the rights and political status in any other country.” Throughout the Muslim world today resentments abound over the broken promises in the Balfour Declaration concerning guarantees of non-Jewish rights.

Osama bin Laden’s analysis of the Treaty of Sèvres reflects the historical understanding of Muslims world-wide who view him as a truth teller of unrivaled integrity and the paramount hero of our time. The authors of The 9/11 Commission Report estimate that about ten million Muslims so regard him. Instead of shrinking the political base of radical Muslim groups, Western policies and actions have expanded it.

Bin Laden declared on 3 November 2001 that the Treaty of Sèvres inaugurated eighty years of Muslim humiliation at the hands of the West. At war’s end, the entire Muslim world fell “under Crusader banners, under the British, French, and Italian governments. They divided up the whole world between them, and Palestine fell into the hands of the British.” The United States, complicit through its banks and oil companies in the postwar exploitation of Islam, eventually inherited the mechanisms of imperialist control over the Middle East, he explained. Contemporary events in the Middle East, then, should not be seen as isolated incidents, but “as part of a long chain of conspiracies, a war of annihilation in all senses of the word.”

When considering the emergence of radical Islam or any of its actions down to the Charlie Hebdo massacre of 2015, it is necessary to keep in mind the deep historical background extending all the way to Sèvres. These distant events are in the foreground of the Muslim radicals inspired by Osama bin Laden.