The Nonsense Myth About Grant and Lee

We are comfortable with our myths. They are like children’s favorite bedtime stories, endlessly told and retold, warm, comforting, and timeless. Our myths help us make sense of the world as we perceive it, or as we want it to be. No wonder they die hard. Not surprisingly, the Civil War generated perhaps a greater body of mythology than any other epoch in our history, and its resilience and resistance to correction is inertial. Moreover, regionality is no guide to who believes what. The most die-hard neo-Confederates today often as not live north of Mason and Dixon’s line. 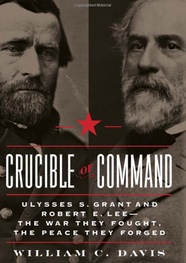 Witness the apotheosis of Robert E. Lee. One essayist declared him the only human in history to demonstrate character, morality, and sacrifice equal to that of Christ. On a more terrestrial scale, no fewer than five times the United States Post Office has honored this man who once fought against its government by placing him on its postage stamps. In a 1954 series devoted to our most distinguished Americans, Lee appeared with Washington, Jefferson, and Lincoln, while his opposite number Ulysses S. Grant was overlooked. Still Grant had at least nine stamps of his own, but usually at lower denominations than Lee’s. Subliminally even our mail has told us that Lee was worth more than Grant.

That seems to have been the conclusion of history for 150 years. Certainly it has been the verdict of buffs and amateur historians caught up in the romance and mythology of the “Lost Cause.” That gave rise to a problem, though. If Lee was so superior to Grant in every way, then how could Grant defeat him? The solution was a whole subset of myth about Grant, that despite his low birth, a career of relentless mediocrity before the war, and supposed perpetual alcoholism, he made up for a complete lack of strategic or tactical ability by dumb luck and using masses of blue-clad cannon fodder to overwhelm the gentlemanly Lee by force of numbers. Grant won because he was no gentleman and he did not fight like one, and thus Lee the gentleman was never really beaten.

This is all as nonsensical as it is sophomoric. Had there been no war in 1861-1865, it is improbable that anyone today would know their names, let alone deify or vilify them. Grant would have remained an obscure but well liked—and non-alcoholic—Midwestern merchant, or farmer if he had his choice, and Lee would have retired with distinction and a small pension after a lifetime of lackluster service in the army, also to become a farmer if he could.

Instead the war thrust them onto a stage where their natural genius flourished and made them icons. By 1864 Grant was the most popular man in the Union, much more so than Lincoln, who faced wide and bitter opposition (and who feared for a time that Grant might challenge him for nomination that year). Meanwhile Lee was far more popular in the Confederacy than President Jefferson Davis, and by 1864 was proposed openly as a military dictator should Davis be removed from office.

Dismissing the nonsense surrounding them is easy, but with that done and when we take them on their comparative merits, the differences between them are measured in motes. Take Lee in his worst moments—the horrific frontal assaults at Malvern Hill on July 1, 1862 or the grand charge of July 3, 1863 at Gettysburg—and Grant’s lowest ebbs match them—the attack at Cold Harbor in 1864. Behold Lee’s finest moment—the devastating flank attack at Chancellorsville on May 2, 1863—and it cannot overshadow Grant’s movement of over 100,000 men across the James River June 12-17, 1864, without Lee’s knowing it.

Each could be careless and both were surprised by the enemy more than once, yet put either commander in a desperate situation or confront him with the unexpected, and each demonstrated precisely the same reaction—a determination not to retreat but rather to stand and turn the situation to his advantage. And in the end both enjoyed equal quotients of a singular gift that separates leaders from followers. They were willing. These were no consensus commanders sharing responsibility with councils of war. Grant and Lee could make the big decision and go on comfortably with the knowledge that everything might be at risk. Their strategic precepts were not much different from those long taught to soldiers, and virtually all experienced or professionally educated generals knew what a commander ought to do. It was when the scene shifted from quiet classroom that most forgot what they had learned amid the chaos and terror of the battlefield. But not Grant and Lee. Nothing seemed able to rattle their presence of mind in action, and that gave them an edge over virtually all opponents save each other.

A popular pastime with historians has been to limn these two as leaders somehow representative of their respective causes, as if the two sides subconsciously sought not just commanders but symbolic spokesmen with swords, Confederate Lee the last of the old America and Yankee Grant the first of the new one. Like so much of what we like to think we know of them, that too is wide of the mark. Erase their names, take away the colors of their uniforms, forget the place names associated with their defeats and triumphs, and look solely at what they did, how they planned, how they led, how they reacted, and they become practically indistinguishable from each other. Put that Grant in command of a Confederate army and return that Lee to his old Union blue, and the outcome of the war surely would remain unchanged.

Jefferson Davis wrote in May 1863 that “a General in the full acceptation of the word is a rare product, scarcely more than one can be expected in a generation.” It is one of the enduring marvels of the Civil War that not in a generation but in the span of just four years there emerged in America not one but two generals “in the full acceptation of the word,” who were in every way equal to the challenges before them, and ready to find in each other their preeminent opponents.