How an International Perspective Changes Our Understanding of the Civil War

Don H. Doyle is McCausland Professor of History at the University of South Carolina. He is author of The Cause of All Nations: An International History of the American Civil War (Basic Books, 2015). 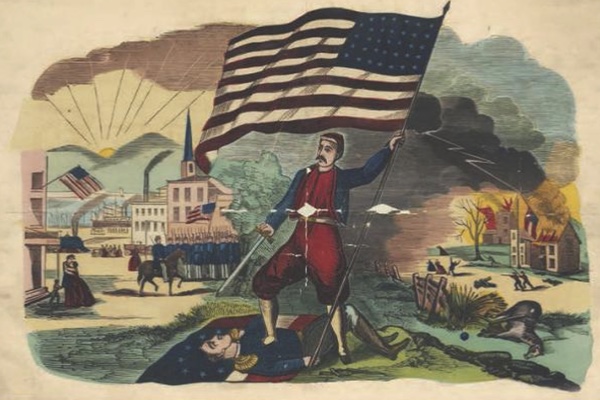 “Some of our worst navel-gazing has occurred in connection with the Civil War,” David Potter once wrote. Historians seemed content to see the war as “a conflict all our own, as American as apple pie.” More than any other episode in America’s past, the Civil War has remained firmly encased within a tight national narrative. An earlier generation told the tale of a tragic brother’s war. Now we tend to see it as the painful first step in America’s reluctant reckoning with race. In either telling it lies at the heart of the story Americans tell themselves about themselves. 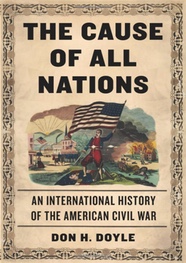 What value would be added by viewing the war from outside the nation? How does it change our understanding of the war to situate it within a larger international context?

One simple answer is that the war mattered greatly to the world. In newspapers and magazines, in meeting halls, churches, taverns, lecture halls, workers unions, and at posh dinner parties, foreigners followed the war with great interest and they debated what it meant for their future.

It was conservatives who first promoted the idea that the rupture of America’s so-called Great Republic proved the failure of the entire republican experiment. They were delighted with the prospect of a fragmented, weakened United States. Some aristocrats predicted that all the troubled American republics would find their way back to monarchy before long.

Unionists abroad soon embraced the idea that the war would be an epic battle in the historic struggle between reform and reaction, ongoing since the American and French revolutions. Karl Marx proclaimed America’s war the “first grand war of contemporaneous history” in which the “highest form of popular self-government till now realized is giving battle to the meanest and most shameless form of man’s enslaving recorded in the annals of history.” French liberals found la question amércaine a convenient excuse to obliquely criticize Napoleon III’s autocratic empire. For Latin Americans this was more than a parlor debate. Spain and France took advantage of the American debacle to take back American empires and restore the troubled Latin American republics to monarchical order and Catholic authority. Latin America was about to witness a “war of the crowns against the Liberty Caps,” the president of Peru predicted.

My second point is that what foreign observers thought about America’s war also mattered greatly to its outcome. Government leaders in Britain and France remained neutral, but many favored the fragmentation of the United States and were waiting for the opportunity to intervene by mediating peace on terms of separation. Union secretary of state William Seward crafted a foreign policy that combined threats to “wrap the world in flames” if any nation dared lend aid to the rebellion with ingenious efforts to align the Union cause with ideals of liberty, equality, and government by the people. He sent over speakers and special agents and secretly funded history’s first deliberate, state-sponsored public diplomacy program. It succeeded not by propagandizing so much as by “soft-power” tactics that involved enlisting the pens and voices of sympathetic foreign spokesmen. It worked. By early 1863 the growing public support for the Union, solidified by Lincoln’s Emancipation Proclamation, imposed a high political cost on any government that dared move to intervene.

My final claim for an international framing of the war is that its outcome also mattered greatly to the world. Once slavery ended in the United States, Spain and Brazil were exposed to new pressures at home and abroad. Spain, responding to promises of emancipation by Cuban revolutionaries, introduced a free womb law in 1870, which effectively put slavery on the road to extinction. Brazil, the last bastion of slavery, followed suit the next year. “We did not need a civil war” to end slavery, one Brazilian politician put it succinctly; “the world laughing at us was enough.”

The Union victory also rescued democracy from extinction. Lincoln was hardly bragging when he called America the “last best hope of earth.” Except for Switzerland, there were no republics of any size in Europe. Latin America’s young republics had been wracked by civil wars, pronunciamentos, and military despotism since independence. Until 1861 the United States had stood as a lonely example of a working republic in a world of empires, monarchies, and military despots.

Against all predictions to the contrary, the Union astonished the world by proving that a democratic society could actually mobilize a massive citizen army, endure four grueling years of war, and even survive an assassination without succumbing to anarchy or despotism. The trial of democracy, it seemed, had returned a very different verdict from the one conservatives had relished four years earlier. One US diplomat wrote from France that the “mysterious power of republican institutions was never so highly estimated here as now, never.”

Quite apart from the resilience of America’s democracy, the years after 1865 witnessed a stunning resurgence of republican success throughout the Atlantic world. European empires retreated from the Americas. Britain set up the Dominion of Canada in 1867 to govern itself. Russia sold Alaska to the US the same year and withdrew from the Western Hemisphere. Spain pulled out of Santo Domingo only to face a fierce decade-long republican insurrection in Cuba. France withdrew from Mexico in 1866 and left Maximilian to face the triumphant Mexican Republic’s firing squad. The shots that ended this European experiment in American monarchy sent a mournful echo across the Atlantic.

The Union’s victory also shook the thrones of Europe. In the face of massive public demonstrations, Britain passed the Great Reform Act of 1867, which vastly expanded the right to vote. Spain’s Glorious Revolution of 1868 deposed Queen Isabella II and launched a brief experiment in popular government. Napoleon III’s Second Empire collapsed in disgrace during his disastrous war with Prussia; France’s Third Republic was proclaimed in 1870. That same year the Italians completed the Risorgimento when they stormed the gates of Rome and reduced Pope Pius IX, the nemesis of liberal Europe, to a prisoner of the Vatican.

The experiment in government by the people survived the crisis of the 1860s only to face far graver challenges in the twentieth century. In 1933 democracy’s most notorious adversary, Adolph Hitler, looked back with regret at America’s Civil War: “The beginnings of a great new social order based on the principle of slavery and inequality were destroyed by that war, and with them also the embryo of a future truly great America.” That war might have established “a real Herren-class that would have swept away all the falsities of liberty and equality.”

America’s Civil War was much more than just a civil war. It was part of an international crisis out of which the imperiled principles of liberty, equality, and self-government experienced a new birth. The Union’s victory changed the world not only “for today,” as Lincoln said, but “for a vast future also.”