We Will Always Give a Damn: Gone with the Wind at 75 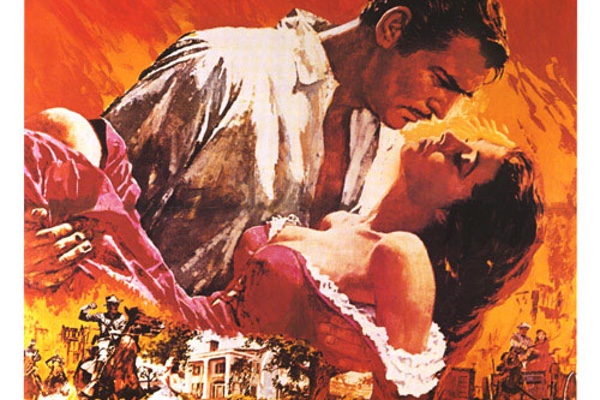 Tonight, December 15, amid much celebrating, the 1939 smash hit film, Gone with the Wind, the four hour saga about the Civil War, will mark its 75th anniversary at a special 7 p.m. screening at the Paramount Theatre in Atlanta. It is an anniversary worth noting, too, because in all those years, until Avatar, GWTW reigned as the box office champ of all time, in addition to its many theatrical and television records. Rhett, Scarlett, Ashley, Melanie and all their Confederate brethren may have lost the war, but they won the accolades of a nation, again and again and again.

Why has the film about a war fought so long ago held the imagination of the American public all these years? I mean, fiddle dee dee, what is the magic?

The answer is as simple as it is complicated.

First and foremost, it not just a reminder of the war that tore the nation apart, but a reminder that the soldiers on both sides, no matter who won, were gallant. They fought nobly for their cause, whether it was right or wrong, and triumphed because they were Americans.

Second, it might be the saga of the brave men on both sides, and tough as nails Rhett Butler, too, but it is reallly the story of Scarlett O’Hara and her world. It is a woman’s film and shows Scarlett in all of her feminine finery, but also her struggle to save her home, Tara, after the Yankees destroy it, too. Scarlett is tough. She is beautiful. She is witty. But in the end, she is vulnerable. She ignores the one man who loves her, Rhett, to chase the man who did not, Ashley. Every man in American wanted her and every woman sympathized with her.

Third, it is the struggle of a divided nation to fight its way back together and charge on into the future. It may have hobbled into history because the slavery ended by the war turned into years of racism, but move on the nation did.

Even though it was based on a best seller by Margaret Mitchell, of Atlanta, GWTW was not assured of film success. Hollywood studio chiefs lambasted the idea of turning the novel into a film. It was too long and too complex. Even Clark Gable, who became a legend in it, did not see any future for the movie. “I don’t want the part for money, chalk or marbles,” he snorted at producer David O. Selznick about the role of Rhett.

African Americans were certainly not happy with the film. They thought it demeaned all blacks, even Mammy (Hattie McDaniel won the Oscar for her sassy portrayal of the maid). The critic for the black newspaper the Chicago Defender called it “a weapon of terror against black America.”

Most of the critics loved it though. The New York Times critic summed it up best when he called it simply “the greatest motion picture we have seen.”

I was flipping television channels last week and caught the movie again, just as it started. It was 7 p.m., so I knew I could watch the whole film, and did. There is still much wrong with Gone with the Wind. The depiction of the slaves, as “loving darkies” really was grotesque, but you have to remember it was made in 1939 and that was Hollywood’s view of the slave. The KKK was cut out of the script to sanitize the movie. The Yankees are seen as far too barbaric.

Still, even after 75 years, Gone with the Wind pacts an historical and dramatic wallop. It is at once one of the great war films of all times, but it is also a vivid and loving portrait of Scarlet, and admirable portrait of the bold, brave Rhett Butler and a four hour tribute to American valor, regardless of which side it was on.

75 years from now the film will have the same impact. It will be treasured in that distant tomorrow, too, because, well, as Scarlett would say, tomorrow is another day.

GWTW contained some of the most vivid scenes in film history, such as all of the wounded lying in the main square in Atlanta, the weeping and wailing of the wounded in the Confederate hospital ward and Scarlet, all alone at twilight in the middle of one of Tara’s vast farm meadows, shaking her fist at the crimson sky and vowing that she will conquer all.

No film about the South ever caught the feelings of the southern people like Gone with the Wind. The movie opens with a scroll that explains that it was the land of the cavaliers, with their grand balls, fine horses and mint juleps. It was a land that was plowed under by a war and by history and yet a land whose people rose up later, and rise up today, to re-build and re-shape America.

The anniversary celebrations have been ongoing over the last two months. On September 28 and October 1, the movie was shown in 650 movie theaters across the nation and, once again, generated substantial ticket sales. The film was aired on television several times this year. It will be for years to come.

This week, the anniversary week, the film will be shown again in Atlanta. The Atlanta History Center has a special exhibit on the making and history of the movie. Nearby Marietta, Georgia has a Gone with The Wind Museum. All year, the museum has hosted a 75th anniversary exhibit of the movie. Different museums around the country have staged Gone with the Wind exhibits, or film exhibits featuring Gone with the Wind dresses. The Tara set from the movie is in a warehouse in Atlanta where workers are trying to re-assemble it.

The movie, of course, will continue to be aired on television and in theaters and no matter when and when it is, Americans will, indeed, always give a damn.