Just How Much Does the Economy Affect the Outcome of Presidential Elections? 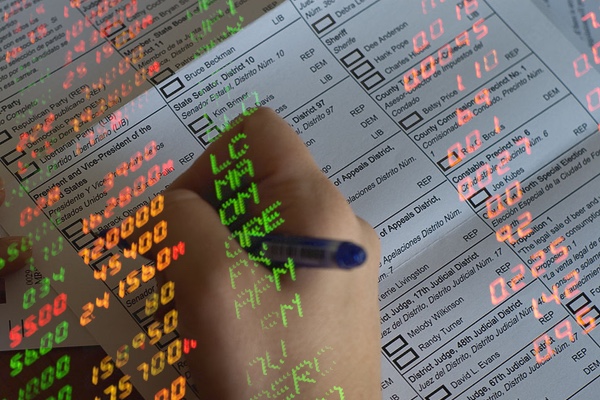 In a fascinating paper, Princeton economists Alan S. Blinder (formerly Vice Chairman of the Federal Reserve Board) and Mark W. Watson point to the significance of economic factors in presidential contests (see pages 14-16, especially). Their synopsis of elections since the end of the Second World War reveals that presidential candidates operated with distinct advantages or disadvantages, depending on whether their party or their opponent’s party recently governed in a period of prosperity or economic hardship. In many instances the state of the economy appeared to make as much or more of an impact on the presidential race than the candidates’ personal attributes, campaign strategies, or debating skills.

It is intriguing to expand upon the insights of Blinder and Watson and consider the potential influence of economic conditions on the 2016 presidential race. The state of the economy could play a major role in the outcome. But long-term wage stagnation could make that factor less significant in 2016. The disruptive character of stagnant wages was evident in the 2014 congressional elections. Even though the U.S. economy had improved substantially in recent years, Democrats lost decidedly in many sections of the nation. Democrats’ failed to excite voter support, partly because average American workers had seen little or no personal economic improvement in the years of the Obama presidency and Democratic influence in Washington. If this situation does not change in the next few years, the condition of the overall economy in 2016 may not influence the voters’ decisions as much as it has in the past.

Drawing upon insights presented by Blinder and Watson, it is evident that economic factors often affected voters’ judgments in presidential elections up until recent times.

For instance, historians often cite Harry S. Truman’s fighting spirit and the Republicans’ flawed strategies when identifying causes of the Democratic president’s surprise victory in 1948. Yet Truman’s campaign was buoyed by early signs in 1948 of an impressive post-war economic boom. Real Gross Domestic Product (GDP) had dropped precipitously in 1946 (a development that made pundits think Truman would lose in 1948), but a substantial economic recovery was underway by the time of the November, 1948 elections.

Richard Nixon ran for president in 1960. He lost, not only because he ran against a handsome, charismatic, and eloquent Democrat named John F. Kennedy. A third recession of the Eisenhower era, stretching from 1960 to 1961 undermined Nixon’s campaign. JFK excited voters with a promise to “get America moving again.”

Lyndon Baines Johnson won easily against Republican Barry Goldwater in 1964. Goldwater’s image as an extremist hurt his campaign, but economic conditions also made the Arizona Senator’s efforts difficult. The Kennedy/Johnson tax cut of 1964 quickly stimulated business expansion. Voters were in an optimistic mood when they went to the polls in 1964. Four years later, Richard Nixon benefited from the Johnson Administration’s economic troubles. Worries about inflation related to huge U.S. military commitments in Vietnam cut into voters’ support for the Democratic candidate, Hubert Humphrey. Federal efforts to deal with the emerging economic problems through fiscal and monetary policies aided Nixon, who won a race that turned close in the final days.

The economy first helped and then hurt Democrat Jimmy Carter. Shifts in energy prices made a big impact on Carter’s fortunes. Republican President Gerald Ford campaigned under a cloud in 1976. “Stagflation,” a combination of economic recession and price inflation, created difficulties for the GOP’s candidate, as did Ford’s pardon of Richard Nixon. Jimmy Carter secured a victory. Four years later, Carter’s efforts to remain in the White House failed. Jimmy Carter stumbled as a leader, and economic conditions exacerbated his difficulties. Oil prices surged in 1979 and inflation turned worse. The chairman of the Federal Reserve, Paul Volker, tried to tame inflation with tight monetary policies. Business and employment slowed considerably during the months that Carter campaigned for re-election.

In 1980 Ronald Reagan excited voters with promises to revive the economy. Reagans’ popularity slipped during his first two years in office, in large part because of a deep recession. By late 1982, however, Paul Volker’s monetary squeeze appeared to be working. Inflation declined. Additionally, global production of petroleum had expanded and prices dropped substantially. In 1984 Reagan won reelection in a landslide. Perhaps the Republican president’s ebullient personality would have carried him to victory under less promising conditions, but Reagan surely benefited from the favorable economic winds at his back.

Following the Persian Gulf War, President George H. W. Bush received a 90% approval rating and seemed well-positioned to win a second term in 1992. Then a troubling recession in 1990-1991 undermined his popularity. George H. W.’s Bush’s disapproval rating hit 64%. Bill Clinton projected an effervescent personality in the 1992 campaign, but that was not his only advantage over Bush and an independent candidate, Ross Perot. The voters’ unhappiness with the economy figured prominently. Clinton strategist James Carville famously identified the main issue: “It’s the economy, stupid.” Two years after the 1992 victory, Bill Clinton’s presidency was deeply troubled. Republicans crushed Democrats in the congressional races of 1994, and the GOP appeared to have enough clout in Washington to block Clinton’s initiatives. Republicans hoped to make Clinton a one-term president. In 1996, however, the U.S. economy looked much stronger than it had a few years before. Voter optimism helped Clinton to dispatch his competitors, Republican Bob Dole and independent Ross Perot.

Unfortunately for the Democrats, their candidate in 2000 chose to keep his distance from Bill Clinton. Al Gore, Vice President during the previous eight years, refused to exploit the Clinton connection to the fullest during his presidential campaign. Gore feared that voters would view an association with Clinton negatively because of the president’s scandalous relationship with a young intern. Al Gore made a strategic mistake. The U.S. economy had been on a sustained climb though most of Bill Clinton’s eight years. Gore failed to take adequate credit for Clinton-era prosperity. He won the popular vote but lost the election after the Supreme Court intervened in the Florida vote count.

Barack Obama benefited from economic conditions during both of his presidential campaigns. With the collapse of Lehman Brothers investment bank in September 2008, the U.S. and global economies began to crash. Many voters associated Republicans with the financial crisis. They backed the newcomer, Barack Obama over Senator John McCain, who displayed little understanding of economics during the campaign. In 2012 Republican Mitt Romney claimed that he, a successful businessman, knew better than President Obama about creating jobs and fostering prosperity. Romney’s message failed to resonate. There were many reasons for Romney’s defeat, but one of the most important was his inability to gain traction on economic issues. Mitt Romney could not effectively characterize Barack Obama’s administration as incompetent in business affairs. Stock markets had climbed steeply since their lows in early 2009, and the unemployment rate had declined substantially by election time.

Since the U.S. economy has been on an upward tear from the first months of Barack Obama’s presidency, Hillary Clinton or some other Democratic presidential candidate should have a distinct advantage in 2016. The Democrats’ future also looks promising because of the sudden drop in energy prices. A slowdown in global demand for oil, declining production costs related to fracking, and a glut of oil in global markets have rapidly cut the cost of a barrel of crude oil from about $100 to less than $70. Price drops work like a large tax cut or a welcome pay raise. In coming months and, perhaps, years, Americans will need less money to purchase gas for their car or heat their home. Consumer products may be cheaper, since they will be manufactured and transported at reduced cost. By the time of the 2016 elections, the benefits of reduced expenditures for energy may be more evident to voters than they were at the time of the 2014 congressional elections. Optimistic voters may reward the Democratic presidential candidate.

Democrats cannot, however, be certain that the U.S. economy will be dynamic in November, 2016. There are some troubling signs on the horizon. Global business has been slowing, especially in Europe. The U.S. economy has been growing more impressively, but Wall Street analysts warn that the lengthy stock market boom cannot last forever. Values have been climbing since early 2009. A serious market “correction” might arrive at a bad time for Democrats – weeks or months before the 2016 election.

Also, despite vigorous business expansion in recent years, most working Americans are not realizing true economic improvement. Employment opportunities have expanded, but many of the new jobs are part-time. They do not pay good wages, and they offer few benefits. In contrast, individuals with technical skills and advanced degrees often command strong earnings. Income inequality has become a glaring issue.

In recent decades individuals and families at the top have realized extraordinary gains, while the rest of the U.S. population saw disappointing returns. The Congressional Budget Office found that between 1979 and 2007 the top 1% of households realized 275% growth of inflation-adjusted income. In contrast, the bottom 20% of Americans saw growth in those 28 years of just 18%. Another study by the Economic Policy Institute revealed that between 1983 and 2010 approximately three-quarters of all new wealth went to the richest 5% of households, while the bottom 60% of households actually turned poorer over that period. Data from the Labor Department reveal that income for the middle 60% of the U.S. population has stagnated since 2007.

The angst of working Americans was evident in the 2014 congressional elections. Despite improvements in equity markets and corporate earnings, voters felt a pinch. Republicans cast President Obama as the culprit in their campaign rhetoric. They claimed his flawed leadership left millions of Americans struggling to earn a decent living.

President Barack Obama and Democratic senators have been dominant in Washington in the years of a remarkable economic turnaround, yet they failed to convince voters that their policies helped in significant ways to foster a recovery. A post-2014 election headline in the New York Times indicated, “Democrats Say Economic Message Was Lacking.” The Times reported thatDemocrats could not project the kind of broad vision in 2014 that inspires voter turnout. Larry LaRocco, a former Democratic congressman from Idaho, identified the challenge Democrats face as they look ahead: “What do we stand for?” he asked. In 2016 Democrats will need to convince voters that they do, indeed, have an effective plan for economic growth.

The Democrats’ efforts to persuade voters that the Obama presidency has produced results may become easier if recent employment statistics augur a trend. The Labor Department reported that employers added 321,000 jobs in November and, even more significant, the hourly earnings of ordinary workers jumped sharply. If future reports continue to show wage gains, the Democratic candidate will benefit from favorable economic winds. If the November gains prove a fluke and wage stagnation persists, Republicans may be able to capitalize on voter discontent in 2016, much as they did in 2014.

Whatever the situation, economic conditions will likely affect the outcome– as it usually does in presidential contests. Yet when writing and speaking about the campaign, many pundits will overlook this important factor. They will focus on the candidates’ personalities, rhetoric and strategies rather than evidence from history that suggests the state of the economy often has a major impact on the voters’ decision.