Hard Truths about Britain’s Entry into World War I

Douglas Newton was an Associate Professor in European History at the University of Western Sydney until his retirement in 2008. He is the author of  “British Labour, European Socialism, and the Struggle for Peace, 1889-1914 and “British Policy and the Weimar Republic, 1918-1919.” His latest book is “The Darkest Days: The Truth Behind Britain’s Rush to War, 1914” (Verso, 2014).

In October 2012 Prime Minister David Cameron announced that Britain would mark the centenary of the Great War with a “commemoration that captures our national spirit.” However, some commentators were uneasy that the ceremonies would not be nationalist enough. During 2013, there were calls for the righteousness of Britain’s war to be trumpeted at the commemorations. Quarrels erupted as Conservative politicians accused “left-wing historians” of “belittling true British heroes” by offering critical accounts of Britain’s war.

As the controversy showed, comforting illusions still abound concerning Britain’s role in the crisis of 1914. Many still imagine that Britain’s decision-makers were all decently reluctant to plunge into war, and that they did so only at the last moment. According to the long-lived legend, Britain went to war only for high ideological goals, to face down German authoritarianism and to stand up for democracy. The British government and people, some insist, were instantly united behind a war that was embarked upon essentially to protect Belgium’s neutrality. 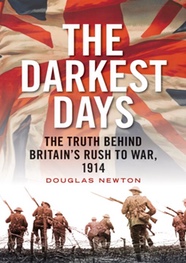 This tale scarcely matches the evidence that I encountered in completing research for my recent book. The private papers of the major players reveal that in 1914 the Cabinet of Britain’s Liberal Prime Minister Herbert Asquith was deeply divided. While the Cabinet’s Radicals struggled to keep Britain focussed upon diplomatic mediation, the inner executive, dominated by Liberal Imperialists, forced the pace, manipulated the Cabinet and parliament toward war, and rushed to a premature choice for war – before Belgium’s invasion. There was intense opposition.

It is hardly realized today that Britain’s decision for war in 1914 was a very close-run thing. Lewis Harcourt, the Colonial Secretary, was the leader of the powerful faction of neutralists inside the nineteen-man Cabinet. His cabinet journal has only recently become available. It reveals that on Monday 27 July, at the beginning of the crisis, Harcourt listed eleven ministers as pledged disciples with him in a “Peace party which if necessary shall break up the Cabinet in the interest of our abstention.”

Let us consider some hard truths about Britain’s role in the crisis.

First, Britain’s decision-makers frogmarched events. They did very little to restrain Russia or France in the course of the crisis. Britain took provocative actions herself, very early. On Sunday 26 July, Winston Churchill (First Lord of the Admiralty), backed by Sir Edward Grey (Foreign Secretary), decided to keep the Fleet concentrated, which encouraged the Russian and French hardliners. On Tuesday 28 July, Churchill ordered the Fleet to War Stations, before news even of a Balkan war. This contrasted with Grey’s own message to others to refrain from all military steps until his mediation had been tried. On Wednesday 29 July the Cabinet decided to authorize the sending of a Warning Telegram across the Empire. Even General Sir Henry Wilson, the Director of Military Operations, wrote in his diary on that day: “I don’t know why we are doing it, because there is nothing moving in Germany.”

Second, the neutralist majority in Asquith’s Cabinet complained bitterly of being “jockeyed” into war. During the week beginning on Monday 27 July, the neutralist Cabinet ministers confronted a series of faits accomplis presented by Churchill, Grey, Asquith and Richard Haldane, a Liberal Imperialist. The early preparatory naval moves noted above, the rebuffing of negotiations with Germany on neutrality (Thursday 30 July), the calling out of the Naval Reserve (very late on Saturday 1 August) the mobilization of the British Army (very late on Sunday 2 August), and the ultimate decision for a declaration of war (very late on Tuesday 4 August), were all decisions taken by the Asquith clique – between Cabinets.

Third, cheerleaders for war were active in London. Influential men, in political and press circles, men linked also with the French and Russian embassies, raised a “pogrom” (their word) to steer the Tory leadership toward advocacy of war. From Friday 31 July, General Wilson linked up with young Tory MPs, journalists from the Northcliffe press, and pro-Entente enthusiasts at the Foreign Office, in shouting for Britain’s instant intervention if war erupted in Europe. This powerful group urged a war of Entente solidarity, in order to safeguard the British Empire, from French and Russian ambition in the future as much as from German ambition in the present.

Fourth, democracy was sidestepped. Asquith and Grey deliberately blindsided the Cabinet and parliament. Parliament learned almost nothing of British policy until Monday 3 August. The leaders fostered the impression that any war for Britain would be naval only. After Grey’s only substantial statement to the Commons, on 3 August, Asquith sought to squash all parliamentary debate. In the end, the Privy Council, just the King and three men, endorsed the declaration of war, as advised by Asquith, deep in the evening of 4 August. Parliament was misled on key aspects of the crisis. For example, on 6 August, the government gave MPs the famous White Paper which contained 159 diplomatic cables bearing upon the crisis; but a dozen of these had been amended to hide Russia’s pressure for war. Effectively “bounced,” the parliament backed war – two days after the declaration.

Five, Britain’s choice for war came before the disaster in Belgium. The choice for war, if war erupted, was made on Sunday 2 August, when the Cabinet authorized Grey to pledge naval assistance to France – two days before the invasion of Belgium. This pledge almost wrecked the Cabinet. So appalled were neutralist ministers at their own government’s haste that four resigned on 2-3 August (Burns, Simon, Morley and Beauchamp). Nowhere else did this happen in Europe. The German invasion of Belgium was unleashed on the morning of Tuesday 4 August. Britain declared war upon Germany later that evening, the very instant her short ultimatum expired. London waited least. In this sense, the German invasion was the occasion of Britain’s intervention – but not the cause. It arrived as a gift from Mars for British politicians and propagandists. It provided political cover for a prior commitment to war. It squeezed Russia, and the invasion of Eastern Europe, out of the national consciousness and made war much easier to sell to the British public.

Six, there was a powerful movement of resistance to Britain embarking upon such a war of Entente solidarity well before, and during the July crisis. In the Cabinet, as in the Liberal Party, the call for neutrality undoubtedly had the support of the majority. Beyond the ranks of Liberals, neutralism was strong among a wide circle of internationalists and socialists. 20,000 people filled Trafalgar Square on Sunday 2 August demanding neutrality and peace. Had a credible active neutral diplomacy been pursued single-mindedly during the crisis, it might have averted war. Most importantly, the defeat of the peace activists in 1914 testifies not to the hopelessness of their cause but to the rapidity of the crisis.