Harry Lembeck (Marietta, GA), a retired attorney, is a freelance writer and a recognized Theodore Roosevelt historian. He is the author of "Taking on Theodore Roosevelt: How One Senator Defied the President on Brownsville and Shook American Politics" (January 2015). He has spoken about Roosevelt at meetings and seminars of historical organizations and acted as a historical advisor for a PBS program on peonage calledSlavery by Another Name.

When as many as twenty never identified men shot up Brownsville, Texas in August 1906, killing a civilian bartender and severely wounding a policeman, black soldiers of the Twenty-fifth Infantry posted at nearby Fort Brown were the prime suspects. Not one of them ever was convicted; none was even brought to trial. Nevertheless, President Theodore Roosevelt, acting alone and with his authority from the Constitution as the army’s commander-in-chief, discharged one hundred sixty-seven of them, practically every enlisted man at Fort Brown, “without honor.” His action lit a blaze that burned brightly then and smolders yet today.

More than one hundred years later, almost no one defends what Roosevelt did, although some of his admirers soften their criticism by calling it an aberration or blunder. At the time of the shooting, few disagreed with Roosevelt’s action. Most believed the shooters were soldiers at Fort Brown, other soldiers knew who they were but refused to finger them, and all of them deserved their punishment. Blunder, injustice, racist act, aberration, or mistake, whatever the Brownsville incident was, that it is seems only to singe Theodore Roosevelt’s legacy at its edges indicates his otherwise overall greatness. 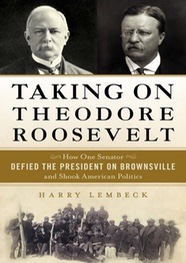 On Monday, November 5, 1906, the day before the midterm elections, President Roosevelt, in a fifty-word letter on White House stationery, directed the War Department to proceed with the discharges. The next day, too late for his action to affect the vote, his order was made public. Four days later, with Secretary of War Secretary William H. Taft away from Washington and unavailable, an unknown functionary named Arthur Murray issued Special Orders No. 266 listing the names of 167 black soldiers to be discharged “and forever debarred from reenlisting in the Army or Navy of the United States ….” That evening, thinking he had dealt with Brownsville and it was behind him, Roosevelt and his wife sailed aboard the battleship Louisiana to Panama to see his cross-isthmus canal being built.

That same day Roosevelt left for Panama, the Military Secretary, General Fred C. Ainsworth sent a telegram to General W. S. McCaskey, the commanding general of the Department of Texas, “Orders will be sent [to you] today directing discharge without honor of all enlisted men of Twenty-Fifth Infantry present at Fort Brown at time of disturbance there.” Because he feared violence when the soldiers learned what would be done with them, Ainsworth marked the wire “confidential” and ordered a battalion from the white Twenty-Sixth Infantry (to be commanded by a “discreet officer”) to keep an eye on them until they were discharged. The whole process had to be expedited and over with quickly. The first step was to disarm them. A few years later Private Boyd Conyers, a young black soldier from rural Georgia, captured the soldiers’ despair, hopelessness, and shuddering fear of the darkness about to descend on them and their families. “When we was to be disarmed the soldiers fell about on their bunks, and it was one of the saddest things I have ever seen in my life. Some of soldiers were crying, their wives too.” He never experienced such sadness in his life.i

While waiting for the end the soldiers kept drilling. Their behavior was, according to the “discreet officer” from the Twenty-Sixth Infantry, nothing less than excellent.ii They remained orderly and well-behaved. None displayed any ugly feeling. Their commanding officer, Major Charles Penrose was with his soldiers to the end, and as they left many came up to him to say good-bye.

Two days before the Thanksgiving holiday, it was over. “Here goes the last of the best disciplined, best behaved, best regulated battalion in the United States Army,” Major Penrose told a reporter for the Washington Herald. “I will add there was but little evidence to convict these brave men.”iii

In Washington, Senator Joseph B. Foraker of Ohio believed Roosevelt’s order was terribly wrong, and he prepared to take him on in the Senate over the discharges. His heroic struggle to reverse what Louis R. Harlan, Booker T. Washington’s biographer, called “the grossest single racial injustice of that so-called Progressive Era,”iv would last until almost the last day of Roosevelt was in office.

Meanwhile, the mysteries of who the Brownsville shooters were and the question of why Theodore Roosevelt treated the black soldiers as he did have gone on for more than a century.