Does the Congress of Vienna Deserve to Be Remembered as a Refuge of Reactionaries? 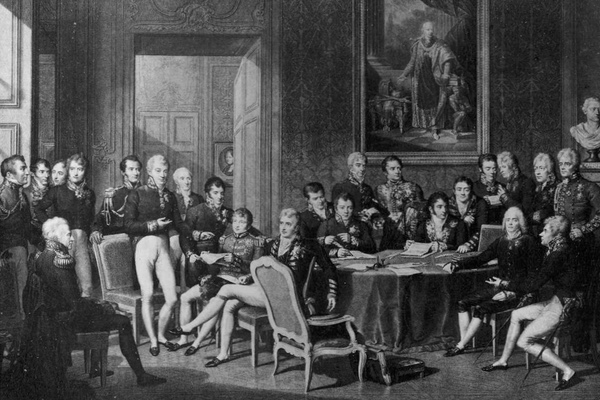 Two hundred years ago the Congress of Vienna was held. It opened in September 1814 and closed in June 1815. It was the biggest diplomatic gathering ever held until then. Its objective was to shape a new international order following the French Revolutionary and Napoleonic Wars that had beset Europe for the previous twenty-two years.

The image of the Congress of Vienna had been tarnished by many historians who had seen it as a reactionary diplomatic exercise aimed at restoring the status quo ante that had prevailed prior to the French Revolution in 1789. Further, the "Dancing Congress," as it had been referred to, was, according to contemporary critics and future historians, nothing but a grand, vacuous, social gathering that failed to address the evolving challenges of nationalism and liberalism.

This view of the Congress of Vienna and the post-Napoleonic settlement was challenged by historians and political scientists such as Edward vose Gulick and Henry Kissinger, among others, who claimed that a balance of power system and a stable order emerged in its wake producing an unprecedented period of relative peace in Europe.

To be sure, the post-Napoleonic settlement was not aimed at restoring the status quo ante. It certainly did not produce a geographical and political map which was identical to that existing prior to the French Revolution. In this context, one should distinguish between setting an objective to go back to the sense of stability that preceded the Revolutionary and Napoleonic Wars and wishing to restore the precise conditions that prevailed then.

Suffice it to look at a map (both geographic and political) of Europe of 1789 and to compare it to a map of 1815 to realize that the latter is quite different from the former. Further, even in France, where the Bourbons were restored to power, a written constitution was introduced limiting somewhat the power of the King and securing political and civic rights unknown before the French Revolution.

To take an analogy from the game of chess, the architects of the post-Napoleonic settlement were intent on playing chess, following pre-determined rules of the game, but they did not revert back to the chess game they were playing when the French Revolution erupted.

Thus, they wanted to restore the diplomatic modus operandi and the underlying political assumptions of the pre-revolutionary era. However, they did not attempt to re-build edifices that could not be restored.

True, territories were exchanged without much regard for the national or ethnic backgrounds of their inhabitants. However objectionable this may seem to us, in the 21st century, it was certainly less so in the early 19th century. The notion of balance of power, which was embraced by the principal statesmen at the Congress of Vienna, entailed the exchange of territories and populations as a compensating factor. The belief was that a satisfied country would be less inclined to question the validity of the settlement thus reached, enhancing the prospect of stability in the international system.

Anachronism is an obstacle that one must overcome in assessing historical events. Whatever their failings, the architects of the post-Napoleonic settlement were intent on securing peace and stability following many years of wars and upheaval, which they all identified with the French Revolution and Napoleon Bonaparte. Thus, to expect them to have embraced the ideas espoused by their enemies, as they saw it, would have been absurd.

To be sure, the Allies were not a monolithic force, espousing the same beliefs. The British, an island with a parliamentary tradition and a constitutional history, were averse to seeing in every revolution the enactment of the French Revolution, as the Continental powers were. The British were certainly less inclined than their Continental allies to consent to armed intervention in order to put down any such revolution. Whereas Austria, Prussia and Russia perceived any revolution occurring anywhere in Europe as a menace to international stability, Britain considered only an attempt at exporting the revolution beyond the borders of the country in which such a revolution took place as a threat warranting intervention.

However imperfect the Vienna settlement may have been, the fact remains that it reflected the basic assumptions of a generation of statesmen and diplomats whose main objective was the creation of a stable international order. Certainly, they were not particularly optimistic about the prospect of peace. The Congress of Vienna Secretary, Friedrich von Gentz, for example, thought that peace was secured for around five years. Viscount Castlereagh, Britain's Foreign Secretary, hoped that peace might last ten years.

There was not to be a major European War for almost a hundred years.