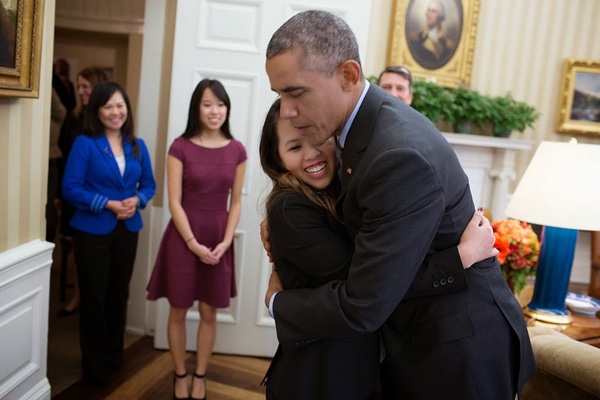 Nina Pham, the first person to be infected with Ebola within the United States, had just been declared disease-free and discharged from the National Institutes of Health. Obama is a rational, science-friendly guy, so he knew she wasn’t any danger to him. It didn’t take courage to hug her.

And yet, another modern president failed a similar test. Facing the greatest public health crisis of his administration, Ronald Reagan was not heroic. He was a dithering coward.

The hateful, homophobic, racist response to the AIDS crisis is one of the most shameful episodes in recent American history. Within a few years after the first AIDS cases were reported in 1981, scientists knew the disease was transmitted primarily by sex, blood transfusions, and shared needles.

That knowledge didn’t stop the prejudice and fear mongering. HIV-positive people were fired from their jobs, forbidden from entering the country, kicked out of the military. Jerry Falwell claimed AIDS was “God’s punishment not just for homosexuals” but for a “society that tolerates homosexuals.” William F. Buckley Jr. wrote in a widely syndicated column that people diagnosed with AIDS should have that fact tattooed on their buttocks. Schools refused to enroll children with HIV. When a judge ordered a Florida school to admit young brothers Ricky, Randy, and Robert Ray, their neighbors burned their house down...