M. Andrew Holowchak is an Assistant Professor of Philosophy at Rider University. 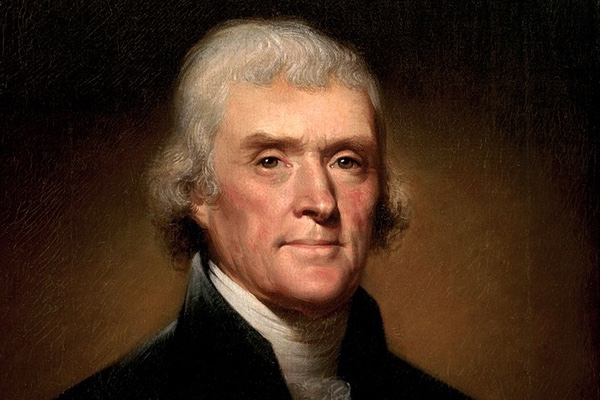 Henry Wiencek’s Master of the Mountain (2012), which depicted Jefferson as a greedy and racist slave-owner, sold well but was given an ambivalent reception. Though the book has been fairly well received by the general public,its author has been censured severely by Jeffersonian scholars who too have written of Jefferson as a greedy, racist slave-owner. Why are the jackals, feasting on the carcass of Thomas Jefferson, turning away from the carcass and toward another jackal? Is not the carcass of Jefferson, a large man even in the eyes of most bashers, large enough for another jackal?

Annette Gordon-Reed lambasted Wiencek, whose motive, she asserted, was unadulterated hatred. “Henry Wiencek is not at all conflicted. He loathes Thomas Jefferson. … His attempted takedown of the man, the third president appears as a demonic figure warped one summer day by a sudden discovery that being a slaveholder could pay.”i She continues:

The book’s tone and presentation betray a journalistic obsession with “the scoop.” Getting the scoop can be the life’s blood of journalism. It does not work so well for writing history, which is not always (or almost ever, really) about discovering things previously unknown. This sensibility leads Wiencek astray in a number of ways. To begin with, it compels him to write as if he had discovered, and was writing about, things that had not been discovered and written about before. In truth, all of the important stories in this book have been told by others.

In short, Wiencek is a recyclers of stories. That is, in some measure, pardonable, for all historians recycle stories, “but Wiencek rarely adds insights to these recycled stories, and when he offers interpretations, they are usually wrong-headed.”

Jan Ellen Lewis is even more severe. “It’s hard to know what to make of this train wreck of a book. Much of what Wiencek presents as ‘new information’ has already been published in the groundbreaking work of Annette Gordon-Reed, Lucia Stanton, and others, while the most headline-grabbing charges crumble under close scrutiny.”ii She continues, “Perhaps Wiencek is so blinded by his loathing of Thomas Jefferson that he cannot see what is right in front of his eyes.” She sums, “Far better books than this have already been written about slavery at Monticello, ones that make you cry instead of guffaw.”

For an independent scholar to generate so much animosity for expressing sentiments that have been expressed equally by others—Jefferson’s hypocrisy, racism, opportunism, greed, and self-preoccupation—is astonishing. Why are they not embracing Wiencek as one of their own, instead of distancing themselves from him?

Jennifer Schuessler, in a piece on the reception of Wiencek’s book, notes, “If there is mud flying, Mr. Wiencek set it off by writing a sensationalistic book that repackages the work of scholars who have spent decades fighting for a full acknowledgment of Jefferson’s entanglement with slavery, only to be painted now as apologists for the man.”iii She quotes Jefferson-basher Paul Finkelman: “I think Thomas Jefferson is one of the most deeply creepy people in American history. But for Henry to come along and say, ‘I am the first one to discover this’? Come on.”

Schuessler writes of the disagreements between Wiencek and Gordon-Reed. “Since his book was published, Mr. Wiencek has been more direct in his claims, asserting that his work ‘systematically demolishes’ Ms. Gordon-Reed’s portrayal of Jefferson as ‘a kindly master’ to black slaves. But Ms. Gordon-Reed, for her part, scoffs at the idea, noting that her books discuss many of the same instances of cruelty at Monticello that Mr. Wiencek cites. ‘That was Jefferson’s image of himself, as a benevolent slaveholder,’ she said. ‘My work shows that’s impossible.’” Thus, Gordon-Reed too thinks of Jefferson as a greedy, racist slave-owner.

So I ask again the questions: Why are the jackals, feasting on the carcass of Thomas Jefferson, turning away from the carcass and toward another jackal? Do not Gordon-Reed and Finkelman hate Jefferson as much as Wiencek? First, Wiencek, an independent scholar, is not a member of the in-crowd of revisionists—e.g., Stanton, Lewis, Gordon-Reed, Burstein, Neiman, and course Onuf—who have set the tone for knocking off Jefferson from his pedastal. When it comes to the in-crowd and the avowed Jefferson-Hemings affair, it is an unwritten and inviolable rule that scholars refer to Gordon-Reed as having the final word. Wiencek has violated that sacred rule—consider Lewis’s comment. What is worse, Gordon-Reed is not even listed in his index,iv and it is a safe bet that the omission is intentional. Second, Wiencek, as on outsider and interloper, is recycling much of what others have said. Saying many of the things, for instance, that Gordon-Reed has said, her name appears seldom in his book. Yet Gordon-Reed is no stranger to failing to give credit to prior authors. Her Thomas Jefferson and Sally Hemings and those parts of The Hemingses of Monticello in which she details the probable course of the relationship between Jefferson and Hemings merely rehash Brodie’s thesis—that Jefferson and Hemings had an on-the-quiet, mutually fulfilling relationship for some 38 years without anyone being wise to them—and yet Gordon-Reed treats Brodie just as one scholar among others in those books.v Thus, Wiencek has not only adopted her ideas, he has adopted her modus agendi—good reasons for her irateness.

There are problems for Jeffersonian revisionists. I focus on two: timelessness and hatred.

As Cushing Strout notes, today’s revisionists write from their present as if it were a “timeless perspective” that cannot be judged faulty from any possible future time.vi They criticize others for failing to situate Jefferson, but in doing so, they fail to situate Jefferson. Consider Peter Onuf’s critique of Jeffersonian republicans. Writing from a “republican” perspective, American historians—and here Onuf seems to have in mind both historians of Jefferson’s day and contemporary historians—have “obscured the cosmopolitanism of the American Revolution.” Ignoring the “British and provincial cast,” he says, “the Americans’ derivativeness, their lack of originality, and their anachronism—manifest in their putatively ‘paranoid’ inability to understand the world they lived in—set them apart as a distinctive, ‘exceptional’ people.”vii He adds:

The ideological historians defined the subject of contemporaneous debate in timeless terms that deflected attention away from the broader geopolitical context and issues that precipitated the imperial crisis, focusing instead on the supposedly fundamental questions—of citizenship and character, liberty and power, private and public interest—that continue to absorb political theorists. With the ‘real’ subject of debate so narrowly defined, it was easy to discount and distinguish other, more cosmopolitan streams of thought. Obsessed as they were with defending themselves against a corrupt and grasping ministry, American patriots would have little interest in reading in thinking about the larger world.viii

In short, ideological historians use a philosophical (“timeless”) and not a situated (“geopolitical”) perspective. Is not Onuf’s own critique situated, and if so, does it not lose much of its bite, so to speak?

What Onuf overpasses is that ideologues such as Jefferson came to grips with “republicanism,” at least initially, by negation.ix As Norman Risjord writes, “It was in this crucible of negativism that the basic tenets of Jeffersonian Democracy were forged—opposition to armies, navies, taxes, and every other form of centralized power.”x For Jefferson, definition by negation occurs in Jefferson’s letters to Edward Carrington (Jan. 16) and James Madison (Jan. 30) in 1787. In each letter, he writes of three sorts of societies. There is society without government, society with a superabundance of government, and society where government represents the will of the people—a mean between the others. Republicanism flees from each of the two extremes. (These letters alone show that the ultraist thesis of Conor Cruise O’Brien—Jefferson was in the grips of a fanatical sort of liberty from 1787 to 1793—is untenable.xi)

Yet perhaps Jeffersonian revisionism is not about objectivity. Peter Onuf, in The Mind of Thomas Jefferson, tells us objectivity is impossible. “Doomed to cluelessness in our own world, like Plato’s cave, [to] a domain of shadows and hand-me-down light” when we study Jefferson,xii we cannot hope for anything more than a possible Jefferson.xiii Stephen Conrad in one of the essays included in Onuf’s Jeffersonian Legacies, writes in an endnote to his essay of a 1992 symposium “Jefferson and Rights” that philosopher Richard Rorty “eloquently made the case for setting aside questions of historical accuracy and philosophical justification in order to sustain the present-day cause of international human rights, a cause that has lately invoked the Jeffersonian tradition to profound effect.”xiv Inclusion of the endnote by Conrad strongly suggests concord with the sentiment.

Moreover, hatred suggests grisly motives. Psychologist Erik Erikson, in his brilliant study of Jefferson, expresses his concern about scholars’ wishing to gain “an easy moral superiority over our dead heroes”:

The worst in us is intimately related to the best, and the most atavistic to the renewal of mankind’s search for a more universal identity. And even as we find what we would nowadays call a rationalized racism in the world image of Jefferson’s time, and a practical as well as intellectual racism in his own writings, it is more important to gain powerful insight into our common evolutionary and developmental corruptibility than an easy moral superiority over our dead heroes. The process of pseudo-speciation [drawing artificial lines about our species while within the species] which has blurred the borderlines between reality and illusion and set man against man in the name of commitments to the death has also produced those more universal civilizations and, with them, the networks of communication on which a wider human consciousness will depend.xv

The sentiments, handsomely expressed, invite critics of Jefferson to look inward—toward their own dark motives for adopting a stance of moral superiority, toward their own hatred.

“Paying attention to great men … is not popular in the historical profession nowadays for political reasons, and Jefferson as a liberal hero has taken shots from both radical and conservative ends of the political spectrum,”xvi writes Strout. There will be large consequences. “What seems most absent from this revisionism is even a modicum of piety for past greatness, and the absence of both piety and greatness from our political culture makes for a deafening historic silence.”xvii

Thus, we can now grasp the disquiet caused by Wiencek’s book. It is the disquiet caused when a jackal, outside of a pack that feeds on a carcass, wishes to join in the feasting. The interloper is unwanted because he was not part of the kill and he is not part of the pack. Leaders of the pack, like Onuf and Gordon-Reed, have the “inalienable” right to assert, “I hated Jefferson first!”

Yet in agreement with Strout, Jefferson, in spite of his foibles, was a great man—a man of Brobdingnagian proportions. The little jackals, when they are overfilled with feasting on the enormous body, will have left the body for future generations as if it has been unmolested. The great body of the great man will remain, but the jackals of tomorrow will know nothing of the jackals of our day.

iv He has six citations for Fawn Brodie.