This Is What We Are Celebrating on Columbus Day. It's Ghastly.

William Loren Katz is the author of "Black Indians: A Hidden Heritage" (Atheneum, 2012) and forty other books. His website is: williamlkatz.com. 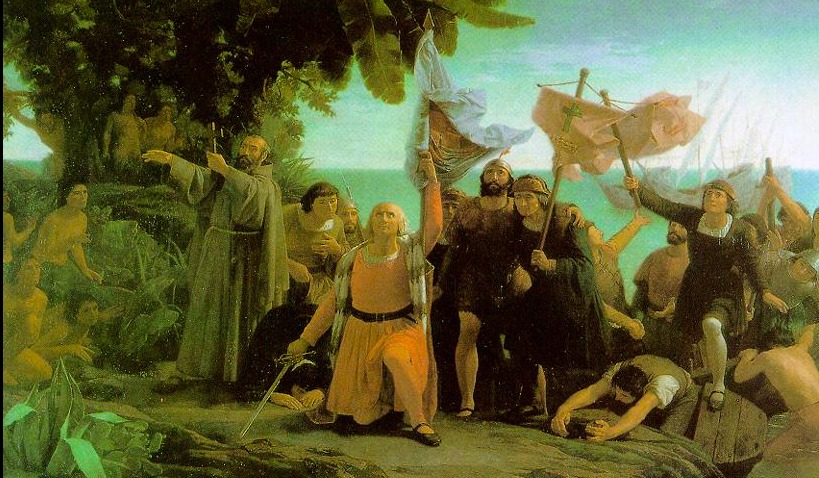 Columbus’s Nina, Pinta and Santa Maria were driven across the Atlantic by the same ill winds that from 1095 to 1272 launched nine European Crusades to capture Muslim Jerusalem. Defeated and humiliated the invaders suffered staggering human losses, left royal treasuries depleted, and convinced Christian leaders to only pay lip service to another try.

Except for Christopher Columbus. Born Christopher Colon this ambitious Genoese craved adventure, was given to religious mysticism to the point he accepted God’s personal command to free the Holy Land. He also saw God’s hand in cloud formations, splashing waves, and distant stars, and had read a religious book that convinced him the world would end in 150 years. He claimed at sea he once saw three mermaids dancing on waves, and was sure in distant lands he would meet men with tails or heads of dogs.

God had chosen him specifically to see Christianity victorious “throughout the universe.” And he would follow His command to convert or destroy Muslims, Jews and other non-believers.

Columbus’s earliest sea experiences were as a youth serving on Portuguese slave-trading ships along Africa’s Atlantic coast. He learned men, women and children could be captured and sold for enormous profits. With enough slaves and gold, even a lowly Columbus could finally end the infidel grip on Holy Land.

Weeks after his 1492 landing in the Americas Columbus thought he had found a large enough supply of gold and slaves to persuade the Christian “Sovereigns within three years [they] would undertake and prepare to go and conquer the Holy Places.” Pope Urban II had launched the first Crusade four hundred years before. Columbus hoped the current Pope would ask him to lead “50 thousand foot soldiers and five thousand horsemen” to march on Jerusalem. He never abandoned this hope.

Columbus’s voyage eastward to seek the riches of Asia has been called the most momentous journey in history. To him it was only first step toward his larger goal. After five weeks in the Atlantic, his food supplies running low and lying to grumbling crewmen he was not a man lost at sea, Columbus stumbled on an island in the Bahamas named Guanahani.  On the morning of October 12, 1492 with a crew in heavy armor bearing swords and muskets, he left the Santa Maria for the sunny shore and a military and nationalist mission. He planted Spain’s flag in the soil, took “possession of the said island for the king and queen,” and renamed it San Salvador. “With fifty men your Highness would hold them all in subjection and do with them all that you could wish,” he wrote in his Diary. The Admiral was applying the new European “doctrine of discovery” that granted its merchant adventurers the right to claim distant lands and their inhabitants. Papal bulls of the time also divided “discovered” lands between Spain and Portugal, and in 1494 the Vatican specifically drew a line dividing the Americas – and the slave trade – between these seafaring powers.

Columbus and his expedition were also a product of Spain’s painful “final solution.” Since 711 Spain’s Muslim Arab rulers shared their cultural wealth with and practiced toleration of the country’s diverse citizenry. Catholics, Jews and Muslims lived peacefully with neighbors, as Spain became a world center of books and learning.

Then Catholic King Ferdinand of Castille and Queen Isabella marshaled an army to impose Christan rule. Castillian soldiers charged into battle with the cry “Santiago Matamoros” or “Kill the Moors.” By January 1492 Christian soldiers stood poised for victory and an era of ethnic cleansing.

On January 2, 1492 Ferdinand’s troops captured the splendid Moorish Alhambra castle, the last Arab power bastion in Grenada. An enthusiastic Columbus stood in the cheering crowd and later recorded the triumphal moment in the first sentence of his Diary. “I saw the Royal banner of your Highness placed on the towers of Alhambra  . . . and I saw the Moorish King come forth and kiss the royal hand of your Highness . . . . “

Spain’s new government quickly moved to finance Columbus’s voyage and against its minorities. On March 31 Spain’s Jews – as integrated into commercial, governmental and cultural life as Christian and Muslim citizens – were handed an Edict of Expulsion. Families were ordered into exile, and one official suggested, “The whole accursed race of Jews, of twenty years and upwards, might be purified by fire.”

The Inquisition forced many Jews to face the ultimate penalty. Even the “marranos,” families who had agreed to convert to Christianity, were not exempt. Can you trust the sincerity of people you forced to convert? Muslims also faced persecution and exile over the next ten years. By 1609 Spain had expelled Muslims it had converted to Christianity. Exiles lost everything but what they could carry.

The wealth that fell from tortured hands helped pay for Columbus’s historic voyage. His final sailing plans were completed when Luis de Santangel, Chancellor to the Royal Household, lent his King the last 17,000 florins – and by this act purchased his family’s right to remain in their homeland.

Some150,000 refugees had trudged to southern seaports as time ran out for the Jews on the very day before Columbus left. On the day he weighed anchor at Palos, a small band of Jewish families huddled at nearby Cadiz waiting for a rescue ship.

The second sentence of Columbus’s Diary shows he was well aware of the connection between their expulsion and his departure. “After having turned all the Jews from your Kingdoms and Lordships . . . your Highness gave orders to me that with a sufficient fleet I should go.” Their forced expulsion and Columbus’s victorious departure were forever linked.

On his first night in the Bahamas, Spain’s “Captain of the Ocean Sea,” described in one Diary sentence how he brought the new Spain to the New World. “I took some of the natives by force.”  The enslavement of American Indians was  Columbus’s first act in the Americas, and his first step toward Jerusalem.

More Spanish troops arrived in the Americas to crush the Aztecs of Mexico, the Incas of Peru and other peoples of the Americas. They brought their iron guns and cannons and a new battle cry – “Santiago Mataindios” or “Kill the Indians.” The world’s largest, longest and most devastating genocide against fifty to a hundred million people had begun. Millions upon millions died of a harsh slavery, forced starvation and mass executions as well as European diseases. Entire villages and cities disappeared.

Along with his sailing skills and fierce ambition, Columbus carried in his heart the burning embers of his Spain’s new intolerance, violence and ravenous greed. Though the Admiral found Caribbean people “tractable, peaceable” and wrote King Ferdinand, “there is not in the world a better nation” –  he concluded they must be “made to work . . . and adopt our ways.”

Oppression built slowly. Columbus’s initial voyage seized a few dozen Native men and women, some as slaves, others to present at the Royal Court. Then his goal was largely exploratory. After his second voyage he wrote to his King, “From here, in the name of the Blessed Trinity, we can send all the slaves that can be sold.” Spain’s rulers eagerly supplied him with 17 ships, a thousand soldiers, priests who would conduct mass conversions, and orders for a brutal colonization. He began an island to island search for gold and slaves that decimated families, villages and cities.

Las Casas, a Dominican Priest, was one of the first Spaniards to denounce his country’s invaders as “ravening wild beasts, wolves, tigers and lions” whose ultimate aim . . . is to acquire gold.” The “only true Christians in the Americans” he stated, were Native Americans.  Indians, he found, had their own name for the Spain’s Christians –“Yares” or devils.

Columbus did not “discover” anything but islands filled with people who greeted him with water, food and gifts. He repaid their generosity with treachery. He introduced two continents and many islands to the most devastating and extended holocaust in human history. As a devout servant of God he relished his work and had no regrets or apologies.

But the Columbus invasion had another hidden side. Tiano and Arawak people women and men with names like Anacoana and Hatuey who once warmly greeted him soon rose against colonial rule and enslavement. On Hispaniola the poet and dancer Anacoana and her husband Coanabo led their people in the first known military uprising and were slain.  A few years later Hatuey and his four hundred followers on Hispaniola left in canoes to warn Cubans of the murderous Christians. He and his forces were finally overwhelmed by superior Spanish forces, but Hatuey was carved into Cuban statues as a great liberation hero.

Other Native Americans soon mobilized their people against the Spanish, French, Portuguese, Dutch and English invaders, their muskets and cannons.

In 1502 –  the age of Columbus, Anacoana and Hatuey –  Native Americans found new allies in the Africans that Europeans began importing as slave laborers. That year Governor Nicolas de Ovando of Hispaniola complained to King Ferdinand that his Africans escaped to Indian villages and “never would be recaptured.” Africans and Native Americans realized they faced the same invaders and slave-catchers, and saw no need to fight alone.

From Canada to Tierra del Fuego and the Caribbean islands, Africans and Indians were able form maroon enclaves in the wilderness that protected families, provided for the common defense and thrived through agricultural and trade. Some lasted for years or even decades, and the Republic of Palmares in Northeastern Brazil with 10,000 people lasted almost a century until 1694. Maroon settlements were the first in America to include Indians and foreigners, and to act on the belief that all, Native American and newcomer, are created equal.

A Native Americans Day can educate young and old about Indians who united with Africans to fight against foreign tyranny before, during and after 1776. It will remind everyone that Native Americans today still seek lands and monies promised in ancient treaties with United States. And it will inform us anew that Americans of color whose ancestors fought and died for the principle of freedom still do not enjoy all their inalienable rights.