Rick Shenkman is the publisher of HNN. 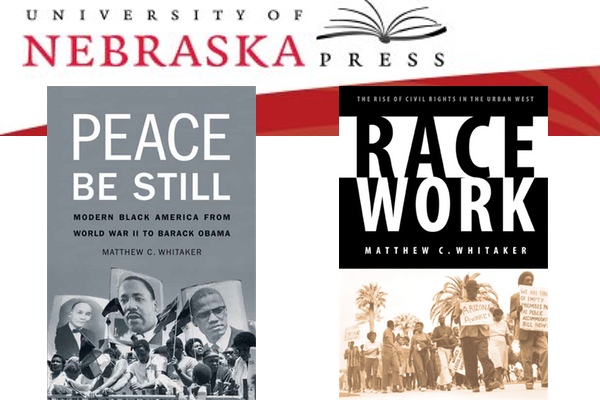 ● Matthew Whitaker, Arizona State University, and the University of Nebraska Press: How Plagiarism is Addressed in the New American Academy By Brian Gratton

When a publisher finds out that not one, but two, books it's published by the same author have come under scrutiny for alleged plagiarism, you might think it would want to investigate the complaints and, if proven true, withdraw the books or correct them.  Taking action is what publishers are supposed to do when plagiarism allegations surface and are corroborated.  This is what Simon & Schuster did when it was demonstrated that multiple passages in Doris Kearns Goodwin's book on the Kennedys had been plagiarized.  Simon & Schuster destroyed its inventory of the book (at Goodwin's request) and published a corrected edition at a cost of about $10,000.  This is what Houghton Mifflin Harcourt did after plagiarism allegations were leveled against Jonah Lehrer in connection with two of his books.  The publisher stopped selling them.

But when plagiarism allegations were made against two books by Arizona State University (ASU) historian Matthew Whitaker, his publisher, the University of Nebraska Press, failed to investigate the charges.  Both books remain on sale.

We wondered why and asked the Press for an explanation in the Spring, when we first began working on this story.  We provided a list of questions:

1.  The University of Nebraska Press has published two books by Matthew Whitaker.  Are you still selling both books?

3.  Are you including an errata notice in either book to indicate that passages were copied out of other sources without credit?

4.  How many copies of each book have you sold?

5.  Have the charges of copying given you pause and made you reconsider your decision to publish either book?

6.  Would you consider publishing more books by Whitaker?

7.  Have you or your editors spoken to Whitaker about the numerous examples of copying that have been reported?  If so, what explanation has he given?

8.  When charges of plagiarism have been leveled at authors of books published by houses like Simon & Schuster, the publisher has launched its own investigation and even gone so far as to pulp existing copies of the flawed books.  Did your press conduct its own investigation of the charges?  If so, can we see a copy of the report?

9.  Why are you still selling these books? (This is an open-ended question, giving you a chance to explain what many people find perplexing.)

In response we received the following email from Donna Shear, the director of the University of Nebraska Press:

Thank you for forwarding your questions. Rather than answer each question separately, let me say the following:

Given the previous allegations made against him, Professor Whitaker took extra care when writing Peace Be Still to ensure that nothing he wrote would be considered plagiarism. To that end, he ran the manuscript through plagiarism detection software twice. In addition, the Press instructed the copy editor to flag anything he (the copy editor) felt might be problematic, and Prof. Whitaker took pains to address those issues. The Press also ran the final manuscript through plagiarism software detection when these allegations surfaced.

As with his other book, no party has come forward to suggest that his or her own work has been plagiarized.  In instances where there is tight paraphrasing, the Press is open to correcting these if the book should go back to press. Both books remain in print. We do not release sales figures.

Should you, or anyone else, find additional information, I’d be happy to respond and discuss with you.

Since this reply seemed unresponsive we asked for an interview.  Four days later we spoke on the phone.  On the call was Donna Shear and Derek Krissoff, the Editor-in-Chief.

Krissoff also said in defense of the Press that Whitaker had been cleared by a board at ASU.  This was sorta true.  An investigation arranged by the university had found he wasn't guilty of plagiarism.  But as Brian Gratton reports elsewhere on HNN, the investigation was deeply flawed.  It had been carried out by people who lacked independence.

Moreover, they hadn't really cleared him.  They'd found evidence of unattributed copying.  University policy is that this constitutes plagiarism, whether it's intentional or not.  But the university decided that because it had been unintentional he wasn't guilty of plagiarism.

But that didn't mean the Nebraska Press was off the hook.  Even if an author doesn't intend to commit plagiarism, plagiarized passages need to be identified and corrected.  The Press, however, never bothered to do this.

"We have not done anything" with regard to Race Work, Shear told us.  Why?  "Because we didn't feel that it's an issue."

We were getting nowhere fast.

We then moved on to Peace Be Still, the more recent book published by Nebraska.  Given the controversy over the earlier book, Shear and Krissoff told us, they wanted to be sure no questions could be raised about the new one.  So they "instructed the copy editor to flag anything he (the copy editor) felt might be problematic,"  as Shear indicated in her earlier email.  Whitaker, for his part, ran the manuscript through two online plagiarism checkers.  But this was all that was done.  It obviously wasn't enough.  When the book was published multiple instances of copying surfaced (see here).  Although this should have set off alarms that their editorial process was flawed, it didn't, though it did prompt the Press to put the manuscript through a plagiarism checker.

Shear insisted that the Press had done all it could do.  And when it was proven that the book included improperly copied passages, the Press had said to "any and everyone" that they wanted to learn about any examples of plagiarism that had been unearthed.

This all sounded like a pretty passive approach.  Instead of launching their own investigation, they relied on others to produce the evidence they professed to want to make this "as good a book as it can be."

"I don't think we're being passive," Shear said with passion. But weren't they?  Despite the book's flaws, it hadn't been withdrawn or repudiated.  Indeed, Shear says the Press stands by the book.

When asked why Nebraska didn't order the existing stock pulped as other publishers have done in similar cases, she explained that in "today's world" publishers don't keep inventory.

This was a little puzzling because the book remains on sale.  You can buy it directly from the Nebraska Press website.  Where are those books coming from if not from inventory?

Shear insisted that when a new edition is published -- the Press plans to issue a new edition -- they'll make the needed corrections.  When asked if an errata sheet might be included in existing copies of the book, she said one wouldn't be supplied.

Krissoff by now was in an angry mood.  He was sure we were sitting on new evidence of plagiarism and apparently worried we were going to spring it on them.  We told him we didn't have any fresh evidence.

What neither he nor Shear seemed to get was that the problem wasn't that there might be something new.  It wasn't fresh evidence of delinquency that they had to worry about.  There was more than enough evidence already in the public record to be alarming.

RESPONSE BY THE UNIVERSITY OF NEBRASKA PRESS TO THIS ARTICLE

"The University of Nebraska Press is in the process of incorporating revisions to Peace Be Still proposed by its author, Matthew Whitaker.  These changes will address the issues of paraphrasing and attribution that have come to light since the book's publication.  Nebraska currently has no inventory for this title, and future printings will reflect the author's revisions."