Ethan Feinstein is an HNN intern. 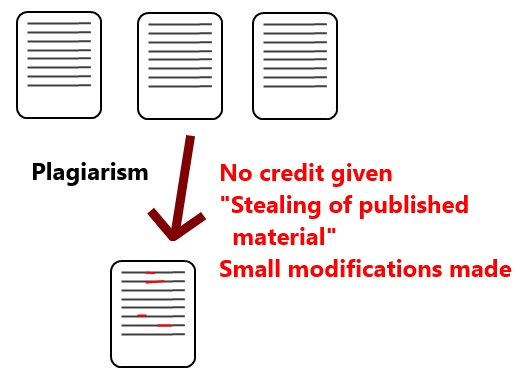 ● Matthew Whitaker, Arizona State University, and the University of Nebraska Press: How Plagiarism is Addressed in the New American Academy By Brian Gratton

For students who get caught plagiarizing, usually only their department, family, and friends learn about the accusation and the final outcome. But when someone’s career is in the public eye, those same accusations threaten their entire reputation. Whether true or false, they immediately jump to explain themselves. While some can navigate past the media attention and come out unscathed, others are not so fortunate. Sometimes the choice to explain oneself does more harm then good. We have heard many times of the accused noting that there was no mal-intent, or how a quotation mark was simply dropped. But sometimes we hear more fascinating reasons. Most notably The Paper came up with one of the wilder excuses for using another writer’s words (see below); perhaps this newspaper, and the many other authors on our list, took T.S. Elliot’s line that “[i]mmature poets imitate; mature poets steal” a bit too literally. These moments, and many others, have been compiled to show the top ten excuses for plagiarism.

1. My Assistant/Student Made a Mistake

In 2013 the New York Times reported that a book by Rabbi Gilles Bernheim, Forty Jewish Meditations, resembled parts of an earlier book, Questioning Judaism. After initially denying any allegation of plagiarism, Bernheim admitted that he received help from one of his students and took responsibility for failed oversight. With this explanation, Bernheim attempted to pass the blame to his students. Bernheim thus became the victim of the plagiarism and stated that he had “been fooled.”

2. The Sheer Volume of My Published Materials Should be Taken into Consideration

In 2002 Stephen Ambrose was accused of plagiarizing parts of The Wild Blue. That was just the start.  As journalists dug into his writings more examples of plagiarism came tumbling out in the weeks and months ahead. Leading the pack was the Weekly Standard.  Then came Forbes, which suggested that multiple passages in Ambrose’s Nothing Like it In the World had been lifted from David Lavender’s The Great Persuader.  But it was Ambrose’s response to the allegations that put him on this list. Ambrose explained that even if some sentences were found to be from other authors without the proper citation, “my books have about 50 footnotes per chapter, or some 1,000 per book, making a total of perhaps 24,000 footnotes. [My critics fail] to mention that I have published hundreds of thousands of sentences.”

Incredibly, around the same time that Ambrose was accused of plagiarism so was historian Doris Kearns Goodwin. On August 4, 2002, the Los Angeles Times reported that it had found dozens of passages from Goodwin’s No Ordinary Time that sounded like another author’s words. This study came months after the Boston Globe reported that Goodwin paid off author Lynne McTaggart after McTaggart discovered that Goodwin, in Fitzgerald and the Kennedys, had copied vast sections of her book without attribution. Later, McTaggart spoke with the Weekly Standard and confirmed that there were a significant number of passages taken from her book. Goodwin’s explanation?  She stated that quotations can essentially take away from the “flow of the narrative,” hurting the experience for the reader, and that the passages worked better without quotation marks. In short, she was saying that in some cases copying is acceptable if the source is credited properly.  (She also blamed the plagiarism on sloppy research practices.)

4. I Heard the Information from Someone Else

Maureen Dowd, one of the journalists who indicted Joe Biden for plagiarism in 1987, herself was accused of the offense in 2009. She allegedly took the words from Josh Marshall of Talking Points Memo for her own rant on torture and Dick Cheney. When the story broke, Dowd explained that she had heard the passage in question from a friend of hers. “Clearly, my friend must have read Josh Marshall without mentioning that to me.”

What do a Kentucky Senator and an Arizona professor have in common, besides being accused of plagiarism? Their responses. In 2013, Senator Rand Paul was accused of stealing lines found in the Wikipedia description of the movie Gattaca. His summary of the movie was lifted nearly word for word from the Wikipedia entry. When asked about this error, his office retorted, “[o]nly in Washington is something this trivial a source for liberal media angst.”

Sometime earlier, Arizona State University history professor Matthew Whittaker was accused of copying passages that turned up in a speech.  In response, according to AZcentral.com, Whittaker sent a letter to ASU saying that “his accusers were ‘out to get me’ and that ‘the question of the motive of my accusers cannot be ignored, including racial bias, resentment and harassment against a black professor promoted to full professor over their objections.” It should be noted that one of his denouncers included an African American history professor. In both of the Rand and the Whitaker cases, the authors denounced their opponents and questioned their motivation. This strategy of redirecting attention changed the focus of the investigation of plagiarism from the accused to the accuser.

6. Play Down Your Importance

Senator John Walsh (D-Montana) recently found himself in trouble when a paper he wrote at the United States Army War College included long passages copied without attribution from other authors. The New York Times reported in late July 2014 that one of the papers Walsh wrote qualifying him for an MA contained passages from an article published by the Carnegie Endowment for International Peace. His excuse downplayed the importance of the offense, implying that he shouldn’t be held to the standards of the academy since “I’m not necessarily an academic.” His initial response to the allegation was that he wrote the paper during a period when he was suffering from post traumatic stress disorder (PTSD). When veterans cried foul, he backtracked.

7. Nothing is Original Anymore

A German writer named Helene Hegemann found surprising success with her first novel. As a finalist in the Leipzig Book Fair, her book Axolotl Roadkill allegedly incorporated many words and phrases from another book, Strobo. When confronted with the possibility that she had been guilty of plagiarism, Hegemann argued quite directly that “[t]here’s no such thing as originality anyway, just authenticity.” She apologized for not being forward with the sources she used, and acknowledged their improper citation.

In October 2011 the Boston Globe, with a discovery from American Bridge, a Democratic Party political action committee, reported that the website of Senator Scott Brown (R-Massachusetts) included an autobiographical section that mirrored passages from a speech given by Elizabeth Dole.  It turned out that there was a reason for this.  They were taken from her website.  Brown’s staff explained that he had used her website as a model for his and that someone had inadvertently included her content on his website. The plagiarism was “the result of a technical error.”

9. Some of the Material in Question was ‘not important’

In 2003 Brian VanDeMark faced accusations brought on by the New York Times that he had plagiarized passages in his book, Pandora’s Keepers. Due to this allegation, the U.S. Naval Academy demoted VanDeMark and later his book was recalled. In 2013, VanDeMark noted that historian Daniel Kevles had “exonerated him” as an accused plagiarizer. Kevles had indicated that “ ‘something like half’ of the allegations were reasonable paraphrases, and the remaining ones were 'not important.' ”

10. Call it an Anthology

When the editor of The Paper, a California newspaper, stood accused of publishing a plagiarized article on its front page, he copped to the charge, but excused it away.  The paper wasn’t guilty of a crime, he argued.  It had simply anthologized other media outlets’ reporting.