This Is What Happened to Gay People in Florida 50 Years Ago. It Should Never Happen Again.

Jonathan Harrison, an HNN Contributing Editor, is an adjunct Professor in Sociology at Florida Gulf Coast University and Hodges University whose PhD was in the field of racism and antisemitism. 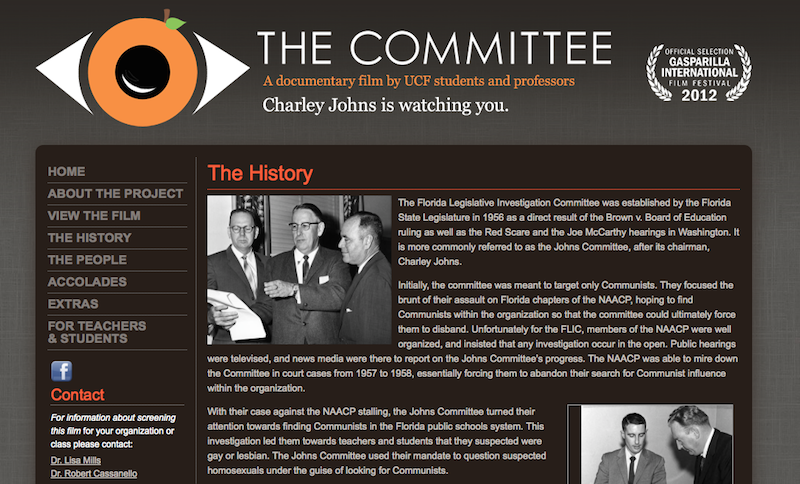 It is only 50 years ago that the state of Florida was hounding lesbians and gays from their jobs in schools and universities. Many of the victims of that witch-hunt such as Merril Mushroom and Chuck Woods are only know to us because they were interviewed in the 1990s and 2000s. Their persecution is distressing on many levels, the most far-reaching of which is the power that the state can hold when it is allowed to harass its citizens for no other reason than their choice of lovers. This power was so pervasive in Florida because an unrepresentative group, The Pork Chop Gang, was able to form a state within a state, known as the Johns Committee (after Charley Johns, a state senator), collaborating with police forces and sympathetic university administrators, such as University of Florida President J. Wayne Reitz, whose dubious career included "purges of gay and leftist employees and students" alongside the fact that his "administration turned away as many as 85 African-American students." Such a "state within a state" is always a possibility in political bureaucracies such as those that operate in our society, so it is necessary to study such past cases in order to warn against a future recurrence.

Lisa Mills and Robert Cassanello have produced a documentary on the Johns Committee, a trailer for which can be seen here:

The Committee had begun its life in 1956 with the intent of using McCarthyist methods to harass the NAACP, but these efforts were in vain, mainly due to the sterling resistance of members of the civil rights community, who achieved a successful intervention against Johns by the Supreme Court in 1959. In that same year, as Allyson A. Beutke discovered for her documentary of 1999, the Committee, "investigators summoned geography professor Sigmund Diettrich to the Manor Motel in Gainesville, Florida. Soon after, he was fired from his job and lost the life he loved at the University of Florida. He attempted suicide the same day he was let go from U.F."

In 1964, the Committee published a hateful screed that became known as The Purple Pamphlet. As with much homophobic literature, the pamphlet, which can be read on-line, ironically seemed to reveal the homoerotic subconscious of its authors, such as in its choice of cover: 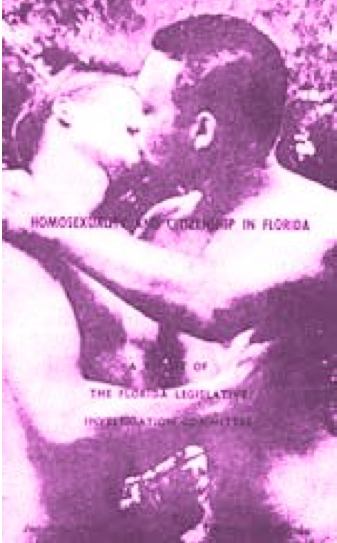 The content would have impressed a propaganda minister in the Third Reich. The section "What to do about homosexuality?" reveals that 64 Florida teachers had had their certificates revoked between 1959 and 1964, and that legislation had been strengthened to ensure more such revocations. Convicted teachers could meanwhile look forward to compulsory psychiatric treatment of the kind that killed Alan Turing in the UK.

The lessons of this period remain potent in 2014, at a time when Texas Republicans are advocating 'reparative therapy' for gay men. Such therapies could be a Trojan Horse for state power over gay peoples' lives. They have no place in the arena of public policy and can only give hope to the homophobes of today who would like to emulate the notorious feats of the Johns Committee which haunt our recent past.