The Sad Reason We Don't Know More About Ebola

Pearl Duncan is completing is completing manuscripts for two books, one about the genealogy, adventures and DNA of her ancient, medieval and colonial African, European and American ancestors, and another about the identity, owner and mystery of the 18th-century century merchant cargo World Trade Center ship. 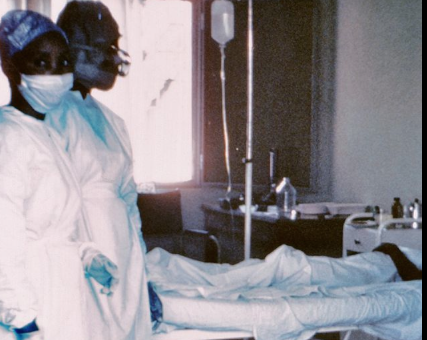 "A 1976 photograph of two nurses standing in front of Mayinga N., a person with Ebola virus disease" (Wiki)

It’s been said that one of the reasons the Ebola virus went out of control, undetected, is because so little attention is paid to Africa. Not only is little attention paid to issues in current Africa, but very little is known about African history, and even less about Africa’s history in relation to health.

I read a profound comment when I was researching my ancestors’ DNA and that comment comes back to me now as I read about the Ebola virus. The comment was made by a geneticist, who said, as I recall, How can modern humans who have been here for 2,000 years presume that they know more about our survival than the modern and ancient humans who have been here for more than 60,000 years?

As I read the current news that one of the first proposed defenses against the sweeping virulent Ebola virus that some African countries have taken is -- the cordon: the cordon sanitaire in French African countries -- cordon sanitary in British African countries, I see how imbalanced all our knowledge of world health history actually is. Other than Stephen Mihm in “Bloomberg View” on Bloomberg News, who quoted historical geographers, and reporter, Laurie Garrett, in the New Republic, reporters could not and did not name earlier historical cordons in Africa. Dr. Scott Gottlieb assesses the crisis in Forbes magazine, explaining the problem as public health agencies’ slow response to the evolving crisis, especially a health crisis in Africa. Bloomberg.com and a few other financial publications followed with articles about the economic impact, large and small, of the Ebola health crisis on the African economy. It seems that business publications are following the crisis more closely than other media.

The reports caught my attention because when my previous literary agent presented my proposal and outline for a book about my ancestors, the history of humans I found by researching world history, genealogy and DNA, a publisher who was interested suggested I “tone done the section on Africa.” I did not. I now have a completed manuscript about a wide range of ancestors, men and women I uncovered on three continents -- in Africa in mid-millennia Ghana, in Europe in medieval Scotland, England and Wales, and in the Americas in British Colonial Jamaica. I even found a few ancestors who were transported to Colonial Virginia and Colonial New York. Why we continue to show more interest in some people of the world than in others is something we must fix.

Health epidemics are wake-up calls about how interconnected we all are. Geneticists say such health and environmental disasters are imprinted on our ancestors’ and our own DNA. Leaders and medical professionals in African countries and around the world are helping in the Ebola crisis because they hope that the cordons are effective lines of defense against the deadly virus. The people inside the cordons – men, women and children in the cordoned regions – simply hope that they are not forgotten, abandoned by the world, and left to die. They hope they get food, water and medical supplies. They hope they get our attention. They hope we know that health cordoning is built into all our ancestors’ and our own DNA. How many people will be cut off and quarantined in cordoned regions we do not as yet know.

But we can learn about cordons of the past, and we should learn about earlier cordons in Africa. Population geneticists such as those who did my African American family’s DNA comparisons in 1999, Dr. Michael Hammer and Dr. Elizabeth Wood, geneticists at the University of Arizona, and geneticists such as Luigi Luca Cavalli-Sforza and other authors of the book, The History and Geography of Human Genes, say, “Results from genetic data should be compared with relevant knowledge from other fields, in particular, paleoanthropology, prehistory, history, the geographic and ecological setting, and the cultural evidence that comes indirectly from linguistic studies.” But how can we compare genetic data when we know so little of the history, and so little about the people, health and culture in certain parts of the world, especially the people of Africa? Geneticists remind us of genetic drifts, how people migrate as small groups of individuals or families, or migrate in large groups. Large group drifts occur more when there is a health, environmental or man-made disaster. The geneticists say the markers in 60,000 years of human DNA indicate mass migrations of our ancestors, in many cases, migrations triggered by environmental and man-made health disasters.

My father, for example, has a rare African genetic marker, because as my historical and genealogical researched showed, cordons were used by our Ghanaian ancestors. My family’s genetic markers note migrations of maternal and paternal ancestors from ancient groups in southern Africa, the Khoisan people in Namibia and Southern Africa to East Africa. Markers also note migrations of East Africans, noted in my maternal DNA as a small group of bottlenecked ancestors, a handful of men and women from an ancient mother, with the genetic haplogroup, L3. This group and their descendants migrated in and out of East Africa into the Middle East, several times. I have markers of East Africans from Kenya’s Kikuyu, the farmers, and Nandi, the runners, migrating into West Africa, and East and Central Africans migrating through West and Northern Africa and eventually settling in Ghana as farmers in the hills of Akuapem.

But what my family also has that is noted in my father’s DNA but not in western history is evidence that in the mid-seventeenth century, the then King of Ghana cordoned a group of soldiers, men noted in my father’s DNA as having been cordoned along the Pra and Upper Volta Rivers. This history is noted in Rev. Carl Reindorf’s, The History of the Gold Coast and Asante, which is a document of African migration. The people were my father’s ancestors, Akan Asante and Fante farmers and soldiers. Reindorf was a descendant of European and African medicinal healers, and like him, we need to know all our history: social, folk, cultural and medical.

History I uncovered about my ancient African ancestors show that at the peak of a malaria outbreak along the rivers in the Ghana-Burkina Faso region, these ancestors were abandoned by the king. They fended for themselves. They used the one thing they had, bush medicine, the wormwood bush from the riverbanks around them, today’s Artemisia absinthium L. They burned the bushes, artemisinin – some survived. How many perished, we do not know. But the survivors developed a partial immunity to malaria in one of the HbS and HbC genes. An immunity in both genes would have resulted in sickle-cell anemia. My ancestors, soldiers, abandoned by a king, were cordoned along the Upper Volta River on the riverbanks bordering Ghana and Burkina Faso. They developed an immunity in one set of genes. Their survival amid a human disaster led to health of a modern kind; these ancestors’ descendants had a partial immunity and a lower rate of malaria than the people around them. Centuries later, once their descendants were transported as slaves to the Americas, their Maroon descendants in Jamaica also burned wormwood, what they called, garden bitters bush, to fend off mosquitoes. Anthropologists and geneticists note that much is not known about the great Bantu migration and others in Africa, or what triggered these migrations. We need to know all our history, especially our lost medical and health history.

Hopefully, and everyone around the world hopes, that as we tackle the Ebola virus, the people in the cordoned regions survive.