A Strange but True Tale of Voter Fraud and Bioterrorism

Scott Keyes is a senior reporter at the Center for American Progress Action Fund. 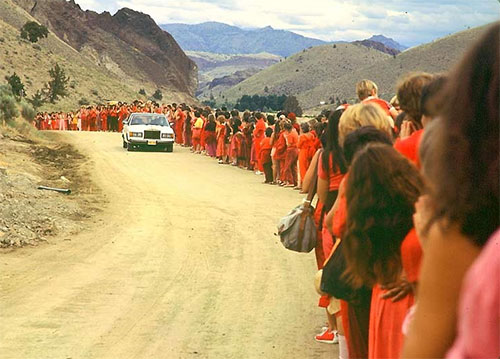 It was the fall of 1984. President Reagan was cruising to reelection over a hapless Walter Mondale, the Cold War was winding down, and in rural Oregon, a small religious sect led by an Indian mystic was busy organizing a massive voter-fraud campaign that nearly enabled it to take over an entire county.

A few years earlier, a guru named Bhagwan Shree Rajneesh and his hundreds of followers had relocated from India to a 64,000-acre ranch in Wasco County, a rural area of approximately 21,000 people an hour east of Portland. As might to be expected, there were problems with the locals.

Rajneesh’s immediate concern was building more houses to accommodate his growing number of followers, known as Rajneeshees. But doing so would require construction permits that county officials—who were less than thrilled about the sect unexpectedly showing up in their backyard and who worried about its growing power—were reluctant to grant.

Their reluctance was vindicated in 1982 when enough Rajneeshees voted in nearby Antelope’s (population: 50) local elections to win a majority of its city-council seats. Soon thereafter, the new council members renamed the town “Rajneesh,” raised property taxes to extract money from the few remaining local residents, and passed other bizarre initiatives, including renaming the local recycling center the Adolf Hitler Recycling Center.

Tensions remained high between the Rajneeshees and the Wasco County Commission throughout 1983 and 1984, with the two sides repeatedly at loggerheads over the sect’s expansion efforts. Finally, in the summer of 1984, the Rajneeshees decided that the only way to obtain the building permits they needed was to take over Wasco County in November’s election...

Read entire article at The Atlantic
comments powered by Disqus