FROM OUR ARCHIVES Is George H. W. Bush the Best One-Term President Ever?

by Aaron Brown and Mirco Reimer

Aaron Brown is a PhD candidate at Ohio University, studying US history and foreign relations. Mirco Reimer is a graduate student in American Studies at the University of Southern Denmark, studying American foreign policy and transatlantic relations. This article was first published on the website of UNC's American Diplomacy. 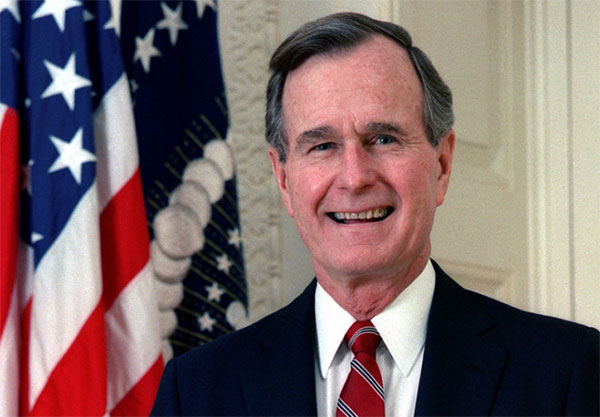 Related Link How George H. W. Bush Is Being Remembered

While Jeb Bush seems to be the hottest name in (Republican) town and George W. Bush attracts media headlines with his paintings of animals and foreign leaders, George H. W. Bush – America's 41st president - almost seems to have been forgotten. Recently, however, the limelight has shifted and more than two decades after leaving the White House and twenty-five years after his inauguration, the spotlight is back on George Herbert Walker Bush. Benefiting from a wave of historical revisionism, America's 41st president, once largely portrayed as the biggest incumbent loser since William Howard Taft, is today portrayed as the most popular former president of the past half century, according to Gallup polls.

“History is beginning to recognize that George Bush was the best one-term president in American history,” James Baker, the former secretary of state and a friend of Bush the Elder, recently told the New York Times. While much of Bush the Elders rehabilitation previously seems to have been the result of the former president's pleasant personality and personal decency - and, obviously, his funny socks – American academics and journalists are now also starting to reassess the 41st's presidency.

While his son George W. Bush brought the U.S. a quagmire in Iraq and Barack Obama has to deal with a resurgent Russia and transatlantic tensions, George H. W. Bush's foreign policy stands out as the gold standard of American leadership. Facing one of the most complex and overlapping global evolutions since Franklin D. Roosevelt at the height of World War II, Bush the Elder's administration guided America well through years of global upheaval. Therefore, the presidents' stellar leadership in historic times of upheaval can serve as a role model for future and current American presidents. Any American president would be well advised to ask himself or herself: “What would George Bush Sr. do?”

The collapse of the Soviet Union and the end of the Cold War was the most transformative event of the late 20th century. George H. W. Bush played a decisive role in these developments. The 41st president faced a dramatically changing world, as the Cold War ended, the Communist empire broke up, and the Berlin Wall fell. By trying to engage Soviet leader Mikhail Gorbachev and then pursuing to integrate the new Russia into a new world order, the stakes for Bush the Elder were high. His game plan was controversial and his opponents thought the president was naïve, but in the end, Bush succeeded. The president brought France and Britain around on the issue of German reunification while simultaneously blocking Soviet/Russian attempts to keep Germany out of the western alliance.

It is worth to remember that the main reason the end of the Cold War was such an extraordinary event was that although a great power - the Soviet Union - had committed suicide, the transition was largely peaceful. Historically, great powers never "die in bed”. Rather, they tend to unleash a major war before they breathe their last breath as did Hitler's Nazi Germany, Austria-Hungary, and the Ottoman Empire. Under Bush, however, a great power actually died in bed. Under the most treacherous of circumstances, the Bush administration kept calm and delivered a superb performance. As Stanford's Josef Joffe has noted, Bush's diplomacy stands as one of the greatest moments in the history of American statecraft.

The successful German transition and German unification is barely discussed today – since the focus seems to be on Germany's new strong role in Europe and within the European Union. In addition, German reunification is today often viewed as the natural result of the collapse of the German Democratic Republic (DDR), but it is important to highlight that events, of course, could have evolved differently. Had Bush overplayed his hand, as Lyndon B. Johnson did concerning Vietnam, Bush could easily have undercut Gorbachev's support back home, potentially triggering a backlash for Germany and the entire continent. George H. W. Bush's leadership during this time might have lacked Reagan's inspirational flourishes but it was compensated by the presidents' steady diplomatic hand. Bush recognized that true leadership sometimes meant doing less, not more. While these outcomes may appear inevitable from today's perspective, they could very well have turned out differently had another person occupied the White House.

Ending the Cold War in Iraq and Panama

Bush's realist foreign policy extended beyond Europe as well. While taking great pains not to “rub salt into the Soviet Union's wounds,” the president was also aware that the United States needed to maintain its ability to influence world events. The U.S., still reeling in some ways from the Vietnam debacle of the 1960s and 70s, would refrain from committing its military to lengthy campaigns abroad. But it would take decisive, swift action against regimes it viewed as a threat to world peace.

When dictator, drug trafficker, and former CIA asset Manuel Noriega assumed control of Panama in the mid-1980s, he was a useful partner in Reagan's fight against communists in El Salvador and Nicaragua. But as the Cold War ground to a halt, Noriega became less of an ally and more of an embarrassment, particularly after allegations of money laundering and drug dealing on behalf of a brutal Colombian drug cartel surfaced. Once it became apparent that Noriega would use force to maintain his grip on power (he sent gangs of thugs into the streets of Panama City to beat up his opponents), the Bush administration decided that the Panamanian strongman should not have control over the prized Panama Canal and that his ouster was imperative. When reports surfaced in late 1989 that Americans living in Panama were being harassed by Noriega's supporters, Bush decided to send in 28,000 troops to arrest the leader. Dubbed Operation Just Cause, the largest U.S. military intervention since the Vietnam War was largely a success (only 23 American troops lost their lives). Noriega remains in prison to this day.

Another foreign policy challenge arose in the summer of 1990 when Iraqi dictator Saddam Hussein invaded his neighbor Kuwait, effectively gaining control of 21 percent of the world's oil supply. Saddam had long resented Kuwait for its oil wealth and leveled accusations that it was stealing Iraqi oil through “slant drilling.” After a devastating war with neighbor Iran, Iraq was at its weakest point in years. Saddam, believing that such a maneuver would go unchallenged, decided to turn tiny Kuwait into the “19th province of Iraq.” The Bush administration and its allies, an international coalition of 35 countries, responded to this blatant violation of international law with Operation Desert Shield. The alliance successfully ejected Saddam from Kuwait, and suffered few casualties in the process.

Though most of the world supported Bush's wars, the interventions in Panama and Kuwait did not go unchallenged. Human rights activists decried the punishing levels of violence unleashed on unsuspecting civilians in Panama City and Iraqi capital Baghdad as a result of the invasions. But more noticeable was the lack of condemnation from one longtime American foe – Moscow. In fact, the Soviet Union even supported the American-led effort to contain Saddam. Some scholars have argued that the Soviets' silence during the invasion of Panama and the war against Saddam signaled the end of the Cold War. This is debatable, of course, but it appeared that Bush's skillful diplomacy in Europe was paying off elsewhere.

Bush steps out of Reagan's Shadow

The historical revisionism concerning Bush the Elder's presidency is, to some degree, a function of the perspective that comes with the passage of time. More than twenty years after leaving office, Bush seems no longer to stand in the shadow of Ronald Reagan, and Americans – tired of being on a constant war footing - increasingly seem to appreciate Bush's competence as president during a consequential time.

To be sure, George H. W. Bush was never a president who could speak to people's hopes and dreams like John F. Kennedy, for example. He did not have “the vision thing”, as then vice-president himself had quipped in January 1987 in an issue of Time magazine. Maybe, George H. W. Bush failed to articulate his policy positions in a compelling and coherent manner. But the 41st president was a pragmatist, a result-oriented man who was grounded in the realities of the world. Rather than operating from a standpoint of how the world ought to be, he looked at the world as it was. As Joseph S. Nye JR, professor at Harvard University, put in his most recent book, Presidential Leadership and the Creation of the America Era:

“While transformational presidents like Woodrow Wilson and Ronald Reagan changed how Americans see the world, transactional presidents like Dwight Eisenhower and George H.W. Bush were sometimes more effective and more ethical…Bush was not transformational in his objectives or inspirational in his style, but he presided successfully over a major structural transformation from a bipolar to a unipolar world. If any of the balls that Bush was juggling had been dropped, the consequences could have been disastrous.”

In times of increasing political polarization, gridlock and a toxic political climate in Washington, George H. W. Bush, therefore, stands out as one of a kind: The last of a dying breed, the last true American statesman. While Bush was one of the most qualified candidates ever to assume the office of president of the United States, he ultimately - for a number of reasons - failed to convince the American public to give him another term in office. Consequently, he has been labelled an average president, and the most common evaluation of his presidency is that he failed domestically but did well in foreign policy. As keen observers of American politics know domestic issues tend to trump foreign policy – a phenomenon Bush experienced in the 1992 election when, in the minds of the American electorate, his foreign policy achievements were not good enough to overshadow domestic issues and an economic recession.

“I'd rather be a really good one-term president than a mediocre two-term president,” Barack Obama said, well before his 2012 re-election. Maybe this assessment should be applied to Bush the Elder too. In a time when Americans mostly have had foreign policy rookies sitting in the White House, it is worth looking back at a president who was well-served by his experience in World War II, being a U.S. envoy to the United Nations, U.S. ambassador to China, CIA director, and Ronald Reagan's vice president for eight years. As the National Interest has noted: “The perilous situation unfolding in Ukraine under President Obama and the debacle in Iraq unleashed by the younger George Bush should nevertheless remind us that prudent statesmanship is easy to take for granted.”

Speaking to Time's Jon Meacham about his legacy, Bush observed: “I think there's been a certain revisionism…I'm surprised people remember because I feel like I've gone away, out of the game, all that kind of stuff. I haven't been particularly interested in the legacy thing, except hoping that historians get it right, which I think they will.”

The passage of time is essential in formulating a true understanding of any presidency. Obviously, the historical assessment of Bush's presidency and legacy is still evolving. Only after partisan battles have cooled and a policy legacy is fully matured, a balanced assessment can be made. The same is the case regarding the 41st presidents' place in history. As it happens, history seems not yet to be done with George H. W. Bush. Neither should we.