The Evangelical Renaissance Is Over

Steven P. Miller, Ph.D., is the author of The Age of Evangelicalism: America’s Born-Again Years (Oxford University Press, April 2014). His first book was Billy Graham and the Rise of the Republican South (University of Pennsylvania Press, 2009). Miller lives in St. Louis, where he teaches History at Webster University and Washington University. 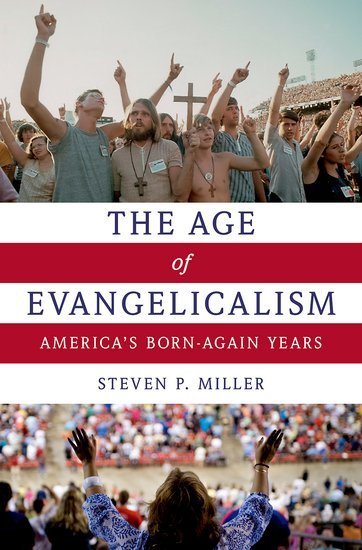 In 1976, pollster George Gallup, Jr., famously announced the “Year of the Evangelical.” Jimmy Carter, a self-described born-again Christian, was on his way to the White House. Soon, Larry Flynt and Bob Dylan would join the evangelical club, too, however fleetingly.

The narrative of evangelical relevance far outlasted those celebrity conversions. In a 2003 analysis of American religion, scholar Alan Wolfe considered “a sense in which we are all evangelicals now.”

The age that led to such declarations may well be passing, but we are still living in its shadow (and by “we” I mean not just the 20 to 30 percent of the population that might be described as evangelical Christians, but also the rest of us).

As the political and cultural sway of evangelicalism declines, this is a good time to take stock of the born-again side of our recent past.

The story of evangelicalism’s place in recent America is one of unacknowledged recurrence. Its connecting threads often go unnoticed. Before Duck Dynasty, there was Tim Tebow. Before him, there were Jim and Tammy Faye Bakker. Before them came Marabel Morgan, author of the 1973 best-selling marriage guide for wives, The Total Woman.

A similar cycle occurred in the political arena, which (fairly or not) shaped popular impressions of American evangelicalism more than megachurches or The Purpose Driven Life. One can thank Jerry Falwell for this. Yet without a Carter to oppose, Falwell never would have received so much air time. The political turn in modern American evangelicalism was a bipartisan phenomenon, as the electoral strategies of Barack Obama and, before him, Bill Clinton, demonstrated. Each protected his right flank by cultivating ties with progressive evangelicals, such as Tony Campolo or Jim Wallis.

Clearly, the evangelical moment in recent American history was not a mere episode. Yet public awareness of it has been downright episodic, surging and ceasing with the fortunes of the Christian Right. Ten years ago, when George W. Bush sought a second term, coverage of evangelicalism was alternately triumphalist and alarmist. Influence was assumed. The same was true in 1980. To judge from the initial verdicts that election year, Falwell single-handedly delivered the presidency to Ronald Reagan.

The post-1970 evangelical renaissance amounted to much more than celebrity believers and the Christian Right, however. Without the prominence of evangelicalism, it is difficult to explain why Habitat for Humanity and other “faith-based” organizations became so popular. More strikingly, with evangelicalism removed from the equation, it is nearly impossible to understand why the concept of the “culture wars” had such resonance.

Since the 1970s, the words “evangelical” and “born again” have been weapons, foils, or badges of honor, depending on their wielders. The entry of evangelicalism as a named force in politics changed what it meant to be a conservative or a liberal. The high profile of evangelical religion thrust previously esoteric terms like “civil society” and “fundamentalism” into the spotlight.

Nearly four decades after the “Year of the Evangelical,” the old-time religion no longer looks like the wave of the future. The spectacle quality of poplar American evangelicalism has lost its novelty. Every few months or so, we hear a story about, say, the Duck Dynasty patriarch’s preference for heterosexuality, or Mike Huckabee’s spin on big government and birth control. These stories are background noise.

As a social lightening rod, then, evangelicalism now produces fewer sparks that it did just a few years ago. If current trends continue, the growing group of religiously unaffiliated “nones” will become the new born agains. Because evangelicalism has so often functioned as a stand-in for religion as a whole, it has made us more conscious of the limits of secularization. Going forward, that same misleading interchangeability might make us more aware of the limits of religious identity, too.

So, are the years of the evangelicals over? In many states with a Republican electoral majority, it sure does not appear that way. As long as the GOP is the party of social conservatism, the evangelical right is not a spent force. As long as politicians hesitate to describe Christianity as anything other than a distinctively positive good, the born-again imprint on public life endures.

In manifold ways, evangelicalism shaped the course of recent American history. Maybe we were all evangelicals, then.