Review of Sherry L. Smith's "Hippies, Indians, and the Fight for Red Power" 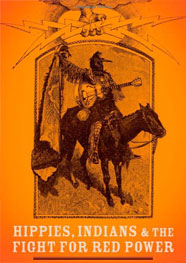 In Hippies, Indians, and the Fight for Red Power, Sherry L. Smith, Distinguished Professor of History and Associate Director of the Clements Center for Southwest Studies at Southern Methodist University, takes the counterculture of the United States in the 1960s and 1970s quite seriously. Rather than simply focusing upon the excesses of the movement which degenerated into the Rolling Stones Altamont concert and the bloody murders of the Manson family, Smith chooses to emphasize the positive legacy of the counterculture’s interest in Native American history and culture. Although she acknowledges that the hippie fascination with Native people could be superficial and condescending, in addition to not always being welcomed or reciprocated, Smith concludes the counterculture’s appreciation for the Native American alternative to mainstream capitalist culture culminated in support for tribal self-determination and treaty rights. Drawing upon interviews with former activists such as historian Richard White and Whole Earth Catalog publisher Stewart Brand, along with extensive reading of counterculture underground newspapers, Smith explores the alliance between Native Americans and non-Indians forged during the 1960s that culminated in the American Indian Movement’s (AIM) 1973 occupation of Wounded Knee.

Smith is careful to assert that Native people assumed the pivotal role in their political struggle for self-determination against federal termination policies, but she argues that the financial contributions and attention garnered by non-Indians provided essential support for the recognition of treaty rights and tribal power. Smith writes, “But whatever the strategies and tactics, given Native Americans’ relative demographic insignificance, they all realized they could not do it alone. Non-Indians had to be reckoned with, educated, and enlisted. In short, the support and even active participation of sympathetic non-Indian people proved essential to any possible reform. The latter’s willingness to listen and respond positively to Native American demands for justice was a necessary, even crucial step toward the restoration of Indian power in this country”(15).

Smith begins her study with the efforts of Hank Adams, a Sioux-Assiniboine who grew up on Washington’s Quinault Reservation, to restore treaty-assigned fishing rights for the Northwest tribes. Establishing a camp at Frank’s Landing on the Nisqually River, Native people defied the state’s ban on tribal fishing rights. Crucial in gaining publicity for the cause was the recruiting of celebrities such as actor Marlon Brando. While conceding that celebrities such as Brando or Jane Fonda were sometimes naïve, Smith does not doubt their sincerity. However, the support of some more radical whites who failed to respect Indian customs was more problematic in the Pacific Northwest and elsewhere. In addition, Smith argues that church groups in the 1960s were important supporters of the tribes. The American Friends Service Committee (AFSC), for example, published the influential Uncommon Controversy and provided assistance to the legal actions which culminated in United States v. Washington (1974) that recognized treaty fishing rights in the Northwest.

Meanwhile in California, Smith asserts that counterculture artists and writers such as Ken Kesey, Stewart Brand, Peter Coyote, and Gary Snyder drew inspiration from Native culture; allowing young people to recognize that Indians were not simply historical relics, but a contemporary culture fighting for its life. Smith comments, “Out of the dominant society, which for so long had tried to extinguish Indian cultures, emerged children of privilege who completely reversed that impulse. Indianness was cool, something to be valued, preserved, and perpetuated” (49). This emerging counterculture attitude toward Native people in California and the San Francisco area resulted in considerable community assistance for AIM’s 1969 occupation of Alcatraz Island. Although in the final analysis, AIM was unable to sustain the occupation, Smith argues that the confrontational approach of AIM borrowed from more radical non-Indians and garnered considerable support for the plight of Native people; encouraging similar protest around the country.

Interest in Native culture also fostered a back to the land movement in Taos, New Mexico. While the hippies sometimes antagonized the indigenous people of New Mexico, Smith observes that the attention given to Native issues in the area did result in the return of the sacred Blue Lake Lands to the Taos Pueblo; providing an opportunity for the Nixon administration to appease Indian rights activists. Consciousness of Indian issues and cultures was also furthered by national best-selling books such as Dee Brown’s Bury My Heart at Wounded Knee and Vine Deloria Jr.’s Custer Died for Your Sins. While Smith praises Brown for calling attention to a national history of exploiting Native Americans, she points out Deloria deserves credit for emphasizing the plight of contemporary Indians who were more than a relic of the past.

Smith concludes her book by examining the 1972 Trail of Broken Treaties demonstration in Washington, resulting in the occupation of the Bureau of Indian Affairs, and the 1973 confrontation at Wounded Knee. While the occupation of the Bureau of Indian Affairs culminated in considerable property damage, Smith argues that this did not limit national support for the Indian activists—including significant aid from church groups and a sometimes strained alliance with African-American civil rights organizations. Criticized by conservatives for not taking a stronger stance against the Trail of Broken Treaties protest, the Nixon administration responded to AIM’s occupation of Wounded Knee with military force. Nevertheless, Smith argues that AIM received considerable sympathy from non-Indian sources such as progressive churches, celebrities, leftist organizations, liberal attorneys, African Americans and Chicanos, college students, and hippies; penetrating the national consciousness more than any other Indian protest. The massive force employed by the Nixon administration eventually broke the siege at Wounded Knee, but Smith cautions that we must carefully distinguish between short and long term results. Smith concludes, “In the aftermath of the most contentious years of protests and demonstrations, the United States Congress and courts acquiesced to Indian demands for more power over their lives and resources” (217). She acknowledges that much more needs to be done, while non-Indians must continue to listen and learn from Indians and tribal leaders.

In recognizing the positive side to Stewart Brand’s hippie slogan that “America needs Indians,” Smith argues that the counterculture, despite its excesses and naiveté, provided key assistance, consciousness-raising, and a foundation for the promotion of tribal rights by non-Indians in the 1960s and into the twenty-first century. Smith’s book fits into a charge made by David Farber at the 2014 meeting of the Organization of American Historians that scholars of the counterculture must move beyond clichés and examine the legacy of the counterculture in pioneering new approaches to entrepreneurship, technology, environmentalism, consumerism, food production, and political alliances—moving beyond the stereotypes of Woodstock and Altamont.