Juliana Maio was born in Egypt but expelled from the country with her family during the Suez Crisis. She was raised in France and completed her higher education in the United States, receiving her B.A. from the University of California, Berkeley, and her Juris Doctor degree from UC Hastings. 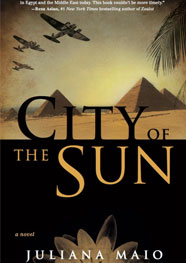 I was born in Egypt, but when I was three years old life as I knew it came to an end with the 1956 Suez Canal Crisis. My family was Jewish. They'd been there for a couple of generations, but suddenly we Jews became the enemy and my family was among the first to be expelled. They gave us one week to leave and we were only allowed to take a few suitcases, and maybe $50 in our pocket, if that. Though she'd never been out of Egypt, my mother held a French passport so we left everyone and everything behind and took refuge in Paris where we had no support system whatsoever.  At the time, my mother was pregnant with her third child, but as soon as my sister was born she went off to work and bundled me and my brother off to a French boarding school.

I was in boarding school from the age of four to the age of twelve. Until I became a young adult, my life was very uncertain and chaotic. Twice, my family moved to the United States: the first time when I was seven and then again when I was fifteen. We ended up staying just a few months each time because my parents did not feel comfortable there.  Nevertheless, America was the Promised Land, and when I was 17, we moved to San Diego permanently.

I spoke practically no English, but five years later, I started law school and went on to build my life. And when people asked me where I was from, to me, it was very simple:  I was from France. I was French. Yes, I understand some Arabic, but French was my native language. I came of age in France. I was educated in France. All my friends were French. And I hate to admit it, but deep down, I wanted to distance myself from my family and their Arabic origins. To me, Arabs were emotional, superstitious, dramatic, and not nearly as open minded as the French, who I found poised and rational.

But a funny thing happened – once I felt secure in my career, I had a husband, and a child – something deep inside of me started itching to delve back into my family's roots and to try to understand them. Who were those Jews in Egypt? What were they doing there?

I started reading and immersing myself in the research and I was blown away by what I discovered. It was as if I had stumbled upon a secret treasure – a treasure that had been buried for decades.  And I had to write about it.

Of course, Jews had been living in Egypt since biblical times, but the largest wave of immigration came in the middle of the 19th century, when the country underwent a massive modernization and the Suez Canal was built. Jews came from all over the Mediterranean basin. That's when my family arrived. The Jews in Egypt were doctors, lawyers, legislators, bankers, athletes, and movie stars. They built the greatest department stores. They built hospitals and they helped write the Egyptian Constitution.  Until the advent of WWII, Egyptian Jews were pretty much on top of their game; they were thriving.

And they were not the only successful minority in Egypt. In fact, with that wave of immigration in the 19th century came large communities of Italians, Belgians, French, Armenians, Greeks, Syrians, Turks, even English came to settle in Egypt.  It made for a very unique Levantine society and what was so beautiful was that all these minorities co-existed in harmony with one another and with the Arabs, each retaining their own traditions and languages. Each respecting one another's religion and values.  It was an incredibly tolerant and pluralistic society until 1956, the year of the Suez Crisis, which marks the beginning of the exodus of not only the Jews, but also of all those other foreign communities.

For almost a hundred years, there was a golden age in Egypt, and Cairo evolved into an incredibly cosmopolitan city with grand boulevards and exquisite gardens, cinemas, dance halls, and sports clubs. And a magnificent opera house. Imagine all of that! All of that, right in the heart of the Arab world, juxtaposed with ancient minarets, domes, and old churches.

So, I wanted to write about this vibrant, pluralistic and incredibly exotic world. I decided to write a novel set in 1941 during World War II when hordes of refugees, soldiers and spies from all over streamed into Cairo. This was a pivotal time, not only with regard to the war – had the English lost Egypt to the Germans, they might have in all likelihood lost the war because of the Suez Canal’s vitally strategic location. But this time period was also pivotal for relations between westerners and Arabs. The English, who had colonized Egypt, had too much at stake there and even though the country had won its independence, the British refused to leave.  During the war they held Egypt with an iron grip, humiliating it and creating so much distrust that there was no going back.  So much of the chaos and conflicts now in Egypt and throughout the entire Middle East have their roots in this period.

It took me a while – a very long while – to put my arms around this world and all that was going on during the war and in the various strata of society. But I discovered such a crazy interesting cast of real historical characters that it made the 13-year journey of writing this book really fun and thoroughly fascinating.  I've injected many of these historical characters into my novel and made them interact with my fictional characters.

For instance, there was the 6'5'' British ambassador to Cairo, Sir Miles Lampson, who was truly the ruler of Egypt, as well as the symbol of British imperialism.  He managed to seriously alienate the whole country with dire future consequences.  He drove young army officers, like Abdel Nasser and Anwar Sadat to collaborate with the Germans.  Of course both Nasser and Sadat later became presidents, and except for a very brief period, the army remains in control of the country. Another important character is Hassan Al Banna, the founder of the Muslim Brotherhood, who sided with Hitler and spread anti-Semitism in Egypt. The organization is the father of Al Qaeda, Hezbollah and Hamas. And it still haunts this nation.

Young King Farouk also graces the story. At the time he was 20 years old and absolutely dashing. He was a total playboy whose favorite mistress happened to be a Jewish girl. He was also completely intimidated by the British ambassador, and was ultimately overthrown by the military for being an English puppet.

I also included Bill Donovan, the great American patriot, who convinced Roosevelt that America needed an independent intelligence agency. He was the director of that first agency, the COI, which became the OSS, otherwise known as today’s CIA.

I titled my book City of the Sun, which translates to “Heliopolis,” a suburb in Cairo.   City of the Sun tells the story of Mickey Connolly, an American journalist who goes to Cairo to write about the war, when he gets unexpectedly recruited by the American embassy to find a European refugee nuclear scientist hiding within Cairo's flourishing Jewish community. America wants him for the Manhattan Project. Unbeknownst to everybody, there is a Nazi spy who is also racing to find that same Jewish scientist. And of course, there is a love story. A young woman refugee, who is not who she says she is, crosses paths with Mickey.

I found myself writing about such important and relevant historical phenomena: colonialism, Zionism, Arab nationalism, fundamentalism, the birth of American intelligence, the emergence of America as the leader of the world.  It was all so captivating and I became obsessed.

But the most important thing is that I discovered my roots and came to terms with the fact that part of me is culturally Arabic. And I'm so proud of it.  My people were such warm, hospitable, generous, alive people.  And a lot of it came from their assimilation into Arabic culture. Yes, they were emotional and never on time, but who cares?! Their gift of love was so large.  And more than anything, it's important to me to tell the world about this beautiful colorful community that's been completely extinguished.