Russia and America Were Once BFFs -- Why Not Again?

Jane Hampton Cook is the author of American Phoenix, featuring the story of John Quincy and Louisa Adams’s “honorable exile” to Russia during the War of 1812. A former White House webmaster, Jane earned a fellowship from the White House Historical Association and the Organization of American Historians in 2003. Receiving an undergraduate degree from Baylor University, she also has a master’s degree in higher education from Texas A&M University. Jane is the author of seven published books and lives in Fairfax, Virginia, outside of Washington DC, with her husband and sons. www.janecook.com and www.americanphoenixbook.com 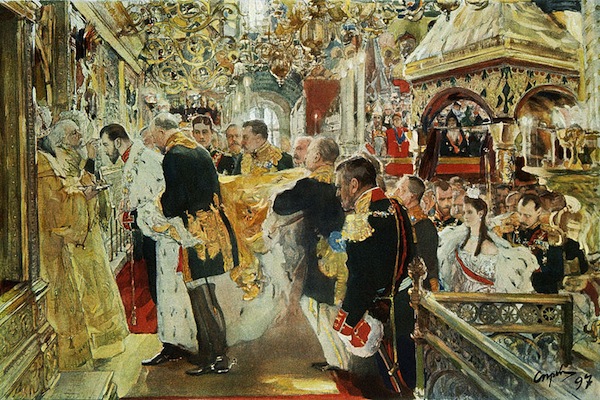 From duels in diplomacy over the Syrian war to blades on Olympic ice, it’s hard to imagine a time lately or in the past several decades when America and Russia haven’t competed against each other for power on the world stage.

That struggle is why Boston Globe reporter John Powers knew the talk of an American-Russian back-stage bargain in Olympic figure skating was outrageous.

“The rumor, proffered on Saturday by L’Equipe, the French sporting daily, from an anonymous Russian coach, was that Russia and the U.S. had made a deal to cut the Canadians out of two gold medals, with the Yanks helping the Russians win the team event. To anyone that knew a loop from a lutz, that was ludicrous,” Powers reported prior to the team figure skating competition at the 2014 Sochi Olympics.

The next day, when Russian President Vladimir Putin smiled from the audience as the Russian team won the gold medal, Russian ice dancer Elena Ilinykh proudly proclaimed to an American broadcaster: “Russia is the best. Russian figure skating is coming back. That’s the message we want to send to the world.”

Such boasting of who is the best is the message on just about anything. Yet the official relationship between Russia and America started on firmer footing with a different type of power play.

While they weren’t BFFs, teenage texting for best friends forever, the official relationship between the two countries began strongly, with Russia providing cover for fledgling America in global politics and trade.

Near the end of the American Revolution, the Continental Congress sent an envoy to Russia in 1780. Francis Dana, accompanied by a teenage translator, John Quincy Adams, arrived in St. Petersburg only to discover that Catherine the Great refused to recognize America’s independence because Russia was allied with England. The USA would have to wait almost three decades to officially make friends with Europe’s largest country.

By 1809, things had changed. Russia’s Emperor Alexander I, Catherine’s grandson, found himself in a struggle with Napoleon, the emperor of France. They competed directly for power on Europe’s political stage. Ditching his alliance with England and officially favoring France, Alexander realized that England needed another country to rival its commerce in the trade wars on the open but British-dominated seas.

“That some great commercial state should be supported as their rival, that the United States of America was such a state, and the highest interest of Russia was to support and favor them,” John Quincy Adams recorded not long after his first meeting with Alexander’s foreign minister in St. Petersburg.

By this time John Quincy Adams, the son of President John Adams, was age forty-two and down on his luck politically after losing his dream job and resigning from the US Senate. Then James Madison, the nation’s new president, appointed John Quincy as a minister plenipotentiary, a rank below ambassador, to Russia. Adams’s enemies were thrilled to get him out of the country while his friends called his appointment an “honorable exile.”

Hence, while Alexander looked to America as the rising power to compete with England in trade, President Madison strategically sought an alliance with Russia because it was “the only power in Europe which can command respect from both France and England.”

Madison and Adams understood the opportunity. If Russia, the largest country in Europe, recognized American independence and accepted U.S. trade, then America would have some leverage against England, whose trade and impressment policies were abusive toward the USA.

Adams got to work. Unable to compete financially with the other diplomats -- his salary was $9,000 while Napoleon’s ambassador to Russia enjoyed a $300,000 purse string -- he tried other methods to garner the emperor’s favor.

Taking a sincere and intellectual interest in Russian culture, he visited churches and factories and took walks with Emperor Alexander among St. Petersburg’s canals and architectural beauties, such as the Winter Palace. They talked about global politics, the weather, literature, and even the emperor’s allergies to wool, which gave him hives.

John Quincy’s wife, Louisa, joined in the diplomatic wooing. Gifted with the ability to speak perfect French, she also encountered the emperor on strolls, championed the smarts and virtues of American women, and praised the art and paintings in the emperor’s museum, the Hermitage.

In fact, the emperor first publically announced his intentions to trade with America through a social gesture. When he chose to dance with Louisa at a ball hosted in honor of Napoleon’s marriage, he created a stir. Women whispered in wonder behind their fans while the eyebrows of some diplomats furrowed in disapproval.

The French envoys, however, got the message. They soon began inviting John Quincy to dinners and social gatherings. One even suggested that he should become the U.S. ambassador to Napoleon. Sensing a trick as much as detesting the thought of kissing Napoleon’s Don Quixote hand, Adams declined.

His efforts with the czar, however, paid off. Soon John Quincy and Louisa began receiving the same treatment as the higher-ranking French ambassador -- special seats at dinners, the ability to use the emperor’s family palace entrances to attend large events, and the use of the emperor’s courier to send correspondence to western Europe.

Then, when America went to war against England in 1812 and Napoleon turned on Alexander by invading Russia, the emperor proved his friendship to America and Adams in a significant way. He offered to mediate the War of 1812 by hosting peace talks between England and the USA.

While doubting that England would agree, Adams and Madison jumped at the chance.

“The issue of this friendly interposition of the Russian Emperor, and this pacific manifestation on the part of the United States, time only can decide,” Madison concluded.

They were right. Alexander’s power play ticked off the English. The British prime minister secretly complained that the emperor was now “half an American.” No one would dare say that about Vladimir Putin today.

In some ways, Alexander was half American. Tutored in Western political theories, he was intrigued by America’s representative government, which he considered “wise and just.” He was also impressed by his honest, frugal, sincere, and unpretentious Boston friend. By this time, John Quincy Adams was considered the “father of diplomacy” in St. Petersburg.

Though rejecting Russia’s mediation offer, the British prime minister realized that he had to do something. Instead he offered to directly negotiate with America.

Thus, Adams left St. Petersburg and played an important role as one of the U.S. negotiators who crafted the Treaty of Ghent. Issued on December 24, 1814, the peace treaty ended the War of 1812.

While neither side gained territory, it firmly established America as sovereign, independent power. England and America never again went to war against each other and emerged as allies.

The Bolshevik Revolution that ended three hundred years of imperial rule in Russia in 1917 and launched the Soviet era changed Russia’s relationship with America. World War II and Cold War threats of nuclear annihilation turned America and Russia into competing superpowers. While official friends today with common and competing interests, frosty undertones of distrust nip at the heels of diplomats and come out in the boasts of figure skaters.

Yet both countries have reasons to boast about the start of their official relationship.

Russia’s support of America through Emperor Alexander helped to leverage the end of the War of 1812, enabling America to become a respected power on the world stage -- a phoenix. It also transformed Adams into an experienced statesman -- also a phoenix -- launching him to the position of secretary of state and president. Adams is the only U.S. president who resurrected a dead political career by way of success in Russia.

Alexander’s support for America showed the English and Napoleon that he was no push over. U.S. trade ships brought his country much needed material goods, from indigo to cotton and sugar to coffee beans. He would be his own man. Alexander proved to the world his might in 1814, when he defeated Napoleon with his Russian army and its allied forces.