Michael K. Honey is Fred and Dorothy Haley Professor of Humanities at the University of Washington Tacoma, and author of Going Down Jericho Road: the Memphis Strike, Martin Luther King’s Last Campaign. 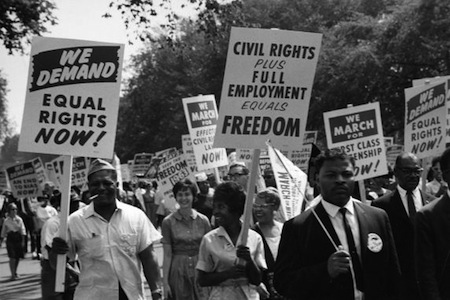 A quarter of a million people rallied “For Jobs and Freedom” at the Lincoln Monument in Washington, D.C., on August 28, 1963, and tens if not hundreds of thousands will do so again at this year’s fifty-year commemorations of the event.

The March for Jobs and Freedom came one hundred years after President Lincoln’s Emancipation Proclamation. Recognizing the unfulfilled promises facing African Americans, King wanted President John F. Kennedy to issue a second proclamation to open the way to full civil and voting rights. But he demanded more than that: King and March organizers could not separate civil rights from people’s economic needs, and we should not do so today.

At the time of the 1963 march, most Southern states prohibited African Americans from voting. Segregation laws and practices in many parts of the country prohibited African Americans, Asian Americans, Native Americans, and Mexican Americans from using restaurants, parks, libraries, and even cemeteries reserved for so-called “white” Americans. People of color risked beatings, arrest, and even death when they stood up for their rights. Even in Detroit, Michigan, where my parents grew up, black Americans could not buy a house in white neighborhoods without the threat of being bombed. Lack of access to good jobs was pervasive. In Tacoma, Washington, where I live now, both white-collar jobs and white neighborhoods remained closed to African Americans and other people of color.

The March on Washington was the brainchild not of King, but of A. Philip Randolph, the long-time Socialist Party organizer of the sleeping car porters union, and dean of black labor and civil rights activism. In 1941, he had called for an all-black and labor-based march on Washington to protest the exclusion of African Americans from war-time jobs, prompting President Franklin Roosevelt to issue an executive order opening up defense industry jobs at places like Boeing aircraft on a non-discriminatory basis. The nation, though, continued to struggle with the racial and gender exclusion that locked millions of Americans into poverty.

At the March on Washington in 1963, Randolph renewed his demands. The chief organizer of the march, Bayard Rustin, a gay African American man whose peace and civil rights activism was closely tied to his socialism, had worked for twenty years on a parallel track to Randolph. Black women community and union activists provided much of the backbone for organizing the march, which created a powerful civil rights-labor and inter-religious alliance. A similar alliance of unions and civil rights groups promises to make the fiftieth anniversary march highly significant.

On a hot August day in 1963, King challenged us to fulfill our country’s foundational creed, that all are created equal and should have an equal chance in life. After the march, he worked with Rustin and Randolph to demand a “Freedom Budget for All Americans.” It was a blueprint for the Poor People’s Campaign of 1968, in which King called on government to shift its spending from warfare to programs investing in housing, health care, education, and family waged jobs to build a sustainable economy that would benefit everyone.

Fifty years since 1963, King’s goals are still unattained. Yes, we have a black President and a somewhat expanded black middle class. But racism still infects our economic and educational systems. Prison remains a more common destination than the halls of higher education for young men of color. Violence, as the death of Trayvon Martin suggests, is an all-too-present reality. Various states are suppressing and gerrymandering the votes of poor people and minorities, with the Supreme Court as a willing accomplice.

In 1963, King decried the fact that most African Americans lived “on a lonely island of poverty” in the richest nation in the world. Today, the richest one percent of the population owns more wealth than the bottom ninety percent combined, and millions of people of all races and ethnicities are locked into poverty and unemployment. King insisted that civil and voting rights only provided the “first phase” of the struggle for the American Dream. True freedom for all required a “second phase:” King believed that everyone should have an equal opportunity to earn a decent living, access to good housing, education, and a decent life, and he died fighting for union rights in Memphis.

Fifty years since we heard King sing out, “I have a dream today,” we need to remember the full range of issues raised by the March on Washington for Jobs and Freedom. King taught us to dream big. King said it is possible to end racism and bigotry, poverty and war, and to move toward a beloved community that respects the dignity and worth of every person. We need an inclusive coalition and an expansive agenda for Jobs and Freedom for all more than ever.

Stand up, America, for the Dream – all of it!