In Defense of the Late, Great Howard Zinn

Norman Markowitz is a professor of twentieth-century U.S. political history at Rutgers University, where he teaches from a Marxist perspective. He received his PhD from the University of Michigan in 1970. 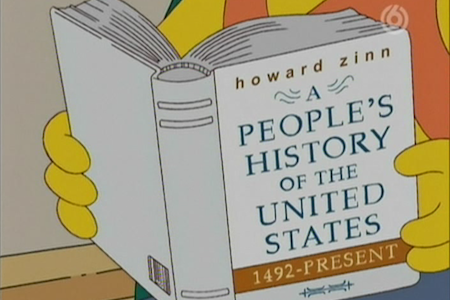 A People's History of the United States, possibly the only history book to ever make an appearance on The Simpsons. Via WikiSimpsons.

The former right-wing Republican governor of Indiana, Mitch Daniels, now president of Purdue University, launched a contemptible but predictable assault on the late Howard Zinn, part of wave of attacks which have rightly been called “the assassination of a dead man.”

Meanwhile an informal poll taken last year by the History News Network, asking historians to name the "the least credible history book in print" had Zinn's, whom I had the privilege of knowing, and his A People's History of the United States come in “second.” Daniels has demanded to a state education official that this “truly execrable piece of disinformation” not be in use in Indiana schools.

First, let’s look at the nonsense results of the poll. Have the respondents looked at the books that are in print? Racist, reactionary works of history portraying slavery in the U.S. as a benign system, attacking Franklin Roosevelt for being behind the Pearl Harbor attack, hailing Joseph McCarthy has a heroic statesman?

And those are merely a few highlights of works about U.S history. And then there is Pat Buchanan’s Churchill, Hitler, and the Unnecessary War, whose interpretations of World War II would have won prizes from Hitler’s Reich Ministry of Propaganda seventy years ago.

The historians who are dismissing Howard Zinn today are giving left-handed compliments to the influence of his A People's History of the United States, which has reached tens of millions through the world.

A People's History was and is a general text, like William Appleman Williams's Tragedy of American Diplomacy and Contours of American History -- and for that matter Richard Hofstadter’s American Political Tradition and Age of Reform. Good history, as a distinguished professor of mine at the University of Michigan forty-five years ago, the late John Higham, is not based on the “jam-packed synthesis” saying everything from all sides that you are expected to say with footnotes and then, "this was my interpretation of this statement." You end up saying nothing. All historians make choices as they develop their narratives. Williams and Hofstader were in their general texts as historians no better or worse than Howard Zinn. Their choices were different based on their frameworks. Howard Zinn, like William Appleman Williams, challenged the dominant ideology the conventional wisdom. His success tells us more about that conventional wisdom, its relevance, and also those who purveyed and continue to purvey it than his work

Frankly, I have my own interpretative difference with Howard Zinn on his treatment of Columbus, the American Revolution, and other issues, but that does not in any way limit my enormous respect for him as both a scholar and an activist, the opposite of many of his critics, the “scholar squirrels” as Gore Vidal called them, who amass great quantities of facts and footnotes and then bury them, either afraid to interpret them outside of conventional wisdoms or really not having any intellectual framework that would enable them to do so.

As a student at City College and a graduate student at the University of Michigan I learned to read between the lines of such works, taking what I regarded as the honest fair data from them and ignoring the interpretations that often contradicted such data.

The New York Times article quotes a number of historians who have criticized Zinn -- who, by the way, was a political scientist and not a historian -- defending his “right” to his interpretations. If this were the 1950s, that would be very important. Today, I would say, “big deal.” Some of these writers also have, in textbooks and other works, written broad interpretive histories of events which have had limited sales and recognition, to say the least.

It is the influence of Howard Zinn’s work in the U.S and internationally which Daniels and his political associates seek to censor and which some of his critics perhaps envy, along with his remarkable ability to beat the academic system.

John Silber, the viciously right-wing president of Boston University, denounced Zinn when he was a faculty member and froze his salary. In 1988, when I participated in a doctoral dissertation defense in history on a committee on which Zinn was a member (traveling to Boston University) the travel expenses and hotel accommodations expenses that I was supposed to receive were blocked, I was told, because Silber found out that Zinn was on the committee. Actually, this was the first time in which I was the victim of a kind of red-baiting where I had not been the target but an “innocent bystander,” and I found that amusing.

Meanwhile, Howard Zinn’s A People's History of the United States earned him very large sums of money, greater than whole departments of his critics. In our capitalist society today, this is the kind of retribution that the capitalist class most understands.

John Silber (who actually ran as the Democratic candidate for governor of Massachusetts in 1990 in a bizarre election in which progressive voters voted Republican) died last year. Howard Zinn died three years ago. Silber is and will continue to be an ugly footnote to history, except perhaps for Mitch Daniels and his ilk.

Howard Zinn, following the tradition of the founder of the Progressive School of U.S. history, Charles Beard, wrote a “usable past” for the people, not for the economic/political establishments and their academic and popular servants. Beard, Williams, Zinn, and others had had to endure the vilifications of inquisitors that their works were “anti-American” because they disputed policies which usually resulted in disaster for the American people. That is an undertone of some of the attacks today.

He understood, unlike his academic critics, that intellectual freedom(which academic tenure gives those who receive it in the university world) means nothing unless you use it. And he used it brilliantly. Zinn's diverse work, books, articles essays, plays, audio and video materials available through the internet, will continue to make history relevant to contemporary society whereas the work of his critics will be read and catalogued with the proper footnotes only be those like themselves.