"Being a Professor Will No Longer Be a Viable Career." 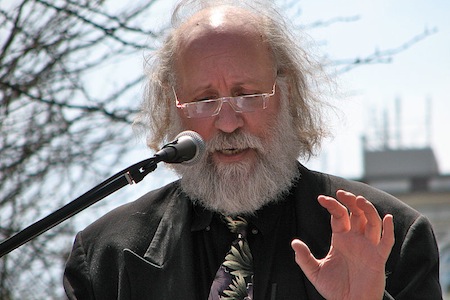 The academic freedom of professors is under siege, Cary Nelson, former president of the American Association of University Professors said during his opening remarks for that organization's annual meeting in Washington D.C. yesterday. Universities are threatening to hijack the intellectual property rights of faculty members over their course material, he argued, and the consequences of that could be extreme.

“If we lose this battle for intellectual property,” Nelson said, “it's over. Being a professor will no longer be a viable career. It will be a service industry. That's it.”

Nelson said that the advent of massive online open courses – commonly referred to as MOOCs – offer the potential for tremendous disruption not just in terms of jobs and educational options for students, but professors' control over their course content.

In the past, professors typically held the intellectual property rights for their courses, largely because unlike with patents, course content was not profitable for the university. MOOCs, however, offer the potential to monetize individual classes. Coursera and other MOOC providers typically have language in their contracts explicitly granting universities an ownership stake in online content; however, universities do not necessarily share that stake with the faculty members who actually create the content.

“MOOCs do not need ownership,” Nelson said. “It's bullshit. … Do you want to be locked out of your own course?”

The end result of this marketplace logic, Nelson warned, will be colleges and universities arguing that they have a financial interest in any content produced by a professor, up to and including books and their royalties.

“This is an issue serious enough to strike over if you are a collective-bargaining campus,” Nelson said, arguing that it may even be preferable to sacrifice salary increases in favor of protecting intellectual property rights.

There is a professor on his campus, he noted, who made nearly half a million dollars from one of his textbooks. That's nearly five times his annual salary.

To combat the threat, the AAUP is issuing a book full of recommendations for collective faculty contract negotiations through the University of Illinois press, along with web resources.

The disruptive potential of MOOCs filled many presenters with dread.

MOOCs are “techno-utopian” enterprises, said Steven Weiland, a professor of educational administration at Michigan State University. He argued there's a tremendous amount of elitism wrapped up in the arguments of MOOC proponents.

Thomas Friedman, the New York Times columnist who has been one of the great popularizers of online education, often argues that “average is over, Weiland said. “To the people at Cambridge (Mass.) and Palo Alto, average is indeed over. There's people at Harvard, MIT, and Stanford, and there's people who are average.” Faculty at a Midwestern regional university, he said, are hopelessly “average” compared to Harvard faculty like Gregory Nagy, a popular classics professor who will be leading one of his most famous classes on Greek heroes on edX in the fall.

"Average” faculty, Weiland said, will be subject to the kind of unsympathetic management advocated by foundation heads like William G. Bowen, president emeritus of the Mellon Foundation, who wrote in a recent book that “the days are over when faculty can ... expect to have complete control over the tools they use.” Bowen didn't mean faculty like Nagy or Michael Sandel, Weiland said. He meant professors like Weiland himself, and most of those present at the AAUP.

Still, others were more optimistic. Rochelle Smith, a professor of English at Frostburg State University in Maryland, told a group that her department, when pressured by their administration to redesign a freshman writing course “for the twenty-first century,” decided to focus on the “soul” of the course -- the writer-reader relationship -- as opposed to merely teaching the “powerful magic” of “wikis, web clouds, and woordles,” while at the same time acknowledging their importance. Heather Kenny, who teaches in the professional studies faculty at Edinboro University of Pennsylvnia, presented a “best online education practices” paper to the rapt attention of her audience.

And even critics of online education -- and MOOCs in particular -- acknowledged the potential of the format to reach hitherto disenfranchised students around the globe. As one professor from Ethiopia said, MOOCs grant access to more and more students around the world. “Students in sub-Saharan Africa are getting knowledge directly from Stanford and Harvard professors.” That's never happened before.