Pearl Duncan, a New York author, was granted her noble ancestors’ coat of arms in 2005. She is completing a book about using DNA and genealogy to search for ancestors, and one about the identity of the eighteenth-century merchant cargo ship discovered in the summer of 2010 in the foundations of the World Trade Center. 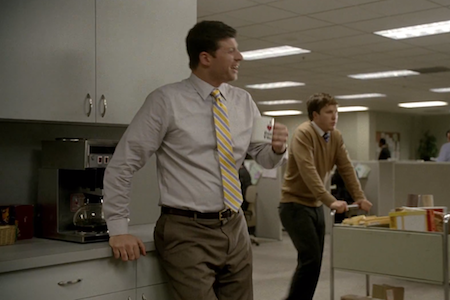 It was appropriate that in the pre-game festivities leading up to the Super Bowl from New Orleans, with so many of the musicians descended from African American ancestors who remembered their native language(s), played the “Iko, Iko” song, directly created from their ancestors’ blended languages.

What do we do when as a people, we are so damaged by history, we see and hear the world only through racial eyes and ears? I ask this question as I remember watching an ad expert on NBC's Today Show discussing Volkwagen's Super Bowl ad, in which a white Minnesotan worker speaks in a Jamaican accent as Jimmy Cliff sings a reggae-infused version of the old Partridge Family number "C'mon Get Happy" in the background. She sat with her hands folded frighteningly across her stomach. She said she’d never heard anything so racist. She said the ad was saying black people are happy. She was, incidentally, a white advertising specialist.

But despite her arguments, there are millions of people driving to work and school this morning, singing the song, remembering the ad, and smiling. They get the get happy message, because they remember the cheerful feelings of the historic reggae music -- and possibly actual island vacations. And Volkswagen wants them to transfer that happy feeling to their cars. (The ad has over eight million hits on YouTube.)

I also saw Soledad O'Brien's segment on the ad on CNN, where Christopher John Farley, a Jamaican American editor from the Wall Street Journal, explained that from a historical point-of-view, the ad reminded him of abuses of black cultural images in the media. Charles Blow, the op-ed columnist from the New York Times was even more critical; he called the ad "blackface with voices."

Though I am the descendent of Jamaicans, and the author of a forthcoming book on the cultures of my medieval African ancestors, nevertheless I saw the Volkswagen ad and the various responses not through the lens of race but through the lens of social class. As a yacht racing writer, I remember seeing yachtsmen from the U.S., Canada, France, Australia, New Zealand, England and other places embrace and celebrate everything Jamaican, after finishing the Miami to Montego Bay Yacht Race, and everything Antiguan during Antigua Yacht Racing Week. These are yachtsmen and their families who spend up to half a million dollars building and racing yachts celebrated the music, food and culture. The wildest celebrants were executives from corporations. Once they set foot on the islands, they became more Jamaican and more Antiguan than the locals, because the sporting island feeling is what they were purchasing and celebrating. They partied, sang reggae songs, danced and spoke the language.

On the other spectrum of the cultural class lenses, I saw middle-class tourists, first-time overseas travelers, honeymooners, families and students who had saved their hard-earned money, who took the inexpensive charter flights to get that island vacation feeling. Before I was a travel writer, I too was a student on those discounted flights. After I became a travel writer, even after visiting and writing about thirty-two Caribbean islands, I continued to travel on the charter flights, because the experience was so dramatic and so transforming. These budget travelers extended a few experiences for as long as they could.

They extended the sun and sand, their enjoyment of rum punch, their tans and their accents. I remember the first time I flew back to Newark Airport from Jamaica on a charter flight, which had only three black people on the flight, including me, a Jamaican American, and every other passenger on the flight was "talking Jamaican." I heard the accents in the seats behind me ordering drinks and food. I turned, looked at the tanned faces and laughed. The stewardesses loved it, and joined in the laughter.

What I learned then, having been born in a Jamaican family but raised in New York from a very young age, is "Jamaican" and "Caribbean" are not (or at least not only) races, but cultures. I have written about African American cultural experiences extensively, especially about the language, a blend of African and European languages that was preserved by ancestors who remembered both. The Jamaican accent is a unique blend of Twi, Yoruba, Wolof, Fon, and English.

So it was only appropriate that Volkswagen do this ad, showing that the world -- including white Minnesota office drones -- are now sharing in the joy preserved in this cultural heritage. Creoles in colonial New Orleans preserved the “Iko, Iko” song from women who were potters in Africa. James Crawford, the Cajun/Creole musician of New Orleans, recreated the song in the 1950s. Hey mama, stop fooling around, your pots are ready. He wrote the song as “Jock-A-Mo” in 1954. (Jokamo is an African jester.)

*In these languages the ancestors preserved, ikoko means pots. Nde means done. “Iko, iko, unday.” Hey, mama, stop fooling around, your pots are done. These were diligent and hard workers who had a great sense of humor.