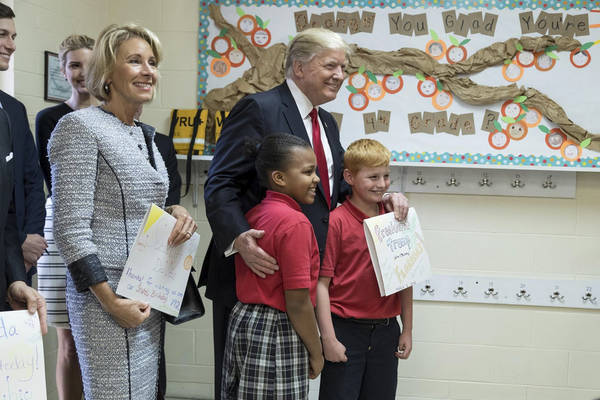 Trump hates the pandemic. Not because 130,000 Americans have died and that many more may die. He is not doing a thing to prevent more deaths. He is the only victim who matters. The coronavirus has ruined His economy, which ruins the prospects for His winning, winning, and more winning in November.

Trump has flailed at the virus, putting on display for everyone the disorganization, the inability to plan or lead, the absence of empathy for nearly everyone, and the overpowering weight of his ego. Watching his incompetence dealing with this crisis has become a national spectacle. We are liable to be blinded by that display and miss how Republicans are exploiting mass death to pursue their attack on American education.

Schools and schooling have played a central role in conservative ideology my whole life. The social eruptions around who gets to go to what school marked the 1960s and continue to this day. That was part of the fateful shift of racial conservatives across the country away from the Democratic Party, lured by the Republican “Southern strategy.” Later conservatives launched an ideological war against the American curriculum in science and history. In my lifetime, “professor” has turned from an object of respect for knowledge and intelligence to an object of ridicule on the right. Now, to deflect outrage at the Republican blundering during the pandemic, they are attacking two long-time educational enemies with unprecedented assertions of executive power.

Public schools are barely tolerated by Republicans. The long-delayed push to equalize education for black and white sent conservatives into “Massive Resistance” to any changes to the status quo, and then fleeing into private schools when they lost. Those schools and many more since then became a refuge from the discoveries of science and the transformation of our understanding of race and gender, where a certain version of Christianity is lifted into dogma. But most American children go to public school, and Republicans have fought to control national curricula by inserting creationism and rejecting revisions to great white men’s history.

They have won some battles and immensely slowed down change, but they are losing the cultural war.

Few principles have been raised as high in the conservative war for education as local control. “Local” did not always really mean local. “States rights” was the stated principle behind the Southern resistance to integration, because the push for educational equality was supported by the federal government. For people who mythologized the Confederacy, states’ rights was a natural slogan and opposition to racial equality a natural goal.

Now that they have control of the presidency under a man who knows no rights other than his own, today’s Republicans brush aside all principles, even their own, in their rush to achieve partisan goals. The principle was not so important after all, just the ideological goal.

Trump made the extraordinary demand that public schools across America open up for in-class teaching: “In Germany, Denmark, Norway, Sweden and many other countries, SCHOOLS ARE OPEN WITH NO PROBLEMS. The Dems think it would be bad for them politically if U.S. schools open before the November Election, but is important for the children & families. May cut off funding if not open!”

This is not extraordinary for the dishonest equation of European countries which have the virus under control to the out-of-control spread in the US, or for the use of ALL CAPS, or for the attack on his enemies. The President is asserting that he can control Congressionally-mandated funding for more than 130,000 local public schools. The federal government contributes about 8% of school funding, which mostly goes to schools with large numbers of low-income students and to special education. Any attempt by Trump to withhold federal funding would probably fail, but he might be able to block funds from the March CARES Act to deal with the COVID crisis. His threat might be empty, but it reveals ever more clearly both the conservative agenda to control public education and the disdain for the welfare of the most vulnerable children.

Most of Trump’s sudden assertions of executive power come from his deep need for potency rather than legal rules. Here, too, his ability to actually cut off money from public schools is questionable. But with the support of Education Secretary Betsy DeVos and the silence of other Republican officials, Trump’s tweeted assertion of executive power has become official Republican policy.

So much for enemy number 1. Enemy number 2 is higher education, also a system of public schools under state jurisdiction and private schools, many with worldwide renown. What could be a better idea than to combine an attack on all these schools with an assault on immigrants? Trump said he would refuse visas to international students and deport those in the US if their institutions did not teach them in classrooms. His effort to control thousands of colleges and universities from the White House also proved to be a flop. The administration had to drop this plan after Harvard University and MIT, supported by dozens of other universities, more than 70 higher education associations, and 20 state attorneys general sued to block the new policy and it was subjected to massive criticism.

Knowledge is power. But knowledge can be disempowering to the mythology of Republican ideology. These failed attempts to take over American education from kindergarten to graduate school will not be the last efforts by Republicans to prevent popular knowledge from disproving their alternative facts and baseless theories. They want to destroy what is best about America.