Blogs > Ronald L. Feinman > The History of Impeachment and Why Democrats Need to Act Now

The History of Impeachment and Why Democrats Need to Act Now 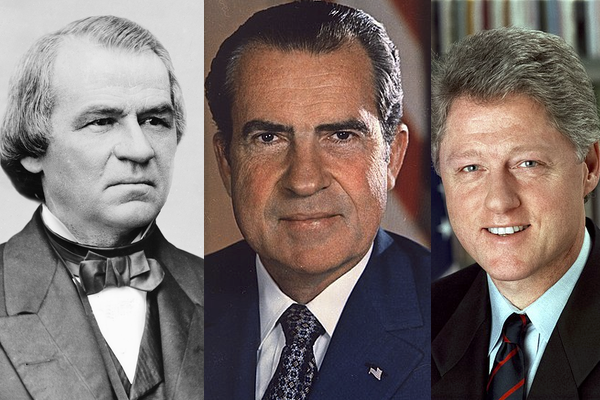 Two American presidents have been impeached: Andrew Johnson in 1868 and Bill Clinton in 1998-1999. Richard Nixon resigned in order to avoid formal impeachment. All three instances produced extreme political division and controversy.  All three occurred with a divided government—the President was from a different party than the Congressional majority.

Andrew Johnson became president after Abraham Lincoln’s assassination in 1865. Lincoln, a Republican, asked the Democratic Johnson to be his running mate in 1864 due to concerns that Lincoln might face a tough reelection campaign against former General George McClellan. Lincoln hoped Johnson would help him gain the support of loyal Democrats who appreciated Johnson’s strong support of the Union.

However, Johnson did not agree with much of Lincoln’s agenda and Republicans in Congress strongly turned against him. The inability of Johnson to work with and get along with the party that had elected him Vice President was made worse by his horrible temper, refusal to compromise, and tendency to use foul language.  No one would defend his prickly personality and racist tendencies in retrospect.

Johnson was impeached and brought to trial for breaking the Tenure of Office Act of 1867, which was designed to prevent the President from dismissing cabinet officers without approval of the Senate. Johnson fired Secretary of War Edwin Stanton, a major critic and collaborator with Radical Republicans, who wished Johnson to be removed. The law was eventually declared unconstitutional by the Supreme Court in Myers V US in 1926, 59 years after the enactment of the law.

Ultimately, Johnson avoided removal from office by just one vote. Ten Republicans joined with nine Democrats and voted to keep Johnson in office. The final vote was 35-19, one vote short of the two-thirds majority needed to approve removal. Johnson had not abused power or obstructed justice, and the impeachment case was flimsy. While his personality and viewpoints were obnoxious to many, there was no real justification for his impeachment.

Richard Nixon was facing impeachment in 1974 from the opposition Democratic Party in Congress due to strong evidence of abuse of power, obstruction of justice,  contempt of Congress, refusal to cooperate with the impeachment investigation relating to the Watergate Scandal, and other illegal acts discovered in the process of the investigation by the House Judiciary Committee.

Ultimately, the Nixon impeachment was based on bipartisan support of that committee, with seven Republicans joining the Democrats in backing three articles of impeachment against Richard Nixon. The Supreme Court also stepped in via the case of US V Richard Nixon, ordering that Nixon must hand over the Watergate tapes demanded by the House Judiciary Committee.

Additionally, bipartisan support for Richard Nixon’s removal from office was made clear by a visit of Republican leaders of Congress to the White House, including Senate Minority Leader Hugh Scott of Pennsylvania, Senator Barry Goldwater of Arizona, and House Minority Leader John Rhodes of Arizona, informing Nixon that he had lost the support of the Republicans in the US Senate, and would be unlikely to gain more than fifteen votes of the 34 needed to survive an impeachment vote to remove him.

With the strong case against Nixon, and the bipartisan move against him staying in office growing rapidly, Nixon realized it was time to leave the Oval Office, and avoid a further constitutional crisis.

Bill Clinton faced impeachment in 1998-1999 from the opposition Republican Party in Congress. Republicans were determined to remove him based on his perjury before a grand jury in the Jones V. Clinton 1997 Supreme Court case regarding Clinton’s extramarital sexual relationships, and the need for the President to testify before a grand jury.

Clinton was impeached on the last day of the 105th Congress in December 1998 and the trial was held by the new 106th Congress in January and February 1999. This violated the rule that an impeachment and trial must be conducted in the same Congress. The trial was part of the policy of Newt Gingrich and other Republicans to do what they could to undermine the Bill Clinton Presidency and plan for the upcoming Presidential and Congressional Election of 2000.

Ultimately, the Senate voted to determine if Clinton would be removed from office on two counts. On the first count, lying under oath, the Senate voted 55-45, but this was less than the two-thirds majority necessary to remove the president. On the second count, obstruction of justice, the Senate voted 50-50 to remove Clinton, again short of the two-thirds majority required. Ten Republicans joined the Democrats on the first charge and five Republicans on the second count. Although some Republicans attempted to hold a vote on another impeachment article on a separate obstruction of justice charge, this failed miserably and was not considered by the Senate.

The case against Bill Clinton was more similar to the political vendetta of the Republican Party against Andrew Johnson 130 years earlier than Richard Nixon’s offenses.  No one then or since would defend Clinton’s private behavior in the Oval Office or his lying under oath, but it was clearly an unpopular move by Republicans to impeach Clinton, and the President remained popular in public opinion polls at that time.

So, what do these past examples tell us about a potential impeachment of Donald Trump? It is extremely unlikely that Trump would be removed from office because the Senate is Republican-controlled. It is still essential, however, that Democrats push impeachment to make a political point. Just as the Republicans in 1999 pursued impeachment without consideration of how they might appear in public opinion, the Democrats should not worry about public opinion or political ramifications because Trump’s actions require accountability. If Democrats don’t take action, history will record that the Democratic Party refused to see the long term danger of Trump, and it will set a bad precedent for the future.

As I’ve written before, the case against Donald Trump is overwhelming. Donald Trump obstructed justice to prevent a thorough investigation into Russian involvement in the 2016 Presidential campaign. His son and others in the Trump campaign engaged in collusion with a foreign nation determined to undermine the candidacy of the opposition nominee, Hillary Clinton. Trump has also violated the Emoluments Clause of the Constitution, by making profits daily on his various hotel properties and other business ventures, as recent reporting has made even more clear.

He has abused the Pardon power by promising or hinting at pardons for those who break the law and enforce his illegal and unethical actions.  He has engaged in conduct that grossly endangers the peace and security of the United States in foreign policy.  He has advocated violence and undermined equal protection under the law. He has undermined freedom of the press, a threat against American democracy, and has pressured the Department of Justice to investigate and prosecute political adversaries.

Finally, Trump has shown contempt of Congress by refusing to cooperate with their investigation of his administration, a charge that was one of the three brought against Richard Nixon before he decided to resign ahead of a certain impeachment by the House of Representatives and conviction by the US Senate.

Democrats need to act before the upcoming presidential election consumes even more political energy. It is time for the Democrats to move ahead on what needs to be done:  the impeachment on high crimes and misdemeanors of the 45th President.

For more on impeachment, click on the links below:

What To Know About the History of Impeachment

George Orwell and Why the Time to Stop Trump is Now

What Should Historians Do About the Mueller Report?