What Should Historians Do About the Mueller Report? 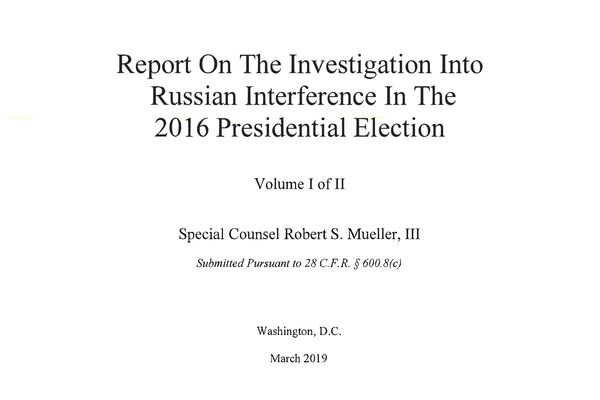 The Mueller Report, officially entitled Report on the Investigation into Russian Interference in the 2016 Presidential Election is an extraordinary document, systematic, detailed (472 pages) and thoroughly researched and documented (2,381 footnotes).  News media pundits have summarized its high points, congressional Democrats say they need more information, and President Trump has asserted that it proves there no collusion with the Russians and no obstruction of justice.

But the report itself deserves wider reading and more scrutiny and analysis than it has received. So far, for instance, no member of Congress seems to have announced that he or she has read the entire report. The media have moved on to the confrontation between the president and the House of Representatives over who can testify in House hearings.  The report itself has moved into the background too soon. Historians can help encourage people to read, reflect on, and perhaps take action on, one of the most important documents in American history. We need to be more emphatic in asserting history's role in bringing clarity to complex public issues.

Demonstrate how to draw concrete conclusions from the evidence in the report.  The Mueller report is in essence a detailed assemblage and presentation of evidence, somewhat comparable to a grand jury report. Historians can guide the public by analyzing and weighing the information in the report, analogous to what historians routinely do with evidence from the past, and reach conclusions. Historians help people understand cause-and-effect relationships, analyze and weigh evidence, and discern underlying patterns in complexity. They are adept at presentations that are fair, objective, and fact-based. Those skills can be put to work on the Mueller report both to enlighten the public and to demonstrate how people can use the report themselves. Presentations at public meetings, op-ed pieces for newspapers, and broadcasts via social media are all potential forums.  For instance, there is a great deal of information about Trump's Russian ties and why and how the Russians supported his campaign. There are dozens of pages with evidence about the president's determined attempts to sidetrack, slow down, discredit, or stop the investigation. Appendix C, 21 pages long, presents the president's written response to the Special Counsel's questions (Trump refused to be interviewed), with more than 30 uses of the phrase "does not recall" or other phrases that the report calls "incomplete or imprecise."  This evidence, appropriately analyzed, can lead to informed conclusions about Russian meddling, the Trump campaign's actions, and the role and responsibility of the president himself.

Add a historical dimension. Special Counsel Mueller's charge was to examine the 2016 election. He did not look back into history, i.e., previous attempts by foreign nations to meddle in U.S. presidential elections. Historians know that 2016 was not the first time.  In 1960, the Russians secretly approached Adlai Stevenson with an offer to support his campaign. (Stevenson rebuffed them and decided not to seek the Democratic nomination that year.) In 1888 the British ambassador indicated a preference for incumbent Grover Cleveland, running for re-election. (The move backfired, alienating voters and probably costing Cleveland the election.) If the Russians tried in 1960, and got caught in 2016, it seems like a good bet that they may have tried in some of the 13 elections in between.

Compare the report to previous high-stakes reports. Historians can provide an important perspective by comparing the Mueller report to previous reports on critical national issues. In particular, they can remind the public why the investigations were undertaken, what the reports said, their strengths and weaknesses, public reaction, and what (if any) action they engendered. Examples might include the 9-11 Commission Report (2004), which analyzed intelligence failures before the attacks;  reports (6 volumes) (1976) of the Senate Select Committee to Study Governmental Operations with Respect to Intelligence Activities, which led to reform of federal intelligence agencies; reports of the National Commission on the Causes and Prevention of Violence, particularly Violence in America: Historical and Comparative Perspectives (1969) which emphasized lack of employment and educational opportunities in inner-city neighborhoods but did not lead to concrete actions and the issues continue today; the President's Commission on National Goals, Goals for Americans. (1960) which emphasized individual initiative and called for elimination of barriers to equal justice and opportunity and engendered considerable public discussion but no solid policy initiatives; the Congressional Joint Committee on the Investigation of the Pearl Harbor Attack's Report (1946) which exonerated President Franklin Roosevelt from blame for the surprise 1941 attack and led to policy changes, including the National Security Act and creation of the Department of Defense in 1947; and the House of Representatives' investigation and report (1792) on the defeat of General Arthur St. Clair by Indians in the Northwest Territory, which occasioned the first assertion of what we now call executive privilege, by President George Washington, in response to the House's request for documents on the military campaign.

Use the report to call attention to the relevance of the past to the present. The Mueller report and the issues it probes are good examples of where historical insight would help. This points the toward the need for more of what might be called "historical mindedness" in public debates of critical issues these days. "So long as the past and the present are outside one another, knowledge of the past is not of much use in the problems of the present,” wrote British philosopher and historian Robin G. Collingwood in his 1946 book The Idea of History. “But suppose the past lives on in the present; suppose, though encapsulated in it, and at first sight hidden beneath the present’s contradictory and more prominent features, it is still alive and active; then the historian may very well be related to the non-historian as the trained woodsman is to the ignorant traveler. ‘Nothing here but trees and grass’, thinks the traveler, and marches on. ‘Look’, says the woodsman, ‘there is a tiger in that grass’ ".   There is more than one "tiger" in the Mueller report.

Monitor preservation of the investigation's records.  Mueller's two-year investigation amassed a great volume of interviews, court filings, testimony, FBI investigative material, staff reports, and other records. These are official records of the Justice Department.  Historians (and others) need to call attention to the need for them to remain intact and at some point be transferred to the National Archives and Records Administration. The files should be opened to researchers in a timely fashion and with minimal restrictions. They can be expected to reveal a fuller picture of Russian interference, presidential obstruction, and the impact of both on the 2016 election.